World War II, a period of tremendous hardship for Britain as a nation, was paradoxically a period of great prosperity for its cinema.  From 1939 to 145, average weekly attendance rose from an estimated 19 million to over 30 million and gross box office receipts nearly trebled.  The government, quick to recognize the cinema’s potential as a propagandist’s tool, financed many  major productions aimed at educating the British public on the war effort and strengthening morale.  While these were generally well-received, the sameness of their themes had begun to breed boredom by 1943.  Weary of the war, the British sought escapist entertainment in the cinema.  Edward Black, production chief of Gainsborough, was quick to sense the popular mood and capitalize on it.  Starting with The Man in Grey (1943), he inaugurated a series of melodramas rooted in the nineteenth century stage melodrama tradition that had packed working class audiences into the penny theatres to thrill to tales of wicked squires, wronged innocents and virtue triumphant.  As Jeffrey Richards writes, the world of Gainsborough melodrama was “a world of rollicking, rumbustious romps in Restoration or Regency England, of whip-wielding lords and bosom-heaving ladies, of highwaymen, gypsies, moonlit rides, of thwarted love and of steaming passion, a vivid, vibrant world inhabited by such smouldering sex-objects as Margaret Lockwood and Jean Kent, James Mason and Stewart Granger.”  The flamboyant excesses of such films were part of their charm; “Spectacular costumes, conspicuous consumption and extravagant goings-on did take people out of themselves and help them to forget for a little while flying bombs, clothing coupons and fuel shortages.”  Fanny By Gaslight is one of the most successful of the Gainsborough melodramas. 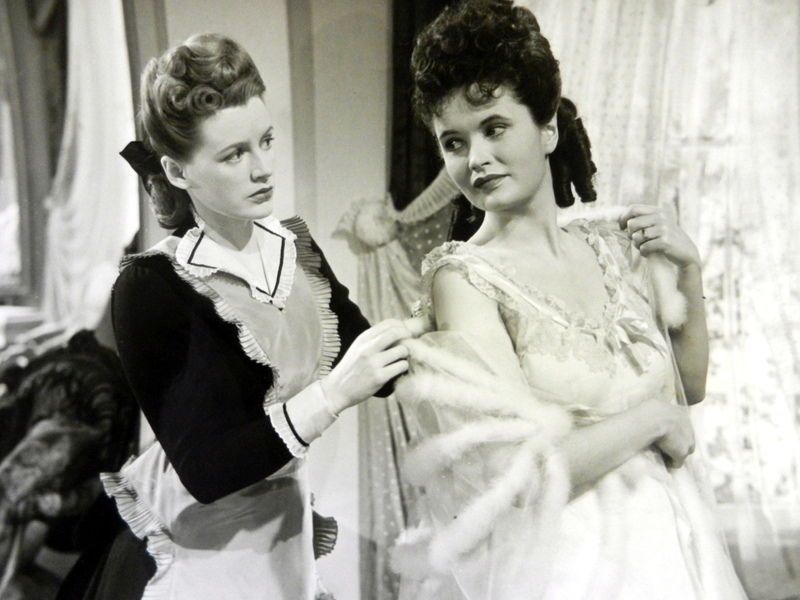 British film critics hated the pictures as much as the public loved them.  Jeffrey Richards explains: “The British critical establishment in the 1940’s was rooted in certain traditions–of documentary real sim, of literary quality and of a middle class improvement ethic.  Gainsborough melodramas offended against all these criteria of excellence.  They were not only not realistic; they were defiantly anti-realistic.  They did not derive from respected literary sources, of the kind which earned plaudits for David Lean’s beautifully crafted film versions of Dickens, or Carol Reed’s atmospheric adaptations of Graham Greene.  They were futhermore definitely neither improving nor uplifting.”  Actors too disliked the films–Stewart Granger denounced them as “junk” and James Mason notoriously despised them.

Looking back after forty years, however, it is possible to discern certain currents of social criticism in the Gainsborough melodramas that might provide a reason for their popularity beyond escapism.  Their use of strong, dominant heroines in control of their destinies (though not necessarily morally admirable) reflected a world where women were becoming the core of the war-time labour force.  By 1943, 90% of single women between 18 and 40 and 80% of married women with children over 14 were working.  With their jobs came increased responsibility, independence, mobility and self-esteem, benefits many of them were reluctant to give up with the end of the war.  Margaret Lockwood, the heroine of the Gainsborough melodrama The Wicked Lady (1946) spoke for many women when she cried out: “I’ve got brains and looks and personality.  I want to use them instead of rotting in this dull hole.”  The Gainsborough melodramas also raised the question of class divisions (since the majority of the villains were aristocrats) and called for their breakdown–one of the most frequently demanded social changes throughout the war.  By displacing the anxieties of their own historical period into one far removed from contemporary times, the Gainsborough melodramas avoided the censor’s attention while still raising vital issues of the day.  They prove Richards’ pronouncement that “historical films…are almost never important for what they tell us about the eras in which they are set, but they may have a good deal to tell us about the periods in which they are made.”