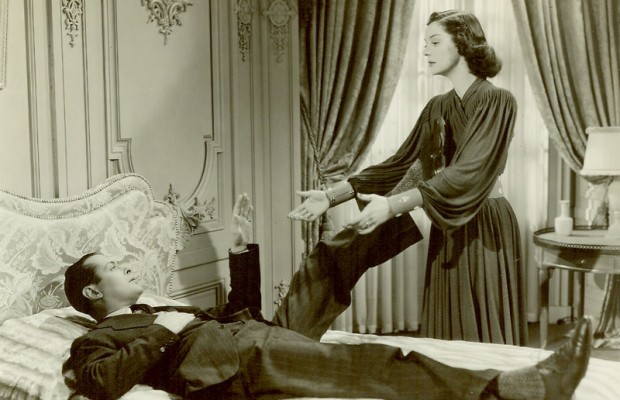 Toronto Film Society presented Fast and Loose (1939) on Monday, February 22, 2016 in a double bill with A Night to Remember as part of the Season 68 Monday Evening Film Buff Series, Programme 5.

This film is the second in a series featuring the characters Joel and Garda Sloane.  The first was Fast Company (1938) starring Melvyn Douglas and Florence Rice and the third was Fast and Furious (1939) starring Franchot Tone and Ann Sothern.  In Fast and Loose Robert Montgomery and Rosalind Russell star as Joel and Garda Sloane.  In this outing the Sloane’s are on the hunt for a missing Shakespeare manuscript.  The fine supporting cast includes Reginald Owen, Rlaph Morgan (brother of Frank Morgan) and the ubiquitous Ian Wolfe.

Ian Wolfe is a very familiar character actor who had a long career on stage, screen and television.  He was born in Canton, Illinois in 1896 and studied singing, dancing and pantomime, and took a short course at New York’s American Academy of Dramatic Arts.  He served in World War One in the Medical Corp and made his stage debut in 1919 in The Claw starring Lionel Barrymore.  He went to Hollywood in 1934 to work with Barrymore on the radio show Mayor of the Town.  He made his film debut that year in a small role in Irving Thalberg’s The Barretts of Wimpole Street.  That role began a 56 year career appearing in 179 feature films supporting many prominent actors.  Among the more renowned films he appeared in were Mutiny on the Bounty (1935), Foreign Correspondent (1940), Saboteur (1942), Mr. Blandings Builds His Dream House (1948), Julius Caesar (1953), Seven Brides for Seven Brothers (1954), THX 1138 (1971), Reds (1981).  His last film appearance was with Warren Beatty in Dick Tracy (1990).  His television work included many supporting roles in shows from the Golden Age of Television through to the 1990’s.  His final television appearance was in WKRP in Cincinnati in a recurring role as the sarcastic butler to Lillian Carlson (Carol Bruce).  Wolfe wrote and self-published two books of poetry, Forty-Four Scribbles and a Prayer, Lyrics and Ballads and Sixty Ballads and Lyrics in Search of Music.  Ian Wolfe worked until the last couple of years of his life and died of natural causes at the age of 95 on January 23, 1992.  He was survived by his wife of 68 years Elizabeth Schroder Wolfe and two daughters, Moya and Diedre.