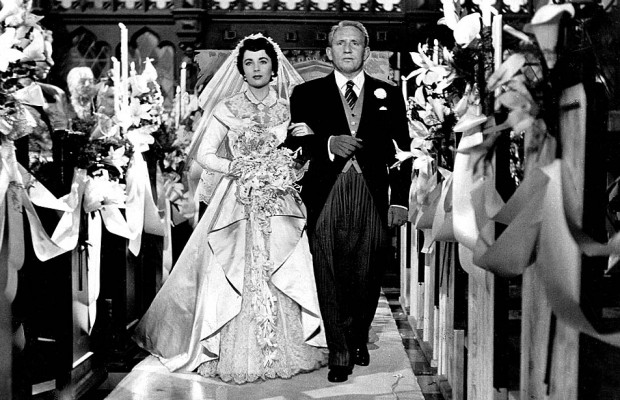 Toronto Film Society presented Father of the Bride on Monday, September 11, 1978 in a double bill with Our Vines Have Tender Grapes as part of the Season 31 Monday Evening Film Buff Series, Programme 1.

“We started filming in January of 1950.  Father of the Bride was the shortest and sweetest experience I’d ever encountered.  Working for the first time with a brilliant cinematographer named John Alton and a cast that flew through its places, the picture was shot in twenty-eight days.

Spencer was an inspiration.  His instincts were infallible.  He knew how to throw the unimportant things away, and he knew how to create the illusion of throwing the important things away too, so that they were inscribed in your mind.  His way of speaking made you feel you’d stumbled on a great truth.  You saw real life reflected in his face…and also strength.

There wasn’t a better man at comedy.  He wasn’t a mugger, at least never in scenes with other actors.  The facial contortions came when he was alone and unobserved.”

“Easily the funniest picture in town.  The customary exaggeration that is necessary in most comedies is almost  completely absent inn Father of the Bride.  There was no need for it here because there is a vast amount of latent comedy in family life, provided one has the capacity to recognize it.

There have been other pictures of similar nature, but none that we can recall at the moment which possessed the authority of Father of the Bride.  Authority is a rather formidable word to use in discussing a comedy, but in our opinion the success of Father of the Bride is due in some considerable measure to the reasonable manner in which the subject is treated.”

“I’ve never known what acting is.  Who can honestly say what it is?  A lot of people try, and they criticize actors, but I don’t think they make sense.  I wonder what actors are supposed to be, if not themselves.  I’ve finally narrowed it down to where, when I begin a part, I say to myself, this is Spencer Tracy as a judge, or this is Spencer Tracy as a priest or as a lawyer, and let it go at that.  Look, the only thing an actor has to offer a director and finally an audience is his instinct.  That’s all.  I don’t like anything about acting.  But I did very well by it.  I learned the trade well.  It’s never been very demanding.  It doesn’t require much brainwork.  Acting is not the noblest profession in the world, but there are things lower than acting–not many, mind you–but politicians give you something to look down on from time to time.”