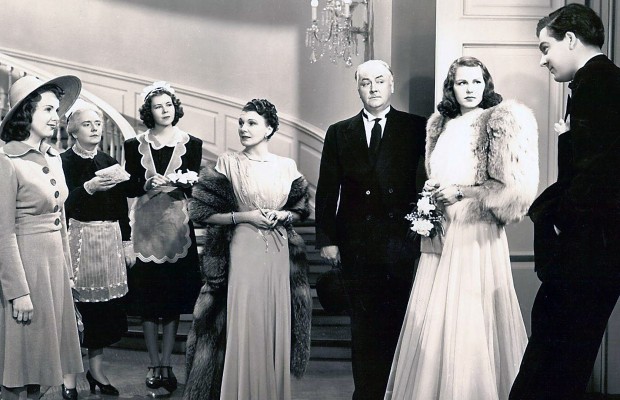 Deanna Durbin was one of the most amazing talents ever to blaze across Hollywood’s sky.  Discussions of great musicals/musical performers and comedies/comediennes always overlook Deanna Durbin.  Yet her films received twenty-eight Academy Award nominations in ten years (more than the usual people associated with musicals such as Fred Astaire, Ginger Rogers, Gene Kelly, Judy Garland, Barbra Streisand and Frank Sinatra), she got a special Academy Award in 1938 for her “significant contribution in bringing to the screen the spirit and personification of youth”, and she garnered unanimously glowing tributes from a wide selection of critics of her era.  She was an immediate sensation and one of the world’s leading box-office draws from 1937 to 1942.  Her fame was universal–in a 1939 Japanese film, The Whole Family Works, a Japanese boy worships a publicity still of Durbin.  For the next fifteen years every studio tried to develop another Durbin; even Universal kept an understudy for her in case she left them.

Deanna Durbin (Edna Mae Durbin) was born in Winnipeg on December 4, 1922 (or 1921), soon moved to California and eventually landed a co-starring part with Judy Garland in a short film at MGM entitled Every Sunday (1936).  After being dropped at MGM, she went to Universal to play a small role in a romantic comedy, Three Smart Girls (1936).  During filming her obvious talents so overwhelmed the studio that her part was built up and she was given several songs.  The film was a smashing success (it was nominated for an Academy Award as Best Picture, as was her next film, 100 Men And A Girl [1937]) and kicked off a succession of extremely popular Durbin vehicles.  Around her tenth feature her popularity slackened a bit.  Although Deanna managed to evolve from a child star to an ingénue, she lost her especially unique charms and became another pretty, talented young actress.  Her one foray into a strictly dramatic part, Christmas Holiday (1944), proved critically and popularly unacceptable, causing Durbin to lose any enthusiasm she might have had for filmmaking.  Her remaining films were formula comedies with some minor dramatic overtones.  With her last films on the verge of becoming ‘B’ pictures, she retired completely from movies in 1948 with the statement, “I don’t want to have anything to do with show business ever.”  Later announcements made it plain she had disliked Hollywood and stardom and had loathed “the concocted Durbin personality which had never had any similarity to me, not even coincidentally”; and “I’m tired of playing little girls, I’m a woman now.  I can’t run around forever being the Little Miss Fix-It who bursts into song.  I want to get out of Hollywood and get a fresh approach.”

First Love is an unabashed retelling of the Cinderella fable, smoothly directed by Henry Koster.  Koster did six of the first ten Durbin successes, including the first, and best, two–Three Smart Girls and 100 Men And A Girl.  There are some sweeping camera movements along staircases (including one on the fabulous old Lon Chaney set from Phantom of the Opera) and some ingenious long shots of Durbin singing–where close-ups would have been the expected, and cliché, method.  The earlier Durbin vehicles all had strong supporting casts.  In First Love, Helen Parish creates a memorable bitch; Eugene Pallette is a delight as a gruff “family” man; and Lewis Howard is weirdly wacky as the “sluggish” son.  Robert Stack extends Durbin’s misfortune of always being cast opposite bland leading men.  Universal did not have an impressive batch of young actors to begin with, and anyway Durbin presented a particular problem in that she couldn’t have romantic leads till First Love (where she receives her first screen kiss) and by that time her screen personae was so established that she dominated all of her co-stars.  As the New York Times mentioned in its review of First Love, “Robert Stack, in the role of Prince Charming, is chiefly to be remembered for a row of fine, white teeth.”

Deanna Durbin radiated an infectious, wholesome enthusiasm for life; each of her films had “that rare quality of making an audience feel better for having seen it.”  (Variety).  Her acting was permeated with a natural self-confidence that probably limited her range to comedy and romance–she just wasn’t convincing in stark dramas.  With her soubrette soprano voice and perfect pitch she sang effortlessly, and artlessly, to a degree unheard in films before or since.  Perhaps her most notable quality was her perfect comedy timing, both in dialogue delivery and in farcical pantomime, enabling her to rattle off comedy lines at a pace worthy of Howard Hawks while keeping it logical and funny.  Note one hilarious bit just before she sings at the ball in First Love.  In view of her stated dislike for making movies, it is surprising to find her emitting such spontaneous and zestful performances as she did.  Perhaps that’s the greatest acting of all.