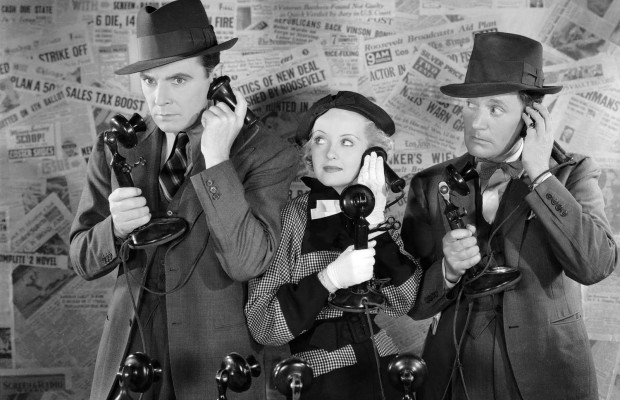 Toronto Film Society presented Front Page Woman (1935) on Monday, July 28, 2014 in a double bill with The House Across the Street as part of the Season 67 Summer Series, Programme 4.

Reporter Curt Devlin loves sob sister Ellen Garfield but believes women are “bum newspapermen”. When she learns the identity of a murdered arsonist, he calls it luck. When she goes after the murderer he gets enough evidence to have Maitland Coulter arrested. She finds a bunch of “not guilty” ballots and publishes the wrong story; he eavesdrops on the jury and gets the correct verdict. After being fired she gets a confession from the real killer and gets Coulter released.

Ruth Elizabeth Davis was born April 5, 1908, in Lowell, Massachusetts. After graduation from Cushing Academy she enrolled in John Murray Anderson’s Dramatic School and was the star pupil. Late in 1930, she was hired by Universal. When she arrived in Hollywood, the studio representative who went to meet her train left without her because he could find no one who looked like a movie star.

An official at Universal complained she had “as much sex appeal as Slim Summerville” and her performance in The Bad Sister (1931) didn’t impress. In 1932 she signed a seven-year deal with Warner Brothers Pictures. She became a star after her appearance in The Man Who Played God (1932). Warners loaned her to RKO in 1934 for Of Human Bondage (1934), in which she was a smash. She had a significant number of write-in votes for the Best Actress Oscar, but didn’t win. She finally DID win for Dangerous (1935) and Jezebel (1938)). She constantly fought with Warners and tried to get out of her contract because she felt she wasn’t receiving the top roles an Oscar-winning actress deserved, and eventually sued the studio. Returning after losing her lawsuit, her roles improved dramatically. The only role she didn’t get that she wanted was Scarlett O’Hara in Gone with the Wind (1939). Warners wouldn’t loan her to David O. Selznick unless he hired Errol Flynn to play Rhett Butler, which both Selznick and Davis thought was a terrible choice. It was rumored she had numerous affairs, among them George Brent and William Wyler, and she was married four times, three of which ended in divorce. She admitted her career always came first. She made many successful films in the 1940s, but each picture was weaker than the last and by the time her Warner Brothers contract had ended in 1949, she had been reduced to appearing in such films as the unintentionally hilarious Beyond the Forest (1949). She made a huge comeback in 1950 when she replaced an ill Claudette Colbert in, and received an Oscar nomination for, All About Eve (1950). She worked in films through the 1950s, but her career eventually came to a standstill, and in 1961 she placed a now famous Job Wanted ad in the trade papers.

The favorite leading man of star actress Bette Davis, was born George Brendan Nolan, near Dublin, Ireland. He worked in Hollywood from 1930, initially cast as farmers, doctors and partner of Rin

Tin Tin, before Warner Brothers recognized his potential as a strong leading man for some of their more temperamental female stars. One of those was Ruth Chatterton, who picked him to play opposite her in The Rich Are Always with Us (1932). This was the first of four films he made with the actress, whom he married – and divorced after two years. A specialist in dapper, sophisticated gentlemen, George gave reliable support to stars like Greta Garbo, Hedy Lamarr, Barbara Stanwyck and (eleven times) Bette Davis, though he could rarely be described as dynamic. His most memorable performances were opposite Davis in Front Page Woman (1935), Dark Victory (1939), The Old Maid (1939), and, co-starring Myrna Loy, The Rains Came (1939). When his looks dissipated and leading man roles became scarce, George gave arguably his best performance (against type) as the maniacal murderer in the Robert Siodmak-directed thriller The Spiral Staircase (1945).