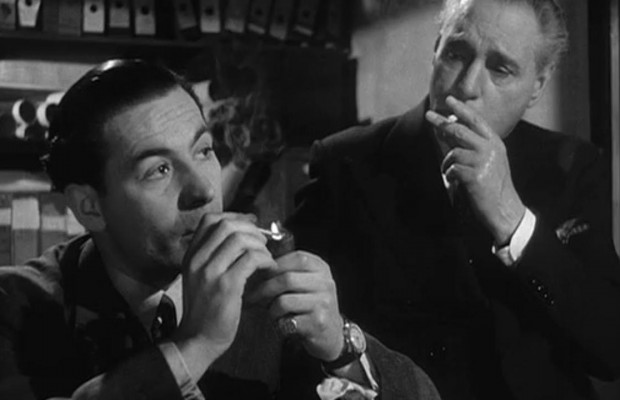 Toronto Film Society presented Green for Danger (1946) on Monday, January 18, 2016 in a double bill with The Arsenal Stadium Mystery as part of the Season 68 Monday Evening Film Buff Series, Programme 4.

Production Company: Individual Pictures.  Produced and Directed by: Frank Launder and Sidney Gilliat.  Screenplay: Sidney Gilliat and Claude Guerney, based on the novel by Christianna Brand.

Tonight’s feature stars one of Britain’s most distinctive actors in the lead, Alastair Sim.  As a bumptious but shrewd police inspector, Mr. Sim projects just he right amount of sardonic wit, coupled with an air of casual authority.

Following a pair of murders at a suburban hospital during the final stages of World War II, Inspector Cockrill arrives on the scene.  His bland accusations during the questioning of the operating room staff set the five witnesses to suspecting each other.  At other times an annoying manner conceals a quick mind gathering and assessing facts as he talks with the hospital employees.  Alastair Sim was one of those fascinating eccentrics who brightened up so many British pictures: as will be evident, his mannerisms were unique.

By contrast, the rest of the cast, though ranging from excellent to reasonably competent, seem absolutely dull.  Trevor Howard, of course, was the standout.  In common with so many British performers, he obtained his early training on stage, as well as attending the Royal Academy of Dramatic Arts.  His first movie role was a small one in Carol Reed’s The Way Ahead (1944), as a naval officer, followed by The Way to the Stars (1945), this time wearing an R.A.F. uniform.  Then came the role for which Trevor Howard will always be remembered, as the decent, married doctor who becomes involved with a married woman (Celia Johnson) in Brief Encounter (1945).  In 1949, he worked for Carol reed again and demonstrated, as the British Army major, another aspect of his personality–sarcastic and cynical.  Always a polished performer, Trevor Howard was frequently outstanding.

Leo Genn was a good actor, but his heavy, glowering countenance and brusque voice often saw him cast in authority roles or as the heavy. He was a sort of hybrid of James Mason and Anthony Quayle.  A surprising and little known fact about Leo Genn is that he was a fully qualified lawyer who had officiated at the Nuremburg Trials.

Rosamund John was a popular English leading lady of the 1940s.  Among the films she appeared in was The First of the Few (1942), as Leslie Howard’s wife, in this tribute to the designer of the Spitfire.

Incidently, the film’s title, which in itself is a contradiction in terms, has a neat explanation that becomes apparent at the climax.