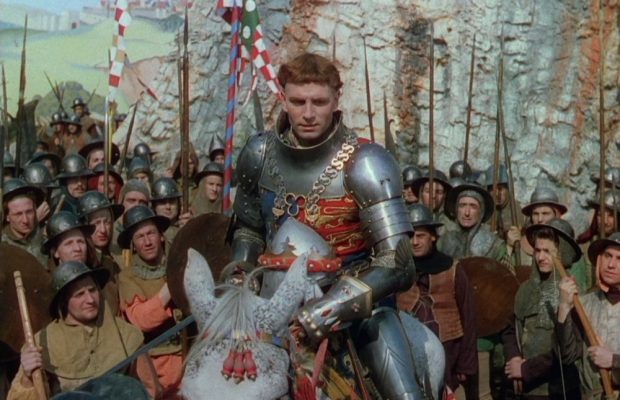 Henry the Fifth, with which Shakespearean Cinema came of age, could easily not have been made.  For its production, Two Cities films had first to secure an extended leave for Laurence Olivier from the armed services.  They had then to raise quite a lot of money, much more than was readily available.  Dallas Bower had (so the grapevine says) first conceived of filming theplay, in tune with the mood and tempo of the period.  Filippo Del Giudice suggested that Olivier should direct the intended film, as well as star.  So it was that the enterprise grew up around the man whose personality is now so surely stamped upon it.¹  What followed–as Monsieur Verdoux might put it–is history.

What Shakespeare wrote in 1599 is also history; more faithful to cold fact than some of his chronicle plays.  The date for Henry the Fifth may be quoted with unusual certainty.  There is a reference, by the Chorus before Act Five, to the Earl of Essex, campaigning in Ireland.  The film, understandably, omits the speech in question but to the play’s original audience it must have had great significance.  The play’s whole mood is epic-heroic: Henry was a beloved popular figure to the Elizabethans and so, momentarily, was Essex, their Queen’s favourite.  But in the autumn of 1599 Essex returned, unsuccessful and in something like disgrace.  Therefore the play must have been unveiled before that date, which would place its first performance at the Curtain Theatre.  Olivier’s imagined staging at the more famous Globe would, however, be appropriate to a revival shortly afterwards. 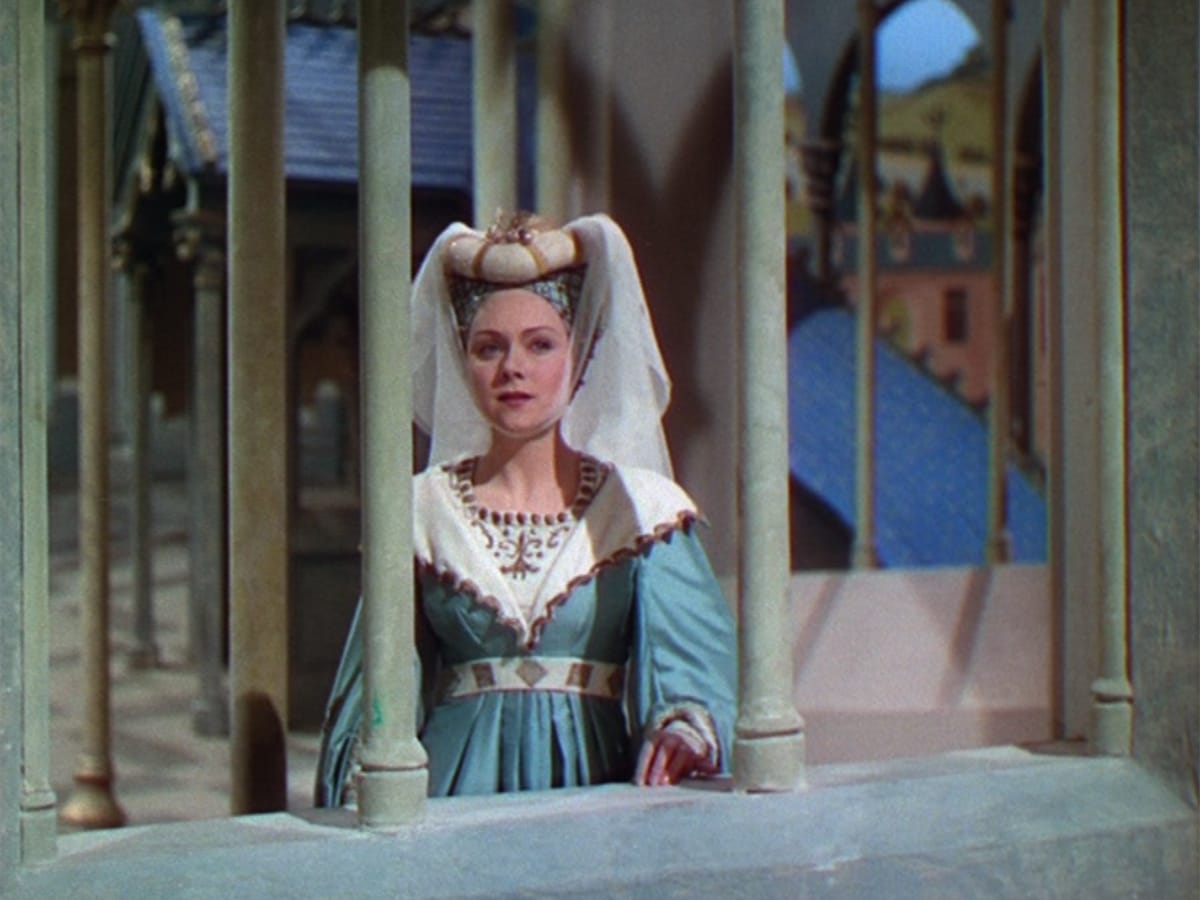 Shakespeare’s play may owe something in source to a badly preserved chronicle piece entitled “The Famous Victories of Henry the Fifth”.  It also, of course, follows on his own two-part drama of Henry the Fourth, in which Prince Hal had been shown as a likeable roisterer, slowly preparing himself for the assumption of kingship.  In the new history young Hal becomes King and his royalty is everything basic to the play (however glorious its incidentals).  This King is a Henry set at a certain distance.  His portrayal as a maker of speeches and inciter to war naturally has laid the play open to moral charges: is it jingoistic before the invention of jingo?²  In any case, humanity constantly breaks through–as in Shakespeare it always will.  It is there especially in those thoughts which are the culmination of the poet’s many musings on kingship.

“But if the cause be not good,…it will be a black matter
for the king that led them to it”

“Upon the king!  let us our lives, our souls,
Our debts, our careful wives,
Our children, and our sins lay on the king!
We must bear all.”

The Man of Theatre as Film Director

Henry the Fifth was, by popular count, the film which had to be included in this series.  Because it is so well known to so many people, I would like to analyse it in a moment in more detail than the three other features.  First, though, we might look at Laurence Olivier as a film-maker, and in the additional light of Hamlet and Richard the Third.  He has himself said that his film technique is merely to hire good actors and let them loose on a soundly edited script, without any fancy photography.  He has also remarked that as a film director he feels more creative than in any other sphere.  The two statements complement each other and are sufficiently revealing.  Olivier’s screened Shakespeare is conservative, to an extent compatible with taste and imagination and flair.  He has, certainly, been bold with the text on occasion and if others have been bolder they were for the most part indiscriminate and foolish.³  But in another respect he has lagged behind Welles and maybe even Reinhardt (plus Kurosawa and Youtkevich in quasi-Shakespeare).  That is in visual masterstrokes, the rare images which have been found to fling a Shakespeare feeling up before our eyes.  Olivier’s work is rich in decoration but of a kind to reinforce the words rather than to translate them.  He is, looked at one way, very much a man of the theatre, not the cinema.

However, audiences in 1944 (’46 in North America) must have taken a relieved breath to find him so free of theatre stiffness or pomposity.  Henry the Fifth could be seen to offer not only an intelligent grasp of dramatic form and verse speaking very superior to any heard on a sound track before.  In addition, the camerawork, though straightforward, was real camerawork.  The editing had vigour and such things as transitions between scenes had clearly been worked out in terms of colour as well as characters, pace as well as poetry.  Above all, Henry the Fifth‘s visual design was–and is–a triumph.  The sets in Olivier Shakespeare are superb, first to be looked at on their own, then to be employed.4  In each of the three pictures gentle stylisation and consistency of approach have aided and abetted each drama’s individual mould.  “The labour we delight in physics pain” and love’s labour, with Sir Laurence, is more often won than lost.

The Action of the Film

Henry the Fifth opens on a model of London featuring the Globe Theatre and soon to be matched with a set of its acting area.  May I be allowed to say, however, that we are transported back to Gloriana’s capital?  We glide above the streets and river until we arrive at the Globe, where they are raising the theatre flag for a performance, to the first strains of Walton’s superb music.  Leslie Banks, resplendent in the yellow-dominated garb of Chorus, appears on stage to speak the opening speech.  He is a first fine voice and presence in a cast composed of fine presences and voices.  Soon the young monarch himself comes on.  For a second’s alienation he throws an inquiring glance into the dressing mirror and then we move into the Archbishop’s explanation of the excuse for a war in France.  Some of this is played for comedy and it is amusing but I think mistaken fun.  Should Olivier suggest that Shakespeare’s staging was so much less polished than his own?

The comics open Act Two, Robert Newton’s splendid, gigantic fraud of a Pistol prominent among them.  They touch on the sad passing of Sir John Falstaff and Olivier, surprisingly chooses to introduce that old knight’s rejection by the king (brought in from “Henry the Fourth, Part Two” by means of Henry’s words remembered in Falstaff’s head.  For years (in fact centuries) many people have been so shocked by the callous nature of the king’s behaviour to his companion that they listen in vain to any assurance that Falstaff, being “lord of misrule”, had to be split from Henry’s company sooner or later.  It is a nice point, and one that we may never see again quite as did Shakespeare, with his passionate concern for moral order.  At least the sequence in the film is skilfully dramatic…The material on Lord Scroop’s conspiracy being excised, the picture now moves swiftly to the mounting action of the play’s third act.

Here Chorus appears once more.  He undergoes a sea change, by the travelling matte process, as we travel across the “perilous narrow ocean” into France with the citizen army.  Olivier will now unleash the cinema’s resources and show us fully the events which Shakespeare had to apologise for skimping.  It has been suggested that such a shift in techniques is mistaken.  But Shakespeare will not easily be set aside anywhere.  If we recall his words of abasement to the audience (they might be mock-abasement, at that) we will recognize their aptness still.  Their immediate cause, lack of physical scope, may have been transcended but all art is a convention, blessedly so, and not “the real thing” which it counterfeits…When four captains come on next and grumble about how things are going they include Esmond Knight and John Laurie.  These players went on to appear (in fairly small roles) in both of Olivier’s other Shakespeare films and Laurie had also been in As You Like It, as Oliver.  There follow scenes at the French Court–the princess and her gentlewoman in a gem of writing (in French) which Doctor Bowdler found some reason of his own to censor–the refined nobility postured like likenesses before exquisite Mediaeval tapestries and hangings.

Act Four spans from the tremendously quiet night-before-battle scenes to the battle itself: both climaxes of varying kind.  The text is uppermost as Chorus’ voice introduces the nocturnal English camp and Olivier gives Henry’s deep meditation as unspoken thought.  Then, at morning, the Saint Crispian speech is delivered full blast but with the camera moving back as the rhetoric grows in fervour (a stunningly sensible device, used also in Hamlet  and Richard the Third).  Agincourt is an exciting set-piece, planned “after” Eisenstein and the cumulatively eventful battle on the ice in Alexander Nevsky.  Beneath the excitement, if we can feel it, is a sense of the dreadful anticipation in warfare, as well as the pitiful carnage to which it leads.  This is the crux, not just the pay-off, of the production.

The pace is relaxed after the victory and down to the first scene of Act Five, beautifully set in the snow of a small French village.  Pistol’s “come-uppance” at Fluellen’s hands is played against an almost Arcadian background, where the remaining English soldiers go to church with the French peasant women.  The romantic and political diplomacy at court conclude the action.  Henry charmingly woos Katharine and general amity is announced after the Duke of Burgundy’s eloquent plea for peace beginning,

“My duty to you both, on equal love,
Great Kings of France and England!”

which is spoken to a lovely “countermelody” by the camera exploring the painted country landscape.  At last, we briefly wing back to the Globe.  Katharine becomes, naturally, a boy actor–Chorus shakes hands with the watching gentry–a scroll of paper descending from the sky is seen to bear the credits of this vast, impeccable entertainment.

NOTE:  It will probably be necessary for us to project a print made up in the Superscope ratio.  In 1958 the film was reissued in that format.  The damage caused to original visuals is annoying (and annoyingly pointless) but fortunately such damage is not great.