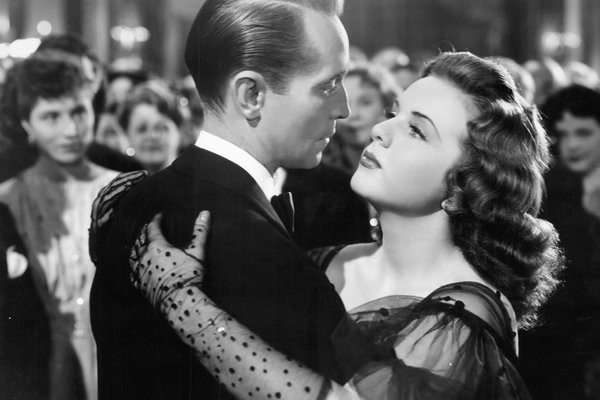 Toronto Film Society presented His Butler’s Sister (1943) on Monday, November 29, 1976 in a double bill with the short Every Sunday and Three Smart Girls as part of the Season 29 Monday Evening Film Buff Series, Programme 3.

Songs: “Nessun Dorma” from Turandot: music by Giacomo Puccini, words by Sam Lerner.  “When You’re Away“: music by Victor Herbert, lyrics by Henry M. Blossom.  “In The Spirit of the Moment“: by Bernie Grossman & Walter Jurman.  “Russian Medley“: arranged by Max Rabinowitsh.

Nominated for an Academy Award for Sound Recording.

Georges Sadoul, in Dictionary of Film Makers (translated by Peter Morris) wrote of Borzage: “No director has shown better than he the intimate warmth of human love in a profoundly united couple.  His lovers are rarely isolated from their environment but are carefully depicted as part of their times, most commonly crisis-ridden America.  In addition to his understanding of human relationships and his poetic tenderness, he had a social awareness and many of his films express a hatred of war.  When war ravaged the world for the second time in his life he resigned himself to directing merely competent commercial films.”

Yet, even these “commercial” films of the 40’s and 50’s (such as Till We Meet Again [1944], I’ve Always Loved You [1946] and The Magnificent Doll [1946]) all exhibited varying quantities of Borzage’s peculiar brand of lyrical romanticism.  His Butler’s Sister is generally conceded to be part of Borzage’s artistic decline, and while there is no doubt it doesn’t come close to his 30’s masterpieces, it is still unmistakably a Borzage work.  Mobile camerawork was a major featureof Borzage’s films, beginning in the late twenties (likely influenced by F.W. Murnau’s arrival at Borzage’s studio, Fox, around that time).  Robert E. Smith comments in “Bright Lights”: “Even in minor films like His Butler’s Sister, sequences of beauty and power abound.  The crane that descends on a beautifully lit Deanna Durbin and Franchot Tone as they walk home late at night isolates them as emotionally special individuals at the start of a magical relationship.  Durbin’s purity and spiritual potential had already been demonstrated to us in the sequence immediately preceding this one.  The Russian song she sings, full of dramatically illuminating closeups, focuses attention on the very special emotional qualities of the protagonists.”

In his best films, the camera was an active participant, often leading the protagonists to moral conclusions–note the end of His Butler’s Sister, as Durbin  rushes to Franchot Tone through a crowd after finishing her song.  Compare this with the start of the picture–when we first meet her, the camera follows her as she walks between cars in a moving train.  There is another inventive piece of camerawork on the opening train sequence.  Durbin has decided to come to New York to pursue a singing career, and upon learning that a famous composer (Tone) is on the train, Durbin goes to his train compartment to audition.  While she is singing for the wrong man the train has stopped and Tone has gotten out onto the platform.  Borzage gracefully moves the camera in the compartment while Durbin is singing and at the same time the train begins to advance in the opposite direction.  The figure of Tone, oblivious to being pursued, proceeds into the image framed by the moving train’s window as Durbin continues signing, then is passed.  All of the film’s themes and relationships are concisely compacted into this remarkable sequence.