Toronto Film Society presented His Girl Friday (1940) on Monday, July 22, 1968 in a double bill with Scarface as part of the Season 20 Summer Series, Programme 2. 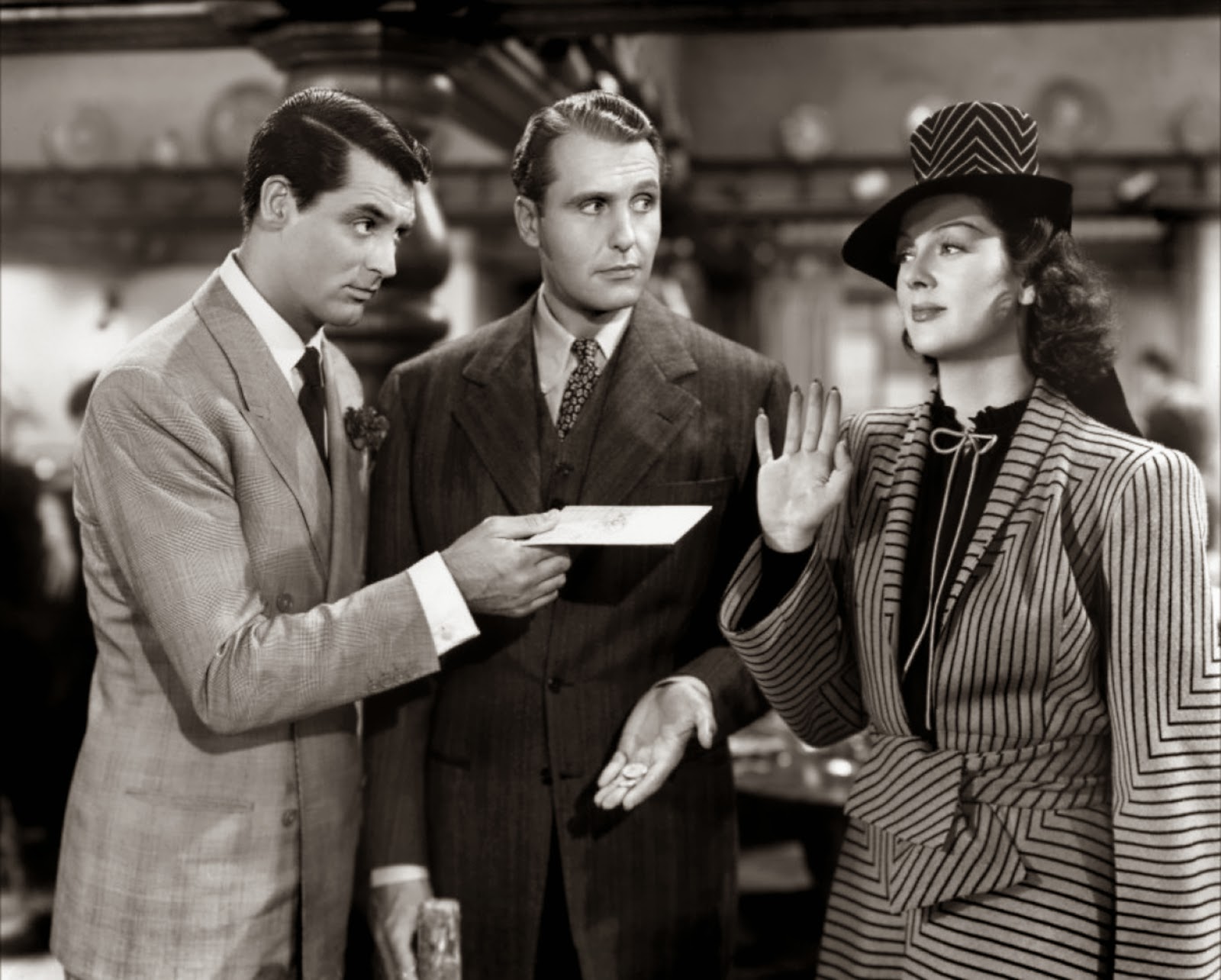 Just as the old-style romantic war lay received its death-blow with the opening on Broadway in the Twenties of the blunt-spoken and down-to-earth “What Price Glory?”, so the traditional romantic treatment of newspaper editors and reporters never recovered from the arrival on the scene of “The Front Page”, with its outrageous newsroomful of tough-talking, cynical and ruthless scribes vying with each other to make the greatest possible capital out of the escape from custody of a disturbed unfortunate who has unwittingly done murder.  “The Front Page”, however, while violently anti-romantic, could hardly be said to be “realistic”–its wild, fast-talking farce against a background of melodrama was, in its way, almost as fanciful as the sort of polite fiction it was replacing.  Be that as it may, it was a rousing hit and in 1931 Lewis Milestone filmed it with considerable success, though of course some of the pungent language had to be toned down for the screen.  In that version, Pat O’Brien played the Hildy Johnson role created by Lee Tracy on stage; Adolphe Menjou was the cynical editor, and Mary Brian the sweet and somewhat stupid girl striving to win Hildy away from the wicked newspaper game.  Mae Clarke played the “heart-of-gold” prostitute who befriends the fugitive–the play’s one concession to sentiment.

In 1940 Howard Hawks remade The Front Page as His Girl Friday (one of the very few really good remakes of a hit film)–and, as indicated by the fact that Rosalind Russell now plays Hildy Johnson, certain sex-changes have taken place–and they work beautifully.  Hildy is now a hard-boiled, wisecracking lady reporter, newly smitten with love and desiring escape from her sordid milieu; Cary Grant the ruthlessly scheming editor determined to keep her on the job.  I have often wondered how Ralph Bellamy felt when offered the Mary Brian role.  Anyway he’s better than she was, and much funnier.

Hawks, who had already filmed a Hecht-MacArthur show with hilarious results in Twentieth Century (shown by TFS two summers ago), does it again in spades.  His Girl Friday is wonderfully brash, tough and uproariously funny–both its dialogue and action whiz along at a breakneck pace that may startle many who are accustomed to the often more leisurely conversation and situations in today’s US comedies.  Grant and Russell are at the top of their comic form, quite plainly making an enthusiastic meal of their juicy assignments.  The supporting cast is crammed with the sort of reliable and expert character-players one expected in Hollywood movies of that day; it would be hard indeed to round up a comparable crew in 1968.

Perhaps one should conclude with a special word for Charles Lederer, whose screenplay is so skilful and so right that it’s sometimes difficult, even for one familiar with the original, to remember now which lines are his and which quotations or adaptations are Hecht and MacArthur’s.

Correction to July 15 notes: In Only Angels Have Wings the role of Sparks was played by Victor Kilian (not Joseph).