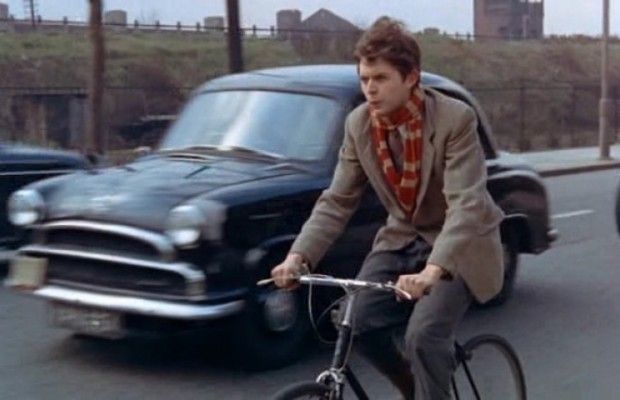 Toronto Film Society presented The Horse’s Mouth on Sunday, November 2, 1980 in a double bill with Tunes of Glory as part of the Season 33 Sunday Afternoon Film Buff Series, Programme 3.

With The Horse’s Mouth, one more superb portrait has been added to the Guinness gallery.  Stanley Kauffmann in his book, A World On Film, neatly sums up the actor’s art.  “Jimson is a superb creation, a wonderfully cranky, disillusioned enthusiast who knows that the battle lines are drawn forever, that the artist is always on the ostensibly losing side but only ostensibly, and who wouldn’t change sides for anything.  With a hitchy, little jerky stride, a shrewd measuring eye, and a gravelly gin-soaked voice, Jimson enters full-blown–through a prison gate, incidentally.  Guinness doesn’t proceed to create him for us; as with the best acting, Jimson is, from the moment he appears.  We know immediately that he is a human being with a history, who was miseducated and re-educated, who aspires, gets knocked, and reaspires, whose soul soars and whose clothes probably stink.  He has existed, for sixty years or so; his entrance is merely the point at which we pick him up.

“By now, of course, Guinness has something extra assisting him when he steps before us; in addition to his present work, we are aware–consciously or otherwise–of the difference between his newest part and his past creations.  Not many contemporary actors, even good ones, are capable of or are allowed to demonstrate comparable versatility.  Himson is enhanced by our remembrance of the Colonel in The Bridge on the River Kwai, Fagin, The Lavender Hill Mob, the entire family Guinness played in Kind Hearts and Coronets.  Against that background we admire him additionally.”

The substance of this film is the artist’s quest, in this case an insanely funny Odyssey only one step ahead of the police.  Searching always for a canvas large enough to receive his masterpiece, Jimson finds a superb blank wall in the apartment of a potential customer–a tapestry having been sent out to be dry-cleaned.  During the owner’s absence on vacation, Jimson gains entrance and turns the flat into a studio.  He strips the flat of its valuables, pawning them in order to finance his painting, and keeps meticulous note of the revenue, considering it an advance against the completed, but unsolicited work.  He imports a pirate’s gang of models whose feet provide the subjects for his mural on the raising of Lazarus.

Almost total ruin is achieved when a sculptor moves in with a huge block of stone.  (One of the most hilarious moments comes when Jimson’s reluctant clients return to their flat and find the monstrous fresco on their living room wall, that their private Michelangelo has painted.  They are so stunned that they promptly fall through a hole in the floor over which Jimson, far too respectfully, had placed their best Persian carpet).

Although the whole depends on Guinness’ contribution, the acting throughout the film is excellent.  Kay Walsh as Coker, attached to Jimson almost against her will, gives a beautifully observed performance.  The characterizations of Nosey and Sara Jimson are fully realized by Mike Morgan and Renee Houston respectively.  “Dreamer and menace, genius and buffoon, Guinness’ Gulley Jimson is a fine realization of absurdities as well as the idealisms of the creative life.  In the final shots, he goes sailing down the Thames in his

rickety and quite unseaworthy houseboat, and passes painters of another kind freshening up the hull of a great ship.  Then, in an appropriately overstated fadeout (the traditional one made “mythic”), Gulley Jimson passes through the open arms of the Tower Bridge.  It is absurd, but it is also grand.”  (Film Quarterly Spring 1959).