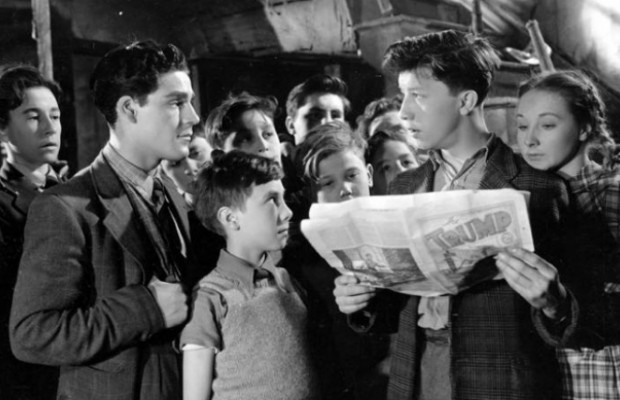 Boundary Lines was photographed in Kodachrome and the print we are using is a Kodachrome duplicate. Steel was photographed in 55 mm (three strip Technicolor). The print we are seeing is a genuine l6 mm Technicolor print with three superimposed dye images, similar to colour retragravure in process, while the sound track is conventional black and white. It such be interesting to members to take note of the rather different effects due to “the colour balances” of the two films. It should be borne in mind that the sound track of Boundary Lines is in colour and hence renders the sound rather differently to that of the silver image track of the Steel film.

We are pleased to announce that the British film, Hue and Cry, voted the most popular film shown during our 1948-49 season will at last be shown commercially in Toronto.

This experiment in British film-making will run at the Odeon Christie Theatre (St. Clair and Christie) August 25, 26 and 27.

Because the film begs to differ, there was hesitation on the part of theatre managers to book it.  Our members’ evaluations of Hue and Cry commended its refreshing approach and originality and emphaiszed that it should have wide appeal to all types and ages of audiences.

We are vitally interested in seeing such experiments in film-making supported and think that our members will want to recommend Hue and Cry to their friends, or see it again themselves.

Members will recall that Hue and Cry is a fantasy about children.  It involves hundreds of London’s school children, a group of black market villains and a writer (Alastair Sim) of penny-dreadfuls, set against the natural background of London’s ruined buildings.