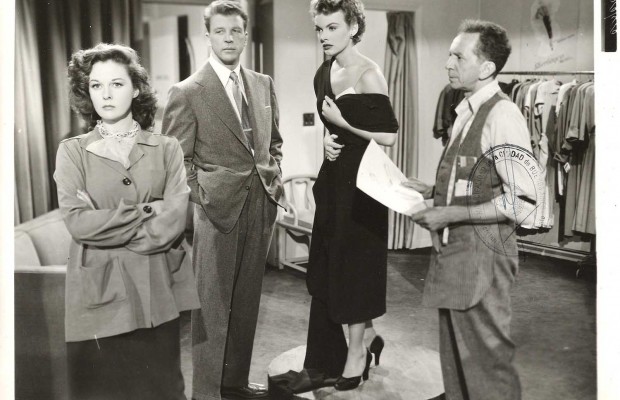 Toronto Film Society presented I Can Get It For You Wholesale (1951) on Monday, August 24, 2015 in a double bill with My Sister Eileen as part of the Season 68 Monday Summer Series, Programme 7.

Fox filmed most of the exteriors right in the garment center of New York’s Seventh Avenue to catch the real local flavor.  Director Gordon even filmed some scenes with Hayward and Dailey amidst unsuspecting garment workers going about their daily business (how Hayward could go unnoticed is a mystery.)  It was a different story when they filmed at Bonwit Teller, where the onlooking crowds tied up traffic for hours.

Hayward is perfectly cast, projecting all of Harriet’s acidity and idstrust, she’s all business and tougher than the average Seventh Avenue shark.  She also has a chance to match her wit with that of the mast of sarcasm: George Sanders.  And the ads didn’t let Hayward down this time: “The spectacular rise of a woman in a man’s world”; “She made good–with a plunging neckline and the morals of a tiger”; “Never promise what you can’t deliver.”

The title was changed to Only the Best for TV showings, to differentiate it from the 1962 Broadway production, which starred Lillian Roth, Elliott Gould (portraying the character that Susan played in the movie, which was a man in the novel), and Barbra Streisand, who became a Broadway star as a result of this show.

I Can Get It For You Wholesale is about as accurate an image as one can get of the “rag trade” circa 1951.  These days, may of the larger firms have been acquired by conglomerates, but there are still enough small manufacturers around who would identify with the problems faced by the characters in this film.