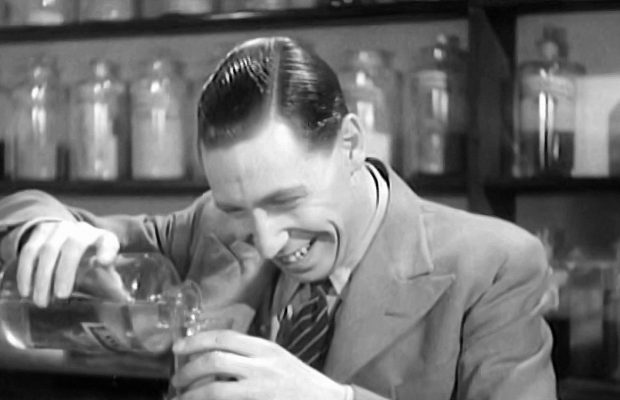 Toronto Film Society presented I See Ice! (1938) on Monday, January 25, 1988 in a double bill with Queen of Hearts as part of the Season 40 Monday Evening Film Buffs Series “B”, Programme 4. 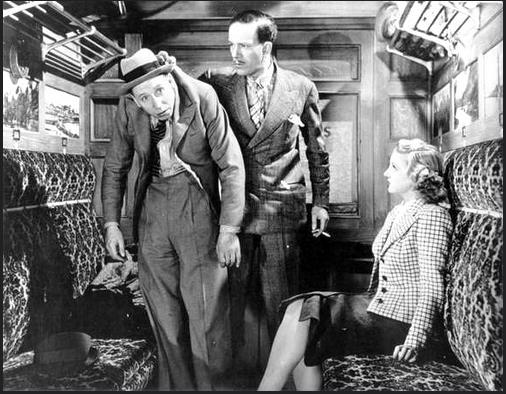 If Gracie Fields was the “Lancashire Lass”, then the title of “Lancashire Lad” fell to George Formby, the toothy, ukelele-strumming songman, comedian, and motion picture star of the same period. In [today’s]…film, George Bright (Formby), whose lifestyle bears no resemblance to his surname, is the accident-prone assistant to a provincial photographer. He has invented a miniature camera and becomes a prop-man to a skater (Walsh) and her sinister partner (Ritchard). George falls for the skater, eventually finds himself in prison, and through an incredible series of circumstances, ends up as a referee in a hockey game from which the press has been barred. The pictures he manages to snap with his tiny camera land him a job on Fleet Street. The picture was given the top rating by David Quinland in his British Sound Films publication, and, although somewhat grudgingly, was rated as one of the better Formby films by Variety.

The Canadian hockey team facing the British “Cyclones” in the film was, for the most part, made up of Canadians. They were Canadian servicemen who were training in Britain (and playing hockey) at the time. The goaltender with the pencil moustache (and one line of dialogue) is Art Child, who was a goaltender with the fabled Hamilton Tigers Senior Hockey Club of the time, a club which became known as “The Tattered Tigers”. Child went on to a successful political career as an MLA from Hamilton, and became a provincial cabinet minister. I did a little research and dug up some information about some of the other hockey players who appeared in the film. A few were from the Wembley British team. Other Canadians included: Ottawa-born Bobby Giddens, who was founder of the weekly Ice Hockey World magazine; Jake Milford, who is a member of the Hockey Hall of Fame; and Arnie Pratt, who was the brother of Canadian hockey legend Babe Pratt. Incidentally, the pay for these players in the film was 4 pounds a night; not bad when the weekly average wage at that time was only 5 pounds. There is also a quick appearance in the film by Roddy McDowell, then just ten years old, and still three or four years away from his acclaimed American appearances in How Green Was My Valley and Lassie Come Home. McDowell had been evacuated to the United States during the Blitz in 1940 and picked up his movie career there.

George Formby was born in 1904 in Wigan, and had a lengthy career as a music hall entertainer, gaining fame through radio performances. His father, George Senior, was a much-loved music hall performer known as “The Wigan Nightingale”. Formby, like Gracie Fields, never forgot his early days, and many of his best-loved songs are Lancashire-oriented. The character of Formby was almost always shy, gauche, and accident-prone. He recorded 189 songs, most with lyrics which were suggestive (for the day). But it was an innocent sexuality which Formby passed on. His first actual film appearance was at the age of 11 in a silent film. His first films as an adult came in 1934 and 1935, respectively: Boots! Boots! and Off the Dole. They were little more than a transfer of music hall routines to the screen. Although cheaply made, these films brought Formby to the attention of Basil Dean, the production chief at Ealing Studios. The first of Formby’s 11 films at Ealing was No Limit (1935), an immediate success. By 1937, Goerge was second to Gracie as a box-office attraction—and by 1938-1943, he was the first.

When the war came, Formby toured tirelessly in shows for the troops and was awarded the Order of the British Empire (OBE) in 1946. Fields, however, chose to tour in Canada, partially in order to help her husband leave Britain and obtain American citizenship. For this she was chastised by the British press, even though she raised funds for the Navy League. Returning to Britain in 1941, Gracie managed to re-establish herself, but was never again to become the national symbol she had been in the 1930s. Kay Walsh had an active stage career before turning to films. In addition to I See Ice!, she was the romantic interest in Keep Fit (again with Formby in 1938). Director Anthony Kimmins (1901-1963) began as an actor and writing comedy scripts. In 1937 he became a director, often producing and writing the screenplays for his own films. In addition to his Formby films, Kimmins was also responsible for Mine Own Executioner (1947), Bonnie Prince Charlie (1948), Mr. Denning Drives North (1951), and The Captain’s Paradise (1953). 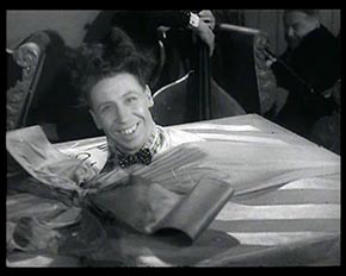 I See Ice! was filmed as a response to the British craze for ice skating in the 1930s. So who better to showcase feats of frozen derring-do than Canucks? The stand-out Canadian in the movie is Eric Waite, born March 18, 1915 in Calgary, Alberta. Waite, aka “the Clown Prince of the Ice”, had a 20-year career with the Ice-Capades, specializing in goofy trick skating—making him the perfect (uncredited) rink double for George Formby.