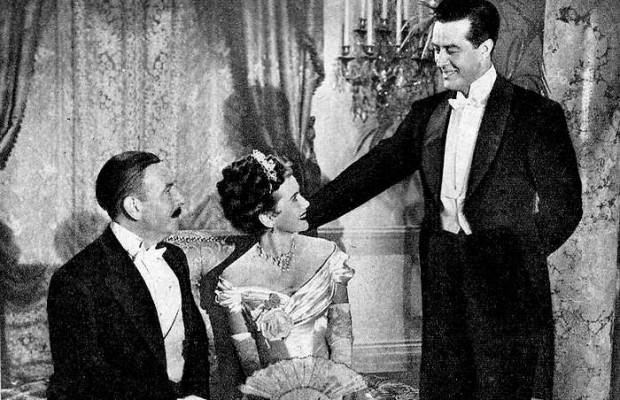 Toronto Film Society presented The Imperfect Lady (1947) on Monday, January 5, 1981 in a double bill with The Stranger as part of the Season 33 Monday Evening Film Buff Series, Programme 5.

Our second film gives us a chance to view Teresa Wright, one of the most talented and distinctive actresses of the 1940s, in what is, for her, a definitely offbeat role.  Until this time, Miss Wright had generally played clean-cut, wholesome characters in films such as Mrs. Miniver and The Best Years of Our Lives.  She must have viewed the part of an English music-hall girl as both an interesting challenge and a change of pace.

Teresa Wright possessed a very distinctive and effective voice: usually low pitched, but very clear, conveying strength and integrity when the scene demanded it, war and sincere in romantic scenes, and, always, intelligence and conviction.  Although a very pretty woman, she despised Hollywood’s obsession with glamour, and from the outset was determined to succeed or fail on the basis of her acting ability.  Nevertheless, Teresa Wright’s face, with her lively eyes and direct, almost searching gaze, always stood out in a crowd, particularly among the talentless glamour queens around her.

She is the “imperfect lady” of the title, which was probably intended more to titillate audiences of 1947 than as an accurate description of the character. Set in Victorian England, it is the story of a woman torn by her conscience, and the fear of losing her husband.

Among the cast of resident Hollywood Britishers, headed by Ray Milland, Mexican-born Anthony Quinn is an oddity as a Spanish pianist accused of murder.  Sir Cedric Hardwicke, always a fine, low-key actor is his usual interesting and effective self as Milland’s brother.

As an aspiring MP in love with dancer Teresa Wright, over the objections of his class-conscious brother, Milland had just the sort of rakish, devil-may-care manner to make the character believable.

Among the interesting character actors to watch for are George Zucco (Mr. Mallam); Zucco had achieved immortality as Professor Moriarty in 1939’s The Adventures of Sherlock Holmes.  Also on hand is Welsh actor Rhys Williams (Inspector Carston), who had played a leading role in The Corn is Green two years earlier.