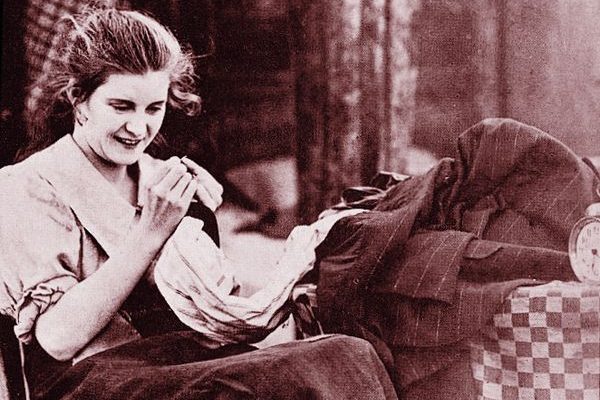 LOBBY FILM from 7.45 to 8.10 p.m. The History of the Silent Film in America, a filmstrip by Roger Manvell

No one has had a greater influence on film technique than D.W. Griffith, according to film historians.  The cinema before 1907 had not advanced beyond the primitive one-reel photoplay which consisted of entire sequences recorded by a static camera set up in one position.  From 1908-1915 Griffith made on the average of two one-reelers a week.  Experimenting and advancing during this period, he learned to manipulate the camera, to break up the single scene into separate shots with a varied set-up for each shot, to concentrate on detail by means of the close-up, to relate one scene with another by cross-cutting, to control the tempo by cutting each shot to the right length.  In this way he discovered the principles of present-day film editing.

Griffith exploited this new technique in his two great films, Birth of a Nation (1915) and Intolerance (1916).

“The whole of Intolerance is one massive piece of relational editing in which four themes are elaborately intercut to make a passionate onslaught on intolerance throughout the ages.”  Woven into the modern story of today’s slums, are three parallel ones of other times–16th century France, ancient Babylon and Calvary itself.  The present was merged with the past to form an epic sermon, an attack on injustice and cruelty.

Griffith hired hundreds of players, ordered tremendous sets, shot miles of film.  His Babylon, occupying 254 Hollywood acres supported whole armies on its walls.  Two years were spent in making the $1,900,000 film.  “Against all probabilities, out of all the welter, passion, extravagance, footage, there issued finally a work of unmistakable greatness and originality.”

Of interest to students of the film may be the detailed analysis of the famous last section of the film, the Babylonian sequence, in Roger Manvell’s book, Experiment in the Film page 33.

The following film notes on Intolerance are reproduced from the Museum of Modern Art’s Film Bulletin and were written by Iris Barry. 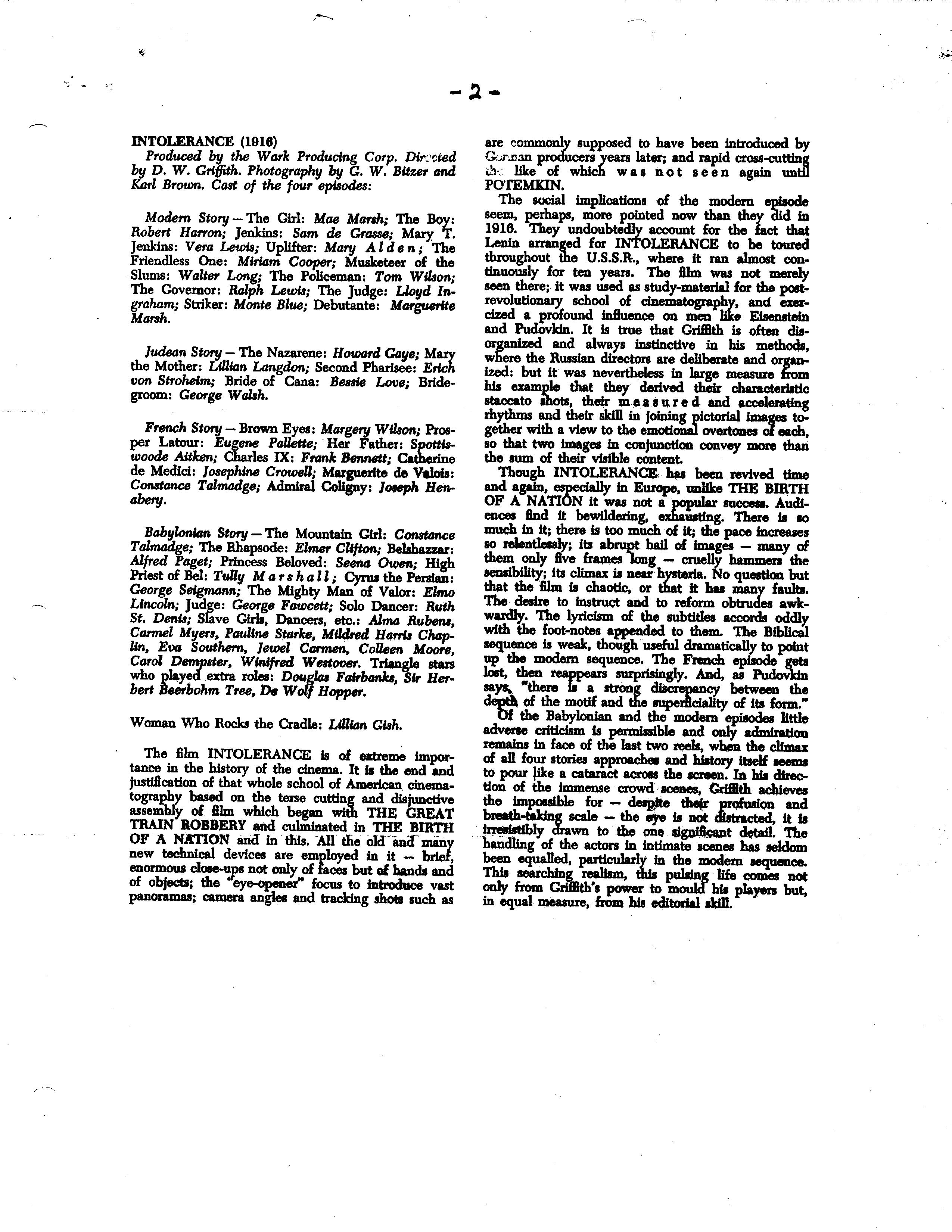 These evaluations conflicted strongly in their remarks.  While there was praise for the characterizations and acting and what was described as the “nostalgic atmosphere” of the film, there was on the other hand violent opposition to this point of view.  One challenging evaluation described the characters as “one dimensional, the acting and staging as too shallow for any emotion to come through, the atmosphere sticky, sickening, lacking in vitality, the content too lacking in substance to stimulate the mind and emotions; the film too out-dated and dull to be considered a classic.”

To another member, this film was “an example of deft story telling, although it seemed a bit too impressed with its own cleverness.”  Another felt it to be “an example of Duvivier’s uneven direction, too dependent on the dialogue to be considered even good as a film, but a curiosity,” while yet another member felt the film was “neither old enough to be a curiosity, nor new enough not to seem passé.”

The large number of evaluations received were practically unanimous in their enthusiasm for this film.  Its direct contrast to Carnet de Bal cased the comment that “it made that film seem more unimportant than I had first considered!”

Fabrebique was judged by the members of this Branch to be “one of the classics of film history–human life portrayed with rare art, simplicity and integrity–Director Rouquier’s sensitive approach, combined with technical skill to match it, resulted in what was a wholly satisfying experience.” Particular note was made of the elements of restraint, realism, dignity and poetry in the film, of the expressive camera-work, the wealth of detail and observation, the minimum of dialogue and the use of natural sounds and unobtrusive musical score.

Two quotes from members: “I have never seen, and never hope to see anything finer on the screen.”  “Should be on anyone’s list of ten great films.  The general effect was sincere and moving.”

The only adverse critical remarks were that it might be a trifle overlong, and that a few of the changes in continuity were not smooth, hence the even flow was disturbed at times.

As an experimental effort this film was felt by some members to be “stimulating”, “fascinating”, “arresting”, and “worth seeing”.  A few felt it interesting to compare with recent avant garde films (Maya Deren, Richter etc.)  Others commended its feeling of suspense and dread, its original effects and musical score.  Criticisms from those who lied the film were as follows: – “Unsuccessful as film – it is a collection of symbols – never unified, always puzzling – a good editor could do a lot with it”.  Flippancy and eagerness to shock on the part of the makers of the film were noted as well as their preciousness.  One thought the film ludicrous for the most part, but was glad to see it, if only to debunk it.

Of those who evaluated the film as “very bad,” two made comments as follows: “One felt it had nothing to say in its subjective approach”.  The other member was deeply resentful that the film had been exhibited and to him, “the film was ridiculous, phoney, utter pretence and an insult to creative artists”.

The one evaluator who did not classify the film commented that “in spite of the fact that this film represents only a minor art movement fashionable in the thirties, and that it caters to the psychologically perverted and has a sort of intellectual snob-appeal, it is still desirable to see, as it represents a certain phase of art expression”.

ANNOUNCEMENT:  When this Branch was first formed, the pleasure of planning its activities as in the hands of only the ten Directors of the Executive.  This year a House Committee has been formed from the membership at large.  It is felt that there are still more members who would enjoy contributing their ideas and working with others on this House Committee or on two further committees to be formed to look after mailing and educational projects.  Would interested people please phone Dorothy BURRITT LL 7562.  The greater participation on the part of members, the healthier the Society.