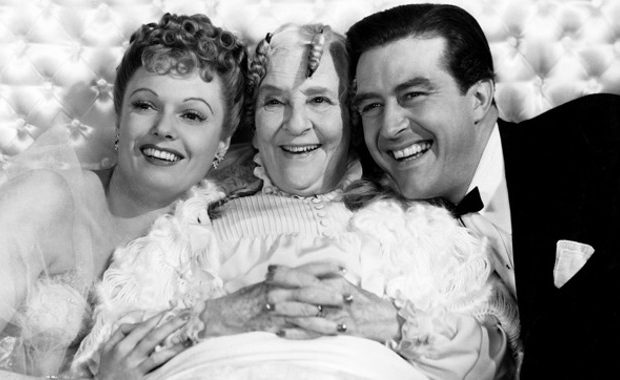 Toronto Film Society presented Irene (1940) on Sunday, September 24, 2017 in a double bill with Fashions of 1934 as part of the Season 70 Sunday Afternoon Film Buff Series, Programme 1.

Although Ray Milland doesn’t mention anything about today’s film Irene in his autobiography Wide-Eyed in Babylon, it sounds like the making of this picture was a turning point for his career based on what he omits and what Anna Neagle wrote in her autobiography There’s Always Tomorrow.

Milland made the prestige film Beau Geste with Gary Cooper just the year prior to Irene, while Anna writes that like Lucille Ball, Ray Milland was having difficulty in getting off the ground.  He was under contract to the rival studio, Paramount, but they were content to let RKO have him—although with a warning: ‘We shan’t be taking up the option.’

She said that Milland was absolutely right for the film, and made a huge success in it.  When it was over Herbert Wilcox, the director and Neagle’s husband, told him the story of how they managed to get him.  Unfortunately, though, she doesn’t go on to tell her readers so I can’t tell you.

“’Right,’ Ray said.  ‘I’ve never been allowed to drive my car through the front gates of the studio.  Next time the doorman tries to stop me, I’m going right on in.’  He did.  What’s more, he parked outside of the Chairman’s office!  When Herbert tried to get him for our next production he wasn’t available, he was co-starring with Claudette Colbert!  I last saw Ray during my Broadway run of Charlie Girl.  ‘Don’t let her know who’s here,’ he told the Stage door keeper.  ‘Just say, “A friend would like to see her.”’  What a glorious surprise—I adore Ray!”

Anna Neagle also reminisces about the actress May Robson who plays Granny O’Dare in tonight’s film.  Although it appears to me that she has gotten May Robson’s age and the order of when the films Irene and Playmates were made mixed up, Neagle writes that May “was 77 years old and in her previous film with John Barrymore he had to dump her into a swimming pool and sit on her until she was submerged.”  Playmates was made in 1941, which was Robson’s second last film and Barrymore’s last and if that is the case, it would have made Robson 83.  Anyway, she goes on to say: “Jack thought it great fun—so did ‘Muzzie’ May.  But after a number of takes the doctor said she had had enough.  At 77—or 83—more than enough I should say.  After our film she was offered a seven-year contract by Jack Warner.  ‘Seven years,’ said ‘Muzzie’ May.  ‘What if I’m not here?’  She wasn’t.  She died shortly afterwards but denied strongly her illness had anything to do with her swimming pool episode with Jack Barrymore.  Although by the calendar she was 77, ‘Muzzie’ May was all of twenty in real life; never missed a party and always giving them.  I talked to her about the obsession the press seemed to have for revealing the age of artistes, but it was not only the press, she said, telling me in her own imitable way of a personal appearance she was making a year before.  As she came out of the stage door a crowd was waiting for autographs.  She noticed a very, very old lady, really very old, waiting.  ‘Muzzie’ May was quite concerned and went over to her.  ‘I am sorry to have kept you waiting.  They should have brought you in to see me.”  That’s all right—my dear’—the old lady muttered.  ‘I just wanted to touch you’ (which she did).  ‘You see, my mother took me to see you when I was a little girl!’”

Sourced from There’s Always Tomorrow: An Autobiography by Anna Neagle (1974)

Plot:
A rags to riches, Cinderella-inspired dish with a mistaken identity element on the side. Two wealthy socialites lavish a New York shopgirl of humble Irish background in riches and glamour as they compete for her attention and affection.

History:
This production, released in 1940, is but one of many incarnations of the story. Originally written as a play entitled Irene O’Dare by James Montgomery, the musical-comedy in two acts, seven scenes, with music by Harry Tierney, premiered at Broadway’s Vanderbilt Theatre (since 1954, a six-storey parking garage) on November 18, 1919. Irene smashed attendance records for the time with 675 total performances. (The current record holder is The Phantom of the Opera, with 12,326 performances as of September 10, 2017.)

The first cinematic version came in 1926, with Colleen Moore as the titular Irene and Lloyd Hughes as her love interest, Don Marshall. Though obviously a silent film, the 1926 version shares with the 1940 version all black and white photography, save for one Technicolor sequence. (Look out for Billie Burke, who plays Mrs. Vincent in Irene, as well as a certain Good Witch in a somewhat famous 1939 film that also mixes black and white and Technicolor photography.) In 1936, Jeanette MacDonald starred in a Lux Radio Theater version of the play, so when this 1940 film version appeared, Bosley Crowther’s review in The New York Times was already referring to the story as “the screen version of that old musical show”.

Anna Neagle (Dame Anna Neagle, as of 1969) and director-producer Herbert Sydney Wilcox were one of the most prolifically collaborative duos in British cinematic history. Though not married until 1943, Wilcox discovered Neagle, who had been dancing professionally since the age of 14, in a musical in London’s West End. The pair would first collaborate on Magic Night (1932; originally titled Goodnight, Vienna), and aside from a TV movie The Glorious Days (1953) and No Time for Tears (1957), Wilcox directed every single film in which Neagle appeared. Either the public grew weary of the Neagle-Wilcox combo or, as is usually contended, Wilcox, whose talents as a producer always outshone his talents a director, finally lost his touch. Either way, a series of poor investments led him to bankruptcy by 1964, which ended his career permanently.

Anthony Collins received an Academy Award nomination for Irene in the category of Best Music and Original Score. Interestingly, he had also been nominated in the same category a year earlier, for Nurse Edith Cavell, and would be nominated a third consecutive time the year following Irene, for Sunny. All pictures were Neagle-starring and Wilcox-directed.