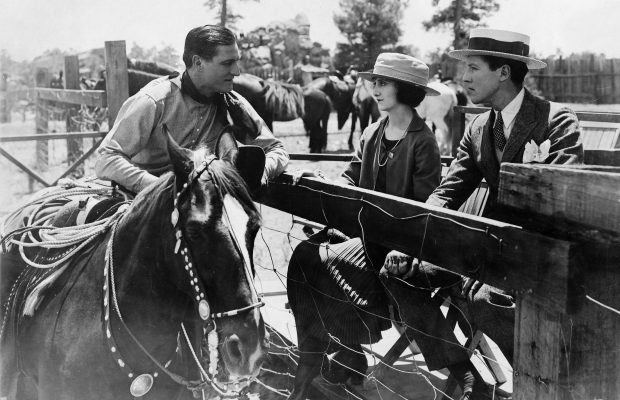 The programme will open with a National Film Board short, Dick Hickey – Blacksmith.  There will be a 10-minute intermission during the feature film.

At the age of 29, after making 48 other films (39 of them Westerns) John Ford made this film about the building of the Union Pacific Railroad.  The Informer, The Long Voyage Home, The Grapes of Wrath and How Green Was My Valley were many years away; but Paul Rotha in The Film Till Now said: “The type of film America can make well if she sets her mind to it–ranked on the same level with the epic quality of The Covered Wagon and combined the best elements of the Western school with the more sophisticated direction of the Hollywood feature film.  Vast in its conception–Ford, despite the hindrances of a story-interest, handled it with a high degree of talent–as a film it was fit to rank with any in the class of reconstructed fact.  I remember with feeling the long line of railwaymen’s camps on the progressing track; the spirit and adventure of the pioneers; the clever rendering of the manoeuvres of the encircling Indians; and above all, the far-stretching landscape across which the steel track was to run.”

W.K. Everson contributes: “Ford had made a name for himself as a shrewd maker of vigorous horse-operas; he’d always gone out of his way to secure first-class locations–his stars were Buck Jones, Harry Carey, Tom Mix and Hoot Gibson.  Well-schooled in the ways of Westerns and loving them, he obviously saw in The Iron Horse an opportunity to make a grand-scale Western rather than an epic and that is precisely what he did.  Despite its tremendous spectacle and inspiring theme of national progress, it seemed little more than a greatly overgrown continuation of his earlier “B” Westerns which had also contained elements of the epic.  It was much faster and more exciting than James Cruze’s The Covered Wagon, yet less memorable as a film.  Ford emulated Cruze by shooting his film almost entirely on location in the Nevada desert.  There is little or no studio work (all the cabin interiors, e.g., are quite authentic, with incessant activity outside the windows) and, apart from one painted backdrop, no faking at all.  Ford employed over 5,000 extras and 100 cooks to feed them.  The unit built two complete towns, used a 56-coach train for transportation.  The cast lists a regiment of U.S. troops and cavalry (Ford managed to borrow a complete regiment from Salt Lake City!), 3,000 railway workmen, 1,000 Chinese laborers, 800 Pawnee, Sioux and Cheyenne Indians, 2,000 horses, 1,300 buffalo, and 10,000 Texas steers!  Ford wanted to get close shots of a buffalo stampede, dug a hole in the ground large enough for himself and his two cameramen.  Prior to having his assistants stampede the beasts right over the hole, he gave one final instruction: ‘If this doesn’t work, just fill in the hole!’  Cruze played down action sequences unless they were an essential part of the plot; but Ford played every action scene for all it was worth, slamming it over with tremendous gusto.  He shot an Indian charge from half-a-dozen  different angles, intercut with other footage–During the early 20’s, a moving camera was regarded with suspicion as an arty European trick; through most of The Iron Horse the camera is immobile, but during the action scenes Ford loaded it on to trucks, to the front of the locomotive, shot from the top of the train, swept along with groups of galloping riders–this fluidity of camerawork, plus the breathtaking editing, built these battle scenes to a pitch of excitement denied those in The Covered Wagon–justifying the term ‘epic’.  Yet the story line is strictly a product of the “B” Western and tended to be give prominence over the important business of railroad building.  Ford seemed to play down the factual aspects–yet went out of his way to obtain authentic props–the original trains are used in the final scenes; Wild Bill Hickock’s vestpocket deringer was used, and the original stagecoach used by Horace Greenley!  The Iron Horse contains some of Ford’s best and most typical work; its weakest sections are its broad slapstick interluces.  Photographically it is quite superb, with many shots now firmly established stanbys of the director.  One sequence is beautifully introduced merely by showing the shadows of Indians suddenly appearing on the brightly sunlit train coaches, while another imaginative sequence smoothly intercuts a wedding and a funeral.  The Iron Horse did not duplicate the critical success of The Covered Wagon (though one critic called it an ‘American Odyssey’) but it was a huge popular success in America, garnering much praise from governmental and educational  bodies.  Inexplicably it failed miserably in Britain.  Perhaps no one would be foolhardy enough to attempt to select the two greatest Westerns of all time–but it’s unlikely that anyone will ever claim the honor of the most important Westerns of all time for any films other than The Covered Wagon and The Iron Horse, which helped to lift the horse opera from the ‘program’ class and pioneered the way for many great Westerns yet to come.”