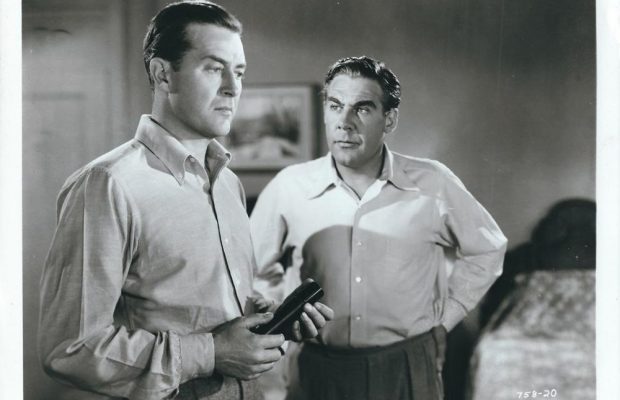 Toronto Film Society presented It Happens Every Spring (1949) on Sunday, April 8, 1990 in a double bill with Angels in the Outfield as part of the Season 42 Sunday Afternoon Film Buffs Series “A”, Programme 8.

This afternoon’s programme is a double-header, and one does not have to be a baseball fan to appreciate these two fine comedies.  It Happens Every Spring is the first feature of this doubleheader.  The film is scripted by Valentine Davies who made his mark as a comedy-fantasy writer with the screenplay for Miracle on 34th Street.  The film stars Ray Milland as a mild-mannered chemistry professor in love with Peters, but he hasn’t popped the question because his meager salary won’t support two.  While developing a bug-repellant for trees, he invents a solution that repels any kind of wood that comes in contact with it.  He’s already a baseball fan of the first order, so he soon concocts a clever scheme to earn additional money. 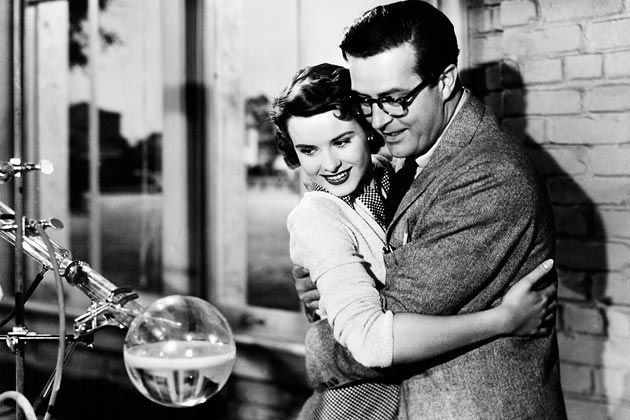 The most uproarious scenes take place on the baseball fields where Milland’s doctored ball sends players and fans into hysterics.  The baseball footage itself is a marvel as director Bacon manages to reproduce an atmosphere that appears completely authentic, although no legit ballplayers appear.

Variety praised the film and the performers: “Producer William Perlberg has mounted the film well, and Joe MacDonald’s camera supervision, especially in the baseball scenes, is a standout.”

“Milland is the prof and does a surprisingly good job in the baseball sequences despite the role being completely different from anything he has essayed heretofore.  Technical aspects of his pitching will pass with even the most rabid ball fans, and he looks equally at home in the classroom or in the clinches with Miss Peters.

Douglas as Milland’s catcher gets free run on his mugging in a role tailored to his talents.  He, too, looks good in the ball scenes.”

Lloyd Bacon, the director of this film, was born in San Jose, California on January 16, 1890.  Before turning his hand to directing, Bacon did some acting and appeared in several of Charlie Chaplin’s comedies–The Bank (1915), The Tramp (1915), The Floorwalker (1916), The Vagabond (1916), Behind the Screen (1916), The Rink (1916) and The Fireman (1916).  Bacon’s most significant contribution to film history probably came during his early days at Warner’s as that studio pioneered new sound technology in the late 1920’s.  Bacon presided over several significant transitional films, none more important than The Singing Fool.  However, Bacon is probably best known for his director’s credit on such classic Warner Brothers films as 42nd Street, Footlight Parade, Knute Rockne-All American, and Action in the North Atlantic.  Bacon’s 42nd Street and Wonder Bar were among the industry’s top-grossing films of the decade.  For a time he was considered Warner’s top musical specialist.  The corporation paid him accordingly, some $200,000 per year; making him one of its highest paid contract directors of the 1930’s.  He later moved over to Twentieth Century-Fox where he worked for Darryl F. Zanuck.  There he directed a series of early Lucille Ball comedies, and helped Howard Hughes create a 3-D Jane Russell spectacle, The French Line.  Lloyd Bacon died in Burbank, CAlifornia on November 15, 1955.  Some other films to his credit include Frisco Kid (1935), Marked Woman (1937), I Wonder Who’s Kissing Her Now (1947), The Fuller Brush Girl (1950) and Call Me Mister (1951).