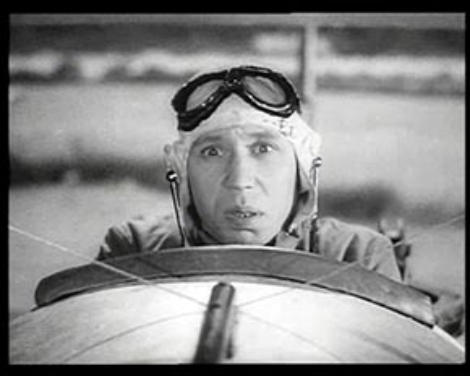 Toronto Film Society presented It’s in the Air (1938) on Monday, November 27, 1989 in a double bill with Everything is Rhythm as part of the Season 42 Monday Evening Film Buffs Series “B”, Programme 4.

For Toronto Film Society members, there may be three things that are inevitable…death, taxes and the yearly appearance on the programme of a George Formby film.  However, the return each year is because of the requests from TFS members, who have enjoyed the memories of the “Lancashire Lad” which we have been able to provide each season.  Although the supply of available Formby films is beginning to run low, the vaults may still yield another one or two in the years to come.

In the world of George Formby films, this is rated as one of the best by the toothy ukulele player who made the phrase “It’s turned out nice again” a household word through the 30’s and into the 40’s.  The formula is much the same as in most other films by Formby.  George Brown (Formby) loves motorcycles, and is also frustrated by the fact that he has flunked out as an Air Riad warden and can’t do his bit for the country, at a time when the war clouds, though black, had not yet opened up over the skies of Britain.

Again, Formby is attempting to “help out” in any way he can, first providing a live, impromptu musical moment for a pilot via the wireless, then donning the Air Force garb of a friend who has hurriedly departed on leave, apparently not delivering a dispatch which Formby finds in the pocket of the uniform tunic.  Dress George up in a uniform, put him on a motorcycle, and send him to an Air Base, and the mayhem begins. 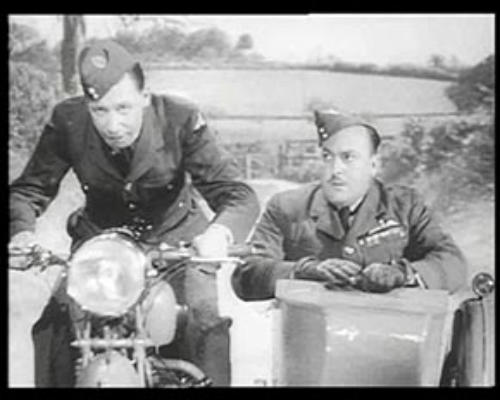 The production values of this film are generally good; there are good shots of Air Force planes in trick flying sequences, and the musical score includes one of the all-time Formby hits “Our Sergeant Major”.

Polly Ward brings the usual pretty face into the film, and the familiar face of Garry Marsh lends much to the humour of the piece with his portrayal of the beleaguered commanding officer, whose life is turned into a nightmare by George every time he turns around.

In the Variety review of the film Formby is described as “a sort of less raucous, timid Joe E. Brown, not quite as bizarre as the Great Square Mouth, but with a distinct horse-faced homeliness of his own, plus a potent comedy knack, a keen sense of pace, and a definite personal appeal.  Formby’s song bits give the film a big boost.

George Formby was a stable boy who had little education, but went on to become an ever greater star than his famous father, George Formby senior, a man who clowned his way into millions of hearts on the vaudeville stage.  He was born in Wigan, Lancashire in 1904 and died in 1960.

His father, known as the “Wigan Nightingale”, did not want his son to follow him on the stage; he said there were too many tears and hardships in the business.  When young George saw his father coming home from the theatre, tired and ill, he knew he was right.  Instead, George went off to the stables.  First, to Bishops Canning as a stableboy, then to Epsom, the Currah and Newmarket as an apprentice jockey.  He raced for several seasons without much success until increasing weight forced him to retired from the racing in 1920, at the ripe old age of 16!

A short time later, Formby senior collapsed and died while playing in Pantomime at Newcastle.  George decided to take a holiday in London to get over the shock, and while there, was having a night out at the Victoria Theatre, when a comedian came on stage using all of his father’s material.  George at first was ready to have it out with the man, but then had a better idea…surely if anyone was entitled to use his father’s material, it was George Formby Junior.

He managed to talk an old friend of the family into giving him a week’s trial at the Hippodrome, Earlstown, followed by a variety tour.  He worked many Northern music halls, and while playing in a minstral show, met his future wife Beryl, who was in a sister act on the same bill.  With her help and encouragement, his rise to fame was rapid.  Playing the gormless Lancashire lad, his character and phrases became known all over the country.

His first films, Boots Boots, and Off The Dole, were made over a garage on Albany Street.  They were so successful that he was signed by Ealing Studios.  By 1938 he was earning over 75,000 pounds a year, and together with “Lancashire Lass”, Gracie Fields, had the corner on the British song and comedy market.

He was turned down by the Army at the outbreak of the war in 1939 and turned down many lucrative offers, including some from Hollywood, in order to entertain the troops.  He and wife Beryl were in the first concert party to land in Normandy, and they later toured many battlefronts in North Africa, India, Burma and Italy.

A weak heart had troubled him since the end of the war.  However, around 1950, he took off on anther world tour which included Canada.  In 1951, he was truck down by coronary thrombosis, but continued to work despite frail health.  By 1959 he was back on stage again.  A year later, his wife died on Christmas Eve.  He tried to carry on in a Pantomime, but his heart gave way again and he had to retire.

Less than two months later, he announced his plans to marry a Preston schoolteacher.  His happiness was shortlived, though, as the excitement proved too much for him.  He had another heart attack and died in March of 1961.  But, through his many recordings, and films, the Formby image lives on!

Polly Ward (Peggy) was born Byno Poluski in 1908, and first appeared on the British stage in the early 1920’s as a singer and dancer.  Her first movie appearance was in 1927’s This Marriage Business.  Other appearances included Feather Your Nest (1937) and St. Martin’s Lane (1938).