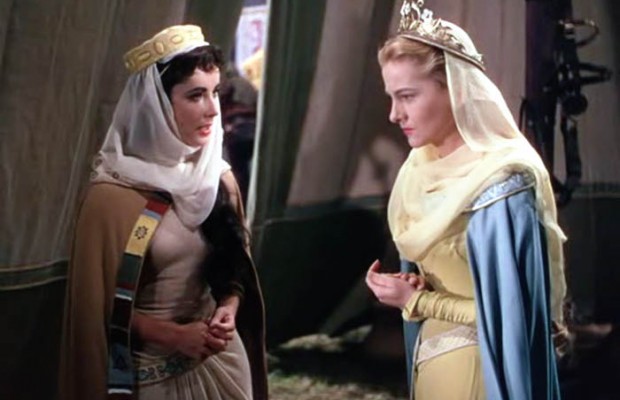 Sir Walter Scott’s famous romance, forced-fed to generation upon generation of schoolchildren almost from its appearance in 1819, was perhaps approaching its extinction in popular

esteem when Metro-Goldwyn-Mayer produced this appropriately epic version of it.  For the novel’s last hurrah, MGM amassed most of its resources–a galaxy of stars, Technicolor, the deployment of extras in great crowd and battle scenes–for a perfect cinematic equivalent of what Scott himself liked to call his “big bow-wow” style.  If only MGM had waited a year or two, they could have had Cinemascope as well.

While Ivanhoe is rarely read any more, we ought to remember its enormous popularity in the nineteenth century, before the real force-feeding began, and its establishment of most of the conventions of romance, the influence of which flowed into Fenimore Cooper, Hawthorne, the Brontes, and most of the Victorian novelists, before running into the trickling tributaries of Harlequin romance in our own day.  Most notably the convention of the faceless hero, torn between the exotic, tainted, dark heroine and the colourless fair one, with his marriage to the second domesticating the romance in final sanity and normality.  What a definitive cinematic equivalent for these stereotypes–for all time!–are Robert Taylor, Elizabeth Taylor (who would play many more dark heroines), and Joan Fontaine (who had already played two very wish-washy blondes for Alfred Hitchcock, in Rebecca and Suspicion).  This triangular love of Ivanhoe for Rebecca and Rowena is set against a background of conflict between Saxon and Norman in twelfth-century England, with the conventional antagonism between Richard the Lion Heart and his dark alter ego-brother Prince

John, and with Robin Hood himself (here called Locksley) a participant as well.  The background highlights the two set-pieces of the novel, and the film: the tournament at Ashby-de-la-Zouche, where Ivanhoe and the King vanquish all comers, and the final siege of the castle of Torquilstone, with its last-minute rescue (where the director must have learned much in his crowd scenes generally).  And then the final duel between Ivanhoe and de Bois Guilbert.  Good versus evil!  Robert Taylor versus George Sanders!

The film was made in England, and one of its strengths is its use of a large supporting cast of skilled British actors: Emlyn Williams, Finlay Currie, Guy Rolfe, Harold Warrender.  And three from Olivier’s Hamlet of four years before–Basil Sydney, Norman Wooland, and Felix Aylmer.

The director of the film, Richard Thorpe (b. 1896), was one of the great workhorses of the American cinema, whose last thirty years as a filmmaker (1935-1965) were spent at MGM.  While Andrew Sarris and company might have some difficulty discerning the marks of the auteur in him, this ex-gagman, extra (with Griffith), prop man, editor, art director, made a large number of slapstick comedies and Westerns in the 1920s, and a number of crime films

in the 1930s (of which the best-known is the original Night Must Fall, with Robert Montgomery).  In the 1940s, he was assigned some of MGM’s “prestige” films: White Cargo, Above Suspicion, The Thin Man Goes Home, A Date with Judy (with Elizabeth Taylor), and one of the last Lassie pictures before she went over to television.  Thorpe had made film adaptations of famous novels before (the best version of Huckleberry Finn, which isn’t saying too much , in 1939), and in the 1950s he made a number of “big” pictures, of which Ivanhoe is clearly one: The Great Caruso, the inferior remake of The Prisoner of Zenda, Knights of the Round Table, The Student Prince, and another adaptation of Scott, Quentin Durward.  The 1950s might well be seen, indeed, as the peak of his career; we might draw the curtain on his work in the ‘670s, which included Follow the Boys and Fun in Acapulco.

Some films based on major novels have simply transferred them more or less intact into another medium (Cukor’s David Copperfield, or Gone With the Wind).  Other films have rethought the original material, and created independent masterpieces (Hitchcock’s Sabotage, or Coppola’s Apocalypse Now).  Thorpe’s Ivanhoe is a sold if minor work in the first category.