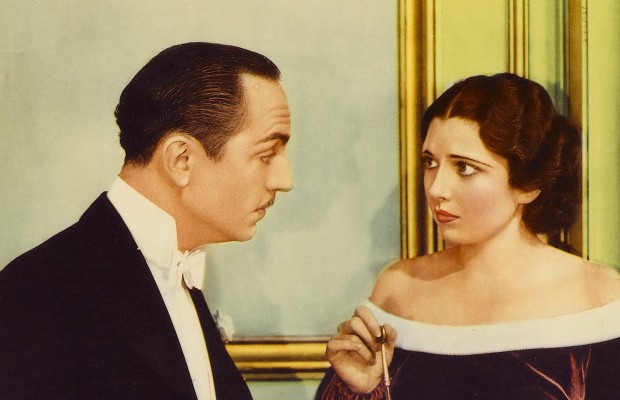 Toronto Film Society presented Jewel Robbery on Saturday, May 11, 2013 as part of Season 66 May Festival: The Pre-Code Weekend.

I first saw this film when it was shown at Cinefest.  We loved it so much that TFS decided to have Bill Everson bring it with him to the next May weekend we had at Kempenfelt to screen it for our members so they could also enjoy this very entertaining film.  Watch out for the funny cigarettes.

In his book on Kay Francis, Scott O’Brien says about Jewel Robbery:  This was Kay’s third release for Warners.  It was the fifth outing for the Kay Francis-William Powell team and was based on a 1925 play by Ladislaus Fodor, and was a fun, racy, satirical romp with a sophisticated edge. The ads promised, “He stole her jewels—but that wasn’t all!”  The Los Angeles Evening Herald Express tattled that “Kay is naughty again.  I mean naughty!  She plays Terri, the vivacious Viennese in Jewel Robbery.  It is quite the naughtiest role she has done in pictures!”  Jewel Robbery was probably the “naughtiest” film anyone associated with it had ever made. Interestingly, Kay was a replacement for Barbara Stanwyck.  And as usual, Kay’s sleek lines and fashion-sense were complimented throughout the film by designer Orry-Kelly.

Jewel Robbery is now a cult favourite amongst pre-Code aficionados.  Harrison Carroll was charmed by the film and reported, “The old cinema favourite, the gentleman thief, is viewed through the eyes of humour in Jewel Robbery…an unmoral tale, but one so completely tongue in cheek and so continental in flavour that who shall condemn it?…Both Kay Francis and William Powell enter thoroughly into the spirit of the occasion and William Dieterle adds the proper touch to the direction.”

‘Jewel Robbery’ as adapted to the American stage from the Hungarian of Fodor was a bit indefinite.  The screen adaptation by Erwin Gelsey and the Hollywood treatment probably account for the picture version being predominantly comedy in a frothy, satirical vein.  The Powell-Francis partnership carries the action over stretches which otherwise would lag and manages to weave in a romantic thread.  Shapes up as fair for deluxe trade but dubious further down the theatre scale.

There are numerous lines of dialog bright enough to insure audience laughter.  There are also conversational exchanges in a boudoir scene near enough to the line to deliver a punch.  The picture is essentially one for fans of some degree of sophistication.  These will enjoy it as something light and different.

As the genteel burglar who entertains customers with his conversation and phonograph while his men clean out a Vienna jewelry establishment, William Powell is ideally cast.  The same may be said for Kay Francis as the beautiful but bored and eccentric wife of an elderly banker who prefers to listen to the invader than be locked with her husband in a vault.

One of the best gags is introduced when the burglar passes around doped cigarets.  This is carried into another sequence when Lenz, a special officer guarding the shop, unwittingly smokes one himself and gives the others to police officials.  Spencer Charters as the smug private cop contributes much to the comic side with his dry humor.

In action the picture is so edited that censors will find it difficult to use the shears.  In fact, there is only one brief kiss in the entire action.

One of the mysteries of the filmic ages (and after all, what other ages really matter?) is why this scintillating comedy is so little known or shown when it should be celebrated as one of the joys of the early 30’s.  Another attendant mystery is how former actor William Dieterle, newly arrived from Germany, managed so quickly to familiarize himself with American mores and Hollywood methods

that within his first couple of years as a director he was able to turn out not only thoroughly American films such as “The Last Flight” but impeccable copies of the work of such longer established directors as Lang, Lubitsch, etc.  Though less ambitious, “Jewel Robbery” is in many ways the equal of the same year’s Lubitsch classic for Paramount, “Trouble in Paradise”—a similar tale with Kay Francis in a similar role.  In all Fairness though, it must be admitted that the key factor in the film’s success is William Powell: even he has never been quite so urbane and polished, before or since, to the extent that for once Kay Francis (his co-star in the same year’s “One Way Passage”_ seems more like a foil than a co-star.  One of the most aggressively pre-Code comedies, its sexual innuendoes are remarkably explicit and by implication marital infidelity is not only to be condoned but even to be encouraged if one’s husband is dull and elderly.  But it is all put over with the most exquisite taste and almost thrown away wit; if all pre-Code comedies had had the sophistication and style of this film, “Trouble in Paradise” and “The Devil to Pay”, there might have been far less trouble with the industry censors around 1933.  Its first five minutes, before either star appears, is a little gem in itself, a perfect opening rather like a short before a related feature; and its fadeout shot is as unexpected as it is effective and felicitous.  And if it’s almost all talk, with the first three reels representing one “act”, what matter?  It’s all so smooth that theatricality never enters into it.  Visually it’s a stunner too, the art direction even borrowing and reusing some pillars from “Noah’s Ark” (!) and the climax offering some highly stylized rooftops sets.

What they have tried to accomplish in transplanting Laszlo Fodor’s Viennese comedy, “Jewel Robbery,” to the cinema pastures is probably more praiseworthy than the way they have accomplished it.  The new resident at the Strand has most of the staples of excellent warm-weather comedy.  The situation is as capricious, the dialogue as sprightly and the settings as sinfully luxurious as they ought to be.  William Powell as the gentlemanly thief can kiss a woman’s hand—while relieving it of a diamond bracelet—or pay a compliment or mock the constabulary as prettily as an amusing scoundrel should in an amusing romantic comedy.  Kay Francis, who can be a good actress, is a definitely bad actress opposite Mr. Powell, and that may be part of the reason why “Jewel Robbery” with its several endowments is only mild.

The robber, who has learned his trade in Paris, is none of your submachine gun dullards.  He loots Hollander’s jewel shop with the delicate touch of a surgeon.  There are four ravishing blondes on as many corners to take care of the police, drugged cigarettes for his victims, and epigrams.  The Baroness Teri, who is as weary of her lovers as of her husband, has a first-hand description of the notorious thief but cannot help the police.

That night, while the city is being scoured for the daring burglar, the baroness finds her boudoir invaded, successively, by a box of flowers, her stolen jewels and the faultlessly attired bandit himself.  The rest is impetuous love and impetuous flight, midnight alarums, more epigrams and a piquant rendezvous in the robber’s apartment.

All this is nervous, brittle comedy of a sort that is sufficiently novel in the films to be stimulating.  Miss Francis interprets the countess as if she were giving an imitation of an imitation, and her performance is one in which her usual intelligence and sincerity are strangely absent.  An excellent subsidiary cast has been assembled, and William Dieterle’s direction has the proper daintiness and wit.