Author Everett Aaker commented in his book George Raft: The Films, that this was the first of six Raft films directed by Edwin L. Marin.  It was also the first and by far the best of four thrillers which Raft shot for RKO Radio, a studio known for film noir. The premise had an eerie, haunting quality which resonated throughout the whole film and the past was almost a character in itself, a ghostly presence from which none of the leading players could escape.  Johnny Angel was one of the most exciting films Raft ever made and he gave one of the best performances of his career.

In Stone Wallace’s book George Raft – The Man Who Would Be Bogart, he writes that, “While Johnny Angel was a good film, it started the trend of Raft appearing only in pictures that featured him as the hero, a concept that soon would become redundant and tiresome for movie patrons.  The movie also marked the first of six films Raft would make with director Edward L. Marin, which ultimately would prove an uninspired creative partnership.”

The title of the book reflects the fact that Humphrey Bogart was cast in films that George Raft turned down.  Although apparently Raft didn’t regret refusing the lead in the films such as 1937s Dead End and 1941s High Sierra, it does seem that he was forever remorseful for turning down the role of Sam Spade in 1941s Maltese Falcon.  First time director John Huston was happy because he really wanted Bogart as his lead.  And this was the film that turned the tide for hardworking Bogart from being a busy actor into a bona fide star and eventual icon.

No matter what films we wish Raft had been in or glad that he hadn’t, we’re sure you’ll enjoy our second Johnny film of the evening, Johnny Angel. 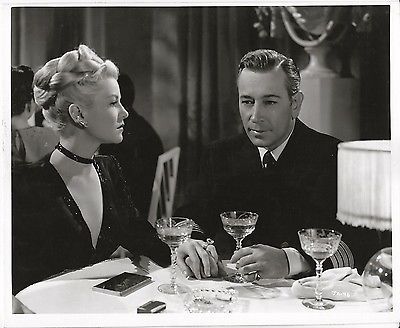 Johnny Angel may not be a classic film, but it certainly has some interesting elements. The foggy wharf scenes; New Orleans streetscapes; and a fine cast of character actors more than make up for a weak story and plot holes. Marvin Miller and Margaret Wycherly provide interesting performances as George “Gusty” Gustafson, the milquetoast owner of a shipping line, and Miss Drumm, his secretary, who was his nanny when he was a child. Not quite the mother/son relationship that she had with James Cagney in White Heat, but a little creepy, nonetheless. Hoagy Carmichael appears as a character with the fabulous name of Celestial O’Brien. Carmichael had just had his film début in To Have and Have Not (1945). In Johnny Angel, he is a laconic cab driver who befriends George Raft and Signe Hasso.

When we first meet Celestial O’Brien, he is leaning against a wall and playing with a toy called a Gee-Haw Whammy Diddle. He plays with this toy throughout the film, always putting it in his top pocket when he has to do something else. This toy is a fascinating little item that is said to have originated in the Appalachian Mountains. It is simply a notched wooden stick with a small, wooden propeller that is attached to the end with a pin or finishing nail. While holding the notched stick in one hand, a straight stick is then moved up and down the notched stick, which causes the propeller to spin. Slight finger pressure on either side of the notched stick will cause the propeller to change direction; hence the name Gee-Haw Whammy Diddle.

Mules were trained to obey the voice commands “gee” and “haw”, to indicate whether they were to turn right or left, respectively. There is a film—Scudda Hoo! Scudda Hay! (1948)—about a young farmer, Lon McCallister, who is taught to be a mule driver by Walter Brennan’s character. The mules were trained to the commands “scudda hoo” and “scudda hay”, which mean “gee” and “haw”, the Appalachian slang for “right” and “left”. The Gee-Haw Whammy Diddle toy is also known as Ouija Windmill, Hoodoo Stick, or Voodoo Stick. The word Whammy is sometimes Whimmy, and Diddle can be Doodle; Gee-Haw can also be dropped. I’ve known the toy as a Whimmy Diddle for about 20 years, now.

In one scene in Johnny Angel, Celestial O‘Brien is playing with the Gee-Haw Whammy Diddle while a young boy watches. O’Brien asks the boy to whistle and when he does, O’Brien makes the propeller change direction, much to the boy’s fascination. At one point in the film, an angry Raft grabs Carmichael by the lapels of his coat and breaks the toy. O’Brien is quite upset by this, as can be seen by the look on his face. Raft apologizes and later in the film, asks Carmichael whether he’d fixed his toy. Carmichael smiles and shows him the repaired toy.