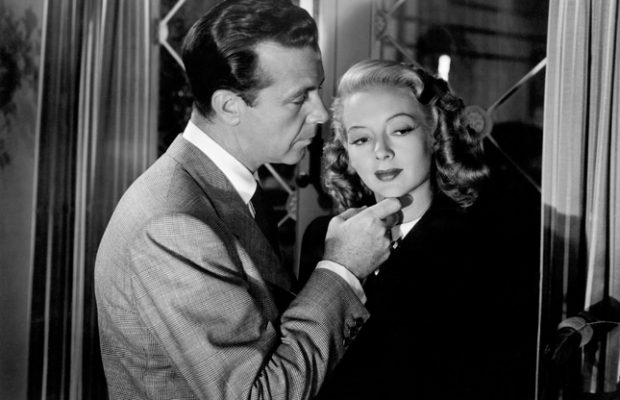 Toronto Film Society presented Johnny O’Clock (1947) on Monday, August 12, 2019 in a double bill with The Locket as part of the Season 72 Summer Series, Programme 5.

Toronto Film Society presented Johnny O’Clock (1947) on Monday, July 16, 2006 in a double bill with Follow Me Quietly as part of the Season 59 Summer Series, Programme 2. 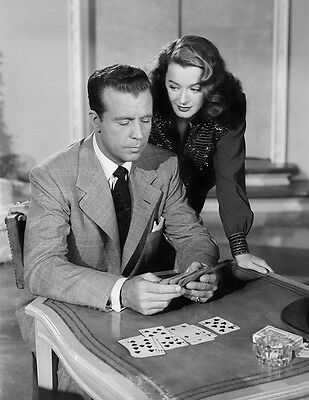 As written in our notes, Johnny O’Clock was Robert Rossen’s directorial debut.  Up until this time, he wrote screenplays, his last before literally changing direction was on The Strange Love of Martha Ivers starring Barbara Stanwyck.  Following this and in between these two films, he started working on the screenplay for The Treasure of Sierra Madre, with his hopes pinned on directing the film.  But when John Huston was given the job, (thankfully) he turned his talents towards writing the screenplay for Johnny O’Clock and that was when he was given his chance to direct.  Although completed in September 1946, the film wasn’t released until March 27, 1947 and by then Rossen was already working with John Garfield on Body and Soul, which was completed just one month after Johnny O’Clock was in the theatres.

Here’s the story of how Robert Rossen got his chance to direct.  In 1945 Dick Powell had made a sharp decision to change the direction of the types of films he was making by being cast as a strong tough-guy under the directorship of Edward Dmytryk in both Murder, My Sweet and Cornered.  He was set to continue with his new image by starring in Johnny O’Clock but he and Harry Cohn, the head of Columbia Studios, were not satisfied with the early drafts of the screenplay.  Cohn knew and liked the work Rossen did for Warner Bros. and director Lewis Milestone, and brought him in to make a fresh start on the story.  Both he and Powell were pleased with the results.

In the meantime, director Charles Vidor had sued Cohn to be released from his Columbia contract, claiming that Cohn had regularly insulted and abused him, and furthermore was being “punished” by being given the assignment of directing Johnny O’Clock, which he considered to be a minor film.  Cohn fought back, claiming that Vidor, now married to Jack Warner’s daughter, wanted to make a more lucrative deal with Warner Bros, and brought in witnesses to attest to the fact that he called everyone names such as “son of a bitch”, and it didn’t mean anything.

So, while this court battle was going on and with Johnny O’Clock being ready to go into production but with no director on hand to head the helm, Dick Powell went to bat for Robert Rossen.  The two men were able to convince Cohn that Rossen was right for the job by defining Rossen’s expertise in the gambler-gangster milieu along with his ability to produce fine work from weak material.  Rossen got to direct, and Cohn went back to exchanging insults with Vidor in the courtroom.

In May 1947, the House Committee on Un-American Activities conducted its first closed hearings in Hollywood, where Rossen’s turmoil would begin.

Incidentally, Vidor and Evelyn Keyes, who also stars in Johnny O’Clock, had been married, divorcing in May 1945, six months before Vidor married Doris Warner.  When Keyes was dropped by Cohn from Columbia for marrying John Huston, she had already been cast in Johnny O’Clock, and she surmised—although I don’t think this was true—that since this was Rossen’s first job as a director, maybe Cohn was hoping he would tumble downhill taking her with him.  I also would like to dispute our note writer’s claim that Keyes was a bland actress, especially compared to Teresa Wright.  Let me just leave it that we all have our own personal opinions, and likes and dislikes of actors.

Sourced from Scarlett O’Hara’s Younger Sister by Evelyn Keyes (1977) and Robert Rossen: The Films and Politics of a Blacklisted Idealist by Alan Casty (2013) 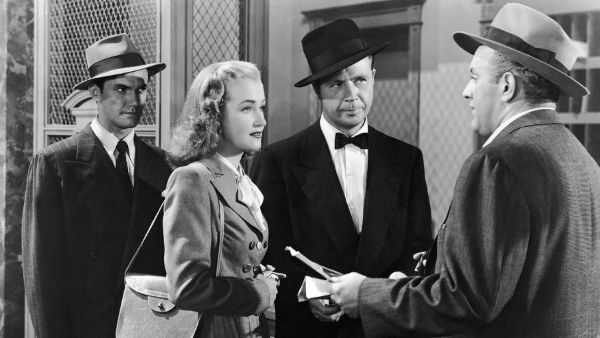 This film comes close to taking the prize for most improbably-named leading character, perhaps exceeded only by 1954’s Johnny Guitar. However, once you get past the unnerving moment of hearing a hat check girl address Powell as Mr. O’Clock (say, there’s a vanished occupation, along with the cigarette girl of Hollywood nightclubs—hardly anyone wears hats or smokes, these days), it’s obvious we have here a rattling good suspense yarn. Come to think of it, naming the leading character “Johnny” seems to have been a popular occupation in Hollywood; e.g., Johnny Eager and Johnny Allegro, to name just a couple, despite the fact that it is a diminutive mainly applied to juveniles. Then there was Gilda, where Glenn Ford’s character is named—what else?—Johnny. As Gilda says, upon their meeting: “Johnny—such a hard name to remember and such an easy one to forget.”

Here, Powell plays a gambler in trouble with the law. It was yet another of the former musical star’s departures from his previous life—playing hard-bitten, cynical, somewhat shady characters—which had begun with 1945’s Murder, My Sweet. It is probable that no other Hollywood actor revived his career as astutely as Powell did, and not once, but twice! In the early-1950s, as decent roles began to dry up for the Arkansas-born actor, he shrewdly moved into television, as both an actor and producer, and was extremely successful in the latter role. Those who knew Powell well likely weren’t very surprised, for he was a very intelligent, determined, and capable man. Had he not been cut off by death in 1963, Powell might have wound up as head of Warner Brothers itself, after Jack Warner’s retirement in 1965.

The cast of Johnny O’Clock was certainly first-rate, with the talented Robert Rossen (The Hustler; All the King’s Men) in the director’s chair. His career was somewhat truncated after he ran afoul of Senator McCarthy. Nina Foch was a Dutch-born actress who began starring in Hollywood films in the mid-1940s, including the memorable little noir My Name is Julia Ross. Ellen Drew was a competent but undistinguished actress whose career essentially began and ended with the 1940s. She had co-starred with Powell in 1940’s Christmas in July, and perhaps he had liked working with her and asked for her in this picture. Evelyn Keyes, as she is fond of reminding us, was “Scarlett O’Hara’s Other Sister”. Despite that auspicious beginning, she was generally a rather bland actress who had difficulty expressing emotion convincingly. This was no more evident than in 1948’s Enchantment, wherein she was no match for star Teresa Wright, an Academy Award winner and all-’round superb actress. Jeff Chandler was a recent arrival in Hollywood from Brooklyn, where he was known as Ira Grossel. He vaulted to stardom at Universal in the early-1950s, appearing mostly in programmers. He died circa 1961, in his mid-40s, of blood poisoning. Leaving the best to last, we conclude with Lee J. Cobb, a superb former stage actor from New York. That same year, 1947, he played a tough but compassionate police officer in Boomerang. Cobb was still at it 20 years later in Coogan’s Bluff, starring good old Clint.