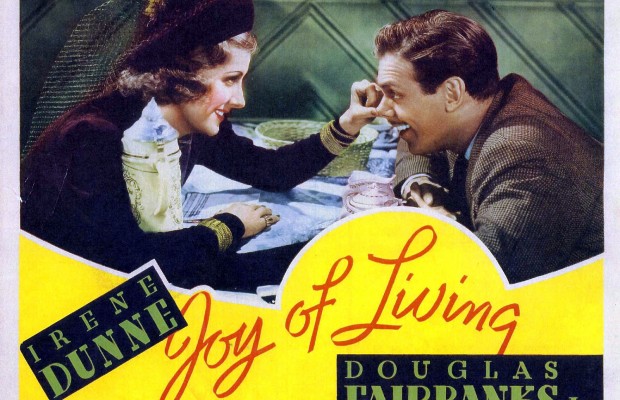 Toronto Film Society presented Joy of Living (1938) on Monday, January 23, 1978 in a double bill with They Won’t Believe Me as part of the Season 30 Monday Evening Film Buff Series, Programme 6.

Songs:  “Just Let Me Look At You”, “You Couldn’t Be Cuter”, “What’s Good About Goodnight”, “A Heavenly Party”.

Comedy, romance and slapstick.  Maggie Garnett, Broadway and radio musical star, latest and most successful member of a theatrical family, supports and looks after the whole family–in-laws included–so that she has little time or money for herself.  Dan Brewster, son of a wealthy Boston family, who believes that you should do what you want to when you want, and spends his time sailing and carrying cargoes between New York and the South Seas, falls for Maggie and decides to save her from herself and show her how to enjoy life.  …Irene Dunne (who is given several chances to sing some songs by Jerome Kern) and Douglas Fairbanks, jun., on whom the whole film depends more than make up by their performance for the slightness of the story, and carry off every situation from romance to slapstick, with ease and conviction.  The long drinking sequence is carefully handled and is genuinely funny; Irene Dunne’s efforts to maintain her dignity while she tries to control the lid of her beer-mug, her veil and a persistent but gentle hiccough begin a series of amusing sequences that end in riotous slapstick at a roller-skating rink. …

In the annals of the cinema there have been few more versatile or gracious screen luminaries than Irene Dunne.  No one more rightfully deserved the title “First Lady of Hollywood”.  Throughout the 1930s and 1940s Irene shone in a wide variety of film genres, bringing forth new aspects of her multiple talents to enhance each fresh film venture: chronicle drama (Cimarron), soap opera (Back Street), musical (Show Boat), Romantic drama (Love Affair), madcap comedy (Theodora Goes Wild, The Awful Truth), musical comedy (Roberta), or period piece (I Remember Mama, Life With Father).  On  camera Irene was the epitome of regal beauty, her trim figure topped by a classic, delicately dimpled face, with a patrician nose, cool dark eyes, a flow of dark brown hair, and capped by  her well-modulated voice, which could imply so much with just the slightest inflection.

Irene Dunne’s forte was indestructible dignity.  In the slushy melodramas she made at the start of her career she suffered with patience: she was noble in Cimarron.  When she turned to comedy she was invincibly ladylike–it is hardly a coincidence that Deborah Kerr inherited two or her old parts.  Kerr is possibly a better actress, but you can’t tell for sure: a different sensitivity was required in the well-oiled Dunne vehicles of the 30s than is needed in the more realistic (supposedly) films that Kerr makes.  Dunne perhaps had more lightness, more humour.  Few actresses couldplay comedy as she did: there is a brief sequence in The Awful Truth where,  her back to the camera, she is contemplating the antics of Cary Grant–her gurgling, smothered laugh is more eloquent than many another’s close-ups.  She was airy and rather super.

The Great Movie Stars: The Golden Years by David Shipman