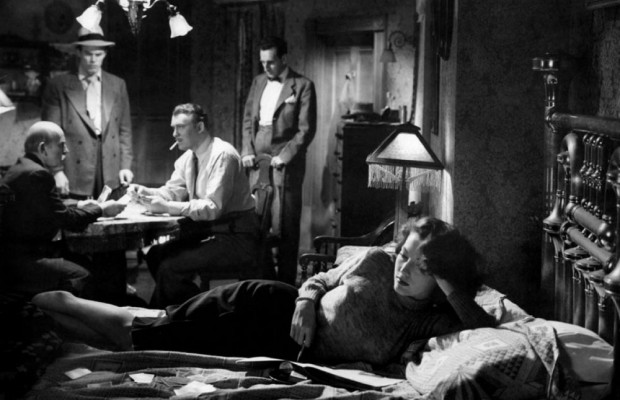 Toronto Film Society presented The Killers on Friday, May 11, 2012 as part of Season 65 May Festival: The Dead Men Don’t Wear Plaid Weekend.

Mark Hellinger tees off his first Universal production with a bang.  “Killers” is sock film fare for all situations.  Seldom does a melodrama consistently maintain the high tension that distinguishes this one.  There’s never a letup, all factors combining to keep audiences on edge of seats.

Taken from Ernest Hemingway’s story of the same title, picture is a hard-hitting example of forthright melodrama in the best Hemingway style.

Performances without exception are top quality even though names do not have assured boxoffice.  It’s a handpicked cast that troupes to the hilt to make it all believable.  Film introduces Burt Lancaster from legit.  He does a strong job, serving as the central character around whom the plot revolves.  Edmond O’Brien, insurance investigator who probes Lancaster’s murder, is another pivotal character who adds much to the film’s acting polish.

Robert Siodmak’s direction is adroit in maintaining punchy proceedings.  He has added touches that come through with a wallop, builds tension almost to breaking point, and gets the best from the players.  Script by Anthony Veiller didn’t miss a bet in shaping the Hemingway story into forceful screen material making for a very solid foundation for the playing.  Plot opens with Lancaster’s murder in a small town.  O’Brien takes it from there, trying to piece together events that will prove the murder of small-town service station attendant has more significance than appears on the surface.  Story has many flashbacks, told when O’Brien interviews characters in Lancaster’s past, but it is all pieced together neatly for sustained drive and mood, finishing with expose of a colossal double-cross.  Every character has its moment to shine and does.

Ava Gardner, bad girl of the piece; Albert Dekker, her cohort in crime and murder; Sam Levene, a thoroughly believable cop; Charles McGraw and William Conrad, as menacing a pair

of killers as yet shown on the screen; Vince Barnett, Jack Lambert, Jeff Corey, Virginia Christine, Donald McBride, Phil Brown, John Miljan, Queenie Smith and all the others in the cast deserve kudos for performances.

Hellinger assured a music score that would heighten mood of this one by using Miklos Rosza, and the score is an immeasurable aid in furthering suspense.  There’s also one pop number, “The More I Know of Love,” by Jack Brooks and Rosza spotted by Miss Gardner.  Low key lighting and natural settings are pointed up by Woody Bredell’s standout lensing.  Editing is tight despite 103 minutes running time.

THE KILLERS, screen play by Anthony Veiller, based on a story by Ernest Hemingway; directed by Robert Siodmak; produced by Mark Hellinger for Universal.  At the Winter Garden.

Back in the gangster-glutted Twenties, Ernest Hemingway wrote a morbid tale about two gunmen waiting in a lunchroom for a man they were hired to kill. And while they relentlessly waited, the victim lay sweating in his room, knowing the gunmen were after him but too weary and resigned to move. That’s all the story told you—that a man was going to be killed.

What for was deliberately unstated. Quite a fearful and fatalistic tale.

Now, in a film called “The Killers,” which was the title of the Hemingway piece, Mark Hellinger and Anthony Veiller are filling out the plot. That is, they are cleverly explaining, through a flashback reconstruction of the life of that man who lay sweating in his bedroom, why the gunmen were after him. And although it may not be precisely what Hemingway had in mind, it makes a taut and absorbing explanation as unreeled on the Winter Garden’s screen.

For the producer and writer have concocted a pretty cruel and complicated plot in which a youthful but broken-down prize-fighter treds a perilous path to ruin. Mobsters and big-time stick-up workers get a hold on him, and a siren of no mean proportions completely befouls his career. In the end, we perceive that the poor fellow—who is bumped off in the first reel, by the way—was the victim of love misdirected and a beautiful double-cross.

This doesn’t prove very much, obviously, and it certainly does not enhance the literary distinction of Hemingway’s classic bit. But, as mere movie melodrama, pieced out as a mystery which is patiently unfolded by a sleuthing insurance man, it makes a diverting picture—diverting, that is, if you enjoy the unravelling of crime enigmas involving pernicious folks.

With Robert Siodmak’s restrained direction, a new actor, Burt Lancaster, gives a lanky and wistful imitation of a nice guy who’s wooed to his ruin. And Ava Gardner is sultry and sardonic as the lady who crosses him up. Edmond O’Brien plays the shrewd investigator in the usual cool and clipped detective style, Sam Levene is very good as a policeman and Albert Dekker makes a thoroughly nasty thug. Several other characters are sharply and colorfully played. The tempo is slow and metronomic, which makes for less excitement than suspense.