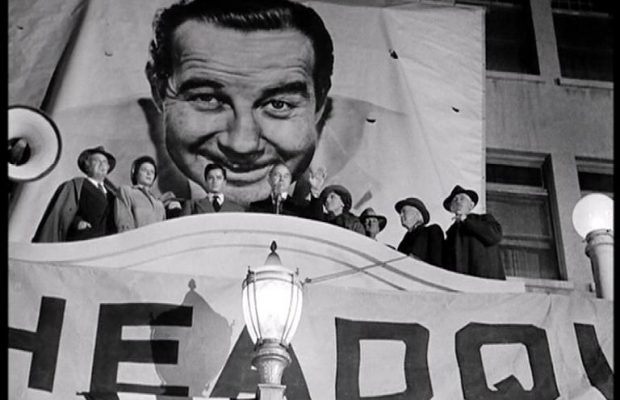 Toronto Film Society presented All the King’s Men (1949) on Monday, March 17, 1980 in a double bill with The Miracle of Morgan’s Creek as part of the Season 32 Monday Evening Film Buff Series, Programme 7.

Surely no one could have foreseen at the time of the release of Robert Rossen’s movie from Robert Penn Warren’s novel “All the King’s Men” how darkly this thundering melodrama about an unscrupulous political leader in the South cast an ominous shadow of future happenings on the American political scene.  Although it was patent that the novel–and the movie, of course–were prompted by the awesome and ambiguous aspects of the sordid career of Huey Long, a former governor of Louisiana and then a United States senator who was killed by an assassin in 1935, the presentiment given in the picture of the kind of violence and seeking after power that were to prevail on the national scene in the next two decades make it today as prophetic.

When it came out, we generally hailed it as one of those blistering postwar American films that were more or less inspired by the example of the Italian neorealists to cast an unrelenting spotlight on some of the seamier sides of American life.  Like a few of the prewar sound films–the gangster classics especially–it made a distinct contribution to public awareness and emotional concern.  After all, this was a picture about a type we had observed.  But the clanging alarm it sounded about the danger of unscrupulous men capturing and using high office to aggrandize themselves and the hideous preview it gave us of political assassination in this country were admonitions that only later struck home.

So this historical perceptivity is one of the reasons why All the King’s Men still stands out as a great American film.

But beyond that–which was clearly not its virtue in 1949–it was a turbulent and engrossing contemplation of a few hectic years in the life of a self-made and self-styled backcountry, dirt-road, red-necked hick who clawed his way up from that environment to supreme political power in an unspecified Southern state and crudely indulged his towering ego until he was killed by an avenger’s gun.  With aggressiveness and vitality of an order seldom seen in fiction films, it ranged from raw-boned melodrama to dark psychological depths.  Consistency of dramatic structure–or of character revelation–it did not have, but it throbbed with superb pictorialism to match that of the finest documentary films, and it popped with kind of realism that was evident in John Ford’s earlier The Grapes of Wrath.

Because of this rich pictorialism, which embraced a wide and fluid scene, it gathered a frightening comprehension of the potential of demagoguery in this land.  From narrow and ugly illustrations of back-room spittoon politics to wild illuminations of howling political mobs, it caught the dreadful aspects of mass ignorance and high-class greed when stirred by deceitful politicos.  It visioned the public spellbinders and the back-room hypocrites for what they were, and it looked on extreme provincialism with a candid and cynical eye.

In short, Mr. Rossen assembled in this starkly unprettified film a piece of pictorial journalism that was remarkable for its brilliant parts.  It fairly observed the beginnings of a Huey Long type of populist in an humble and honest night-school lawyer in a sleepy courthouse town, earnestly fighting the bosses to try to get something done for the benefit of the poor–the lanky, foot-shuffling dirt farmers, their overworked wives, and their underfed kids.  It followed this disillusioned fellow as he absorbed politics and discovered the strange intoxication of his deliberate cracker-barrel charm.  And it raced with him through crooked campaigns and finally landed him squarely in the governorship…

All of these things Mr. Rossen pictured stunningly.  The final episode of mob hysteria and personal violence fairly bursts with savagery.  But in his parallel endeavors to transfer from Mr. Warren’s book some clear understanding of Willie, he met with less success.  In fact, the midsection of the movie, which was almost entirely concerned with nerve-racking impact of the fellow upon his wife, son, mistress, and friends was a baffling confusion of dramatics that was saved only by the abundant pictorial detail.

Contributing to the film’s success was the raw performance that Broderick Crawford gave as the big, brawling, boisterous, hick lawyer who made himself a briefly reigning king.  Mr. Crawford packed energy and color into every delineation he gave, whether it was of the enthusiastic bumpkin or of the scowling and drunken demagogue.  And although it was difficult to fathom why Willie really went the way he did, shifting so swiftly in his nature and his ideologies, it must be said that Mr. Crawford made the portrait of an egomaniac exciting and compelling.