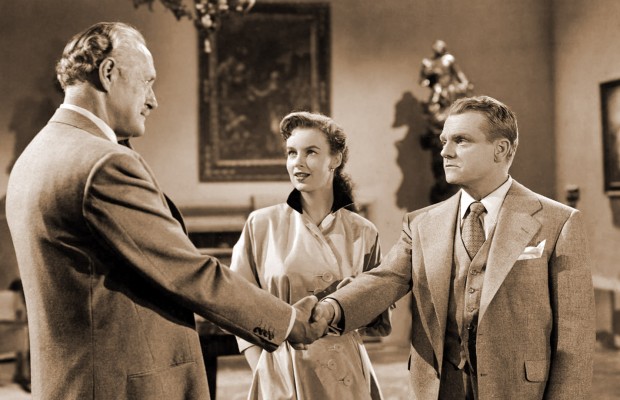 Toronto Film Society presented Kiss Tomorrow Goodbye (1950) on Monday, January 20, 1975 in a double bill with All I Desire as part of the Season 27 Monday Evening Film Buff Series, Programme 3.

Gordon Douglas (b. in New York in 1909) began as a child actor in films at the age of three; then worked briefly for MGM and Paramount until he settled at the Hal Roach studios as an actor, gagman, assistant editor, assistant director and finally a director of shorts in the mid 1930s (including the “Our Gang” series).  Since he directed his first feature in 1939 Douglas has averaged two films a year until the early 1970s–almost all of them programmers and easily forgettable.  His finest films were: Kiss Tomorrow Goodbye, I Was a Communist for the FBI (1951), Come Fill the Cup (1951–also starring James Cagney), Them (1954) and Tony Rome (1967).  Douglas could best be described as a competent craftsman who, though never able to manufacture greatness from his material, at least kept out of the way of it.

James Cagney (b. in New York, July 17, 1899) was the best gangster there ever was.  His defiant dynamism and snarling sense of humour dominated all of his roles, but were most appropriate to the gangsters he played.  Cagney’s development as a hood through the years accurately reflected the increasing complexity of the genre from the late twenties through the dirty, depression thirties, climaxing in the film noir gangster epics of the mid 1940s.  By the time of White Heat (1949) and Kiss Tomorrow Goodbye Cagney had evolved into a psychotic criminal without peer.

All of the performances in Kiss Tomorrow Goodbye are solid.  Cagney, of course, stands above the rest.  William Frawley has a wonderful bit as a rasping prison guard.  Rhys Williams is effective as a slyly reluctant crook.  Most memorable are Bond and MacLane as two corrupt cops.  These same two actors were merely shady detectives in 1941’s The Maltese Falcon, one of the earlier ‘black’ films.  As the decade progressed, they were promoted, to inspector and lieutenant respectively, while all questions of their morality were settled.

Kiss Tomorrow Goodbye is one of the very blackest of films.  Not one character has any redeeming social merits or elicits any audience sympathy.  Police corruption, blackmail, payoffs, gambling, revenge and murder are but a few of the activities.  Cagney has never been as physically brutal in a film–he particularly enjoys beating people who accuse him of insanity.  The story, concerning Cagney’s attempts at getting ahead in crime after an opening jailbreak, is standard, though the format is varied a bit by having the participants relate the events in an after-the-fact Citizen Kane-manner.