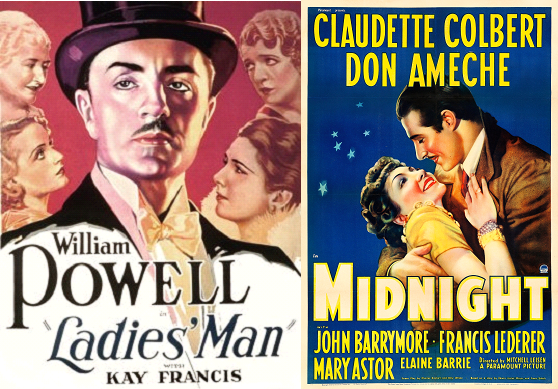 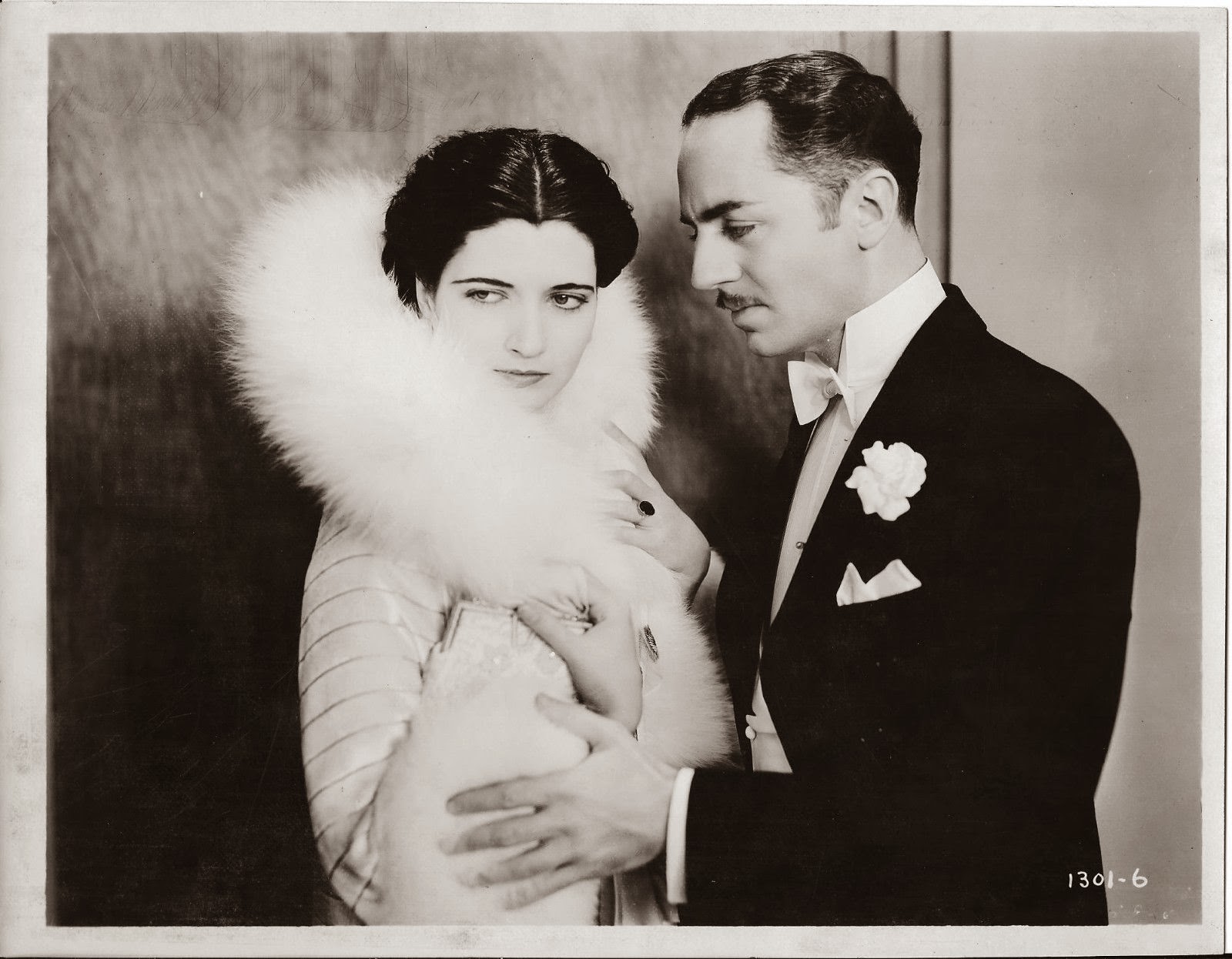 Recently, there have been several films which document the making of a film as it goes through the various stages of production.  Had a filmmaker decided to do this as Mitchell Leisen was making the screwball comedy, Midnight, he might have ended up with a film which was a lively as Leisen’s, for the cast of characters who worked on Midnight were as eccentric as any which the scenarists, Charles Brackett and Billy Wilder, might have dreamed up.  Right from their first meeting, the flamboyant Leisen, who entered films as an art director and costume designer for C.B. DeMille, clashed with the tempestuous Billy Wilder over changes in the script.  There seemed to be no common meeting ground between Wilder who believed that the script was not to be tampered with and Leisen who pragmatically believed that “if the actors couldn’t say a line, then we must give them something to say.”  As a result of their conflict over rewrites, Wilder and Leisen became life-long enemies and each believed that it was his particular talent which raised the film above the pedestrian to create a screwball comedy which some critics rank as one of the best made in Hollywood in the thirties.  Wilder felt that Leisen was far too interested in the pleat of a costume or a rug on the floor.  Leisen, on the other hand, believed that his lighter comic touch softened the cynicism of the Brackett/Wilder script resulting in a film which was more enjoyable for the audience while retaining “satire on class attitudes and its insights into the relationship between wealth and happiness.”  In an interview with David Chiericetti, Leisen took great delight in recounting the story of a visit he made to the set of a film which Wilder was directing.  Leisen found him furiously rewriting a script so that an actor could be more comfortable with a line.  Of course, Wilder later had his revenge on the excesses of art directors in the film, Sunset Boulevard, which logically incorporates into its brilliant design the clutter and rococo which too often overwhelmed and dominated the action of other films.  What might have emerged had a film been made about the making of Midnight was the revelation that the creative chemistry which came from the clash of two wills as strong minded as Leisen’s and Wilder’s had as its result a more accomplished piece of work than they would have achieved had they worked with more accommodating collaborators.

Aside from the difficult Wilder, Leisen had to contend with John Barrymore who dealt with the tension on the set by taking to the bottle more enthusiastically than he normally did.  Though Leisen had hired Barrymore’s wife, Elaine Barrie, to police her husband, Leisen still had difficulty keeping Barrymore in line, for he would relieve himself on the set as necessary and he refused to memorize his lines, relying on cue cards for his dialogue.  Leisen seems to have had great patience with the eccentricities of his actors; he said that Barrymore was “sheer heaven, just fantastic” and he stated that he enjoyed working with Claudette Colbert, for he admired her instinctive sense of fashion.  Although Leisen did not agree that the right side of Colbert’s face photographed better than the left side, he went along with her demands in this regard.  Colbert herself enjoyed working with Leisen, for he gave the actors a great deal of freedom to develop their roles. Though Leisen’s reputation as a director has fluctuated, one must admire the way that he orchestrated the work of the diverse personalities involved in this production to create a film which the New York Times described as “one of the liveliest, gayest, wittiest and naughtiest comedies of a long hard season.” 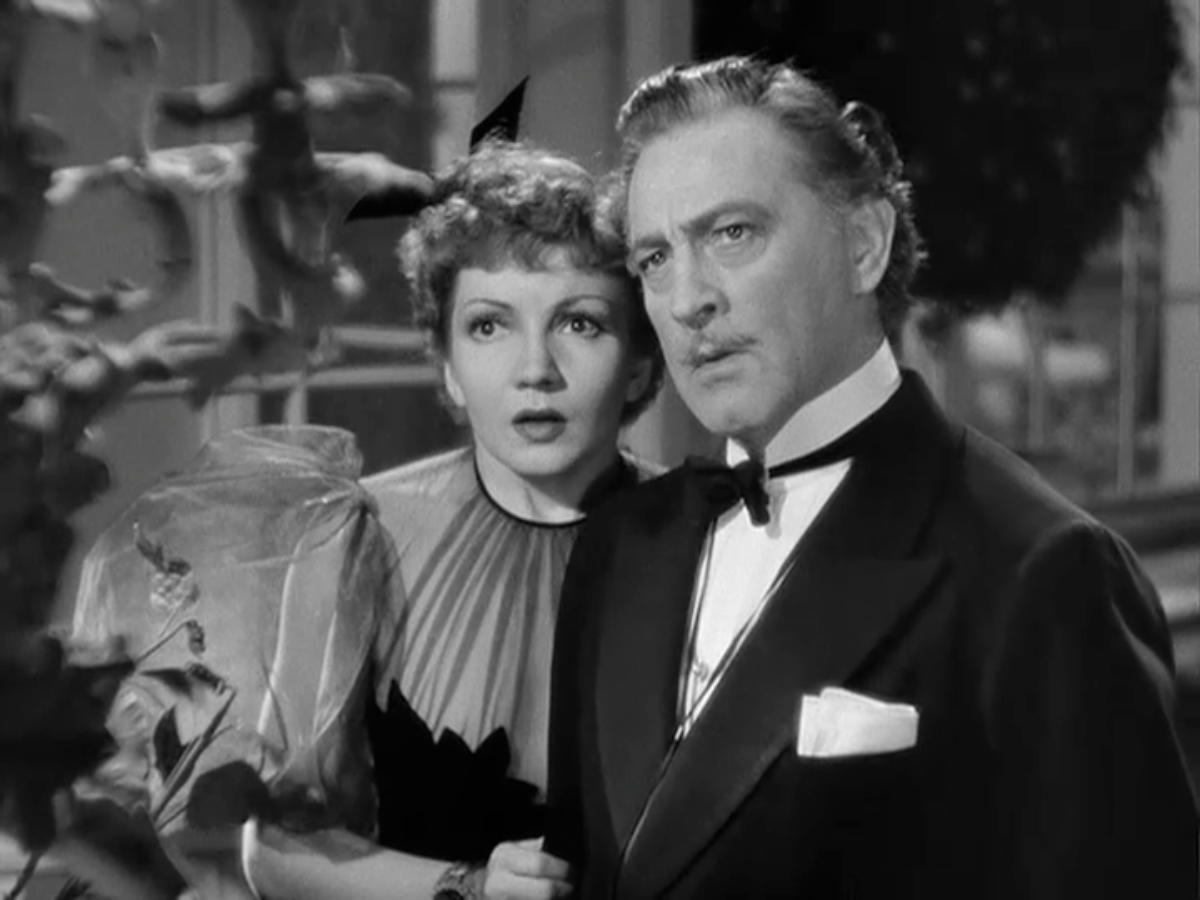 Though the Brackett/Wilder script was and is still highly regarded by critics, Herman Mankiewicz’s script for Ladies’ Man did not fare so well in the view of contemporary critics.  The reviewer of the New York Times did concede that the “script had some comparatively grown up dialogue”, but he noted that a young man in the audience said that “the film seems pretty good, but I can’t make out what it is all about.”  Variety had nothing complimentary to say about the script and described the dialogue as “stilted and trite, written and delivered as highbrow stuff as a lowbrow might imagine it.”  What one might conclude from these reviews is that Mankiewicz was less successful in this film at “making it up as he went along” than he was when he wrote the acclaimed Citizen Kane.

According to the New York Times, what redeemed the film was William Powell’s “intelligent performance as the fashionable gigolo.”  Powell brought to his roles a high degree of professionalism; at the time of his death last year, his colleagues recalled that he was always well prepared and they praised his gentlemanly behaviour on the set.  Had Powell stuck to the law career that his father intended for him, film audiences would have been deprived of the pleasure of watching his performances in films such as The Thin Man and My Man Godfrey.  Fortunately for us, he abandoned his law career, borrowed some money from a wealthy aunt (a loan which he later repaid with generous interest) and took off for New York where he attended classes at the Academy of Dramatic Arts with other aspiring actors such as Edward G. Robinson.  Powell decided that the film industry offered an actor more stability than the theatre so he left New York for Hollywood.  Although he is primarily remembered for his roles as urbane witty gentlemen, he began his career in silent films playing villains.  When the role of the detective, Philo Vance, was offered to him, he was delighted, for it allowed him to use his skills as a comic actor.  Despite several memorable screen performances in a career which spanned 95 films, he never received an Academy Award either for an individual performance or for his contribution to the industry in general.

Though the films screened this afternoon are both comedies, they are a study in contrasts.  Ladies’ Man, made early in the sound era, seems to be redeemed only by the work of its cast, especially William Powell, and it is an example of comic writing which was not limited by the constraints of the Hayes Code.  Midnight, shot at the end of the thirties, was blessed with a strong cast, a talented production crew, a reliable director who was able to deal with obstreperous personalities, and a pair of writers who had the skill to get around the Code and make their point in a subtle way.  In eight short years the industry had adjusted itself to the addition of sound, and despite the limitations of the Hayes Code, a comic form had been developed by Hollywood screenwriters which was perfectly suited to the film medium.  At Paramount, the business men who ran the studio recognized the bankability of screwball comedy like Midnight and they spared no expense and effort to achieve a worthwhile product.