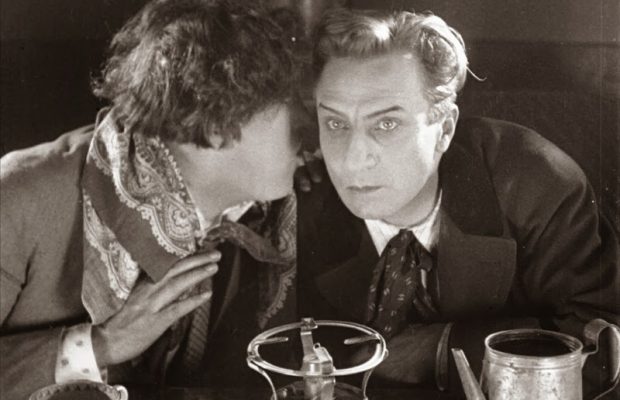 The programme will open with Mighty Like a Moose, a two-reel Hal Roach comedy starring  Charlie Chase.  This will be followed by a ten-minute intermission, then the feature film.

Le Feu Mathias Pascal is perhaps one of the lesser-known works of L’Herbier, best-known for his work during the avant-garde period (L’Homme du Large, L’Inhumaine) and one of the most prolific of French directors.  Writing successful scenarios as early as 1914, he was still making films in the 1940’s (La Vie Boheme, La Nuit Fantastique).  He directed Pierre Fresnay, Louis Jouvet, Fernand Gravey and Micheline Presle; his collaborators included Jean Cocteau, Fernand Leger, Cavalcanti and Claude Autant-Lara.  His stories ranged from the 19th century realism of Balzac to the intellectual abstruseness of Pirandello.  Critics have said of The Late Matthew Pascal that it is an actor’s film; that only the superb acting of Mosjukine makes it a really successful screen comedy.  Mosjukine, himself a director, was then a Russian emigre living and working in France, famous for his performances in Michael Strogoff, Casanova and Le Rouge et Le Noir.  As a comedian his style in Pascal is similar to that of Guiltry (Le Roman d’un Tricheur) and in the same way the appeal of his personality is primarily intellectual.  His expressionless face can speak volumes and his quick, often jerky movements show his tremendous acting power when contrasted with other “dead-pan” comedians like Harold Lloyd.  The part he creates in this film is that of the cynic, the ironic and detached observer of even his own affairs;  the romantic ending where he lives “happily ever after” seems unconvincing and denies the satire underlying the rest of the film.  In the Pirandello original the story is told in flashback by a hero already dead.  The film is Pascal’s story and he is on the screen almost the whole time.  The demands made upon the actor by this fact are similar to those made on Jannings in The Last Laugh; yet Mosjukine has to act infinitely more variations than Jannings.  The decor was by Cavalcanti, soon to leave France for the G.P.O. Film Unit in England, and Lazare Meerson who later worked with Rene Clair in Le Million.  Somewhat reminiscent of the later German silent films, the designs were primarily aimed at dramatic effect.  Except for the delightful scenes in the library, they serve merely as a background for the actors and have little independent beauty or importance.  The slightly theatrical effect of this originated perhaps with Pirandello’s story and was further emphasized in the film by the lighting.  Shadows seem to dominate the scene (except in the early sequences with the baby); the actors move in the gloom and are revealed (often literally) by a spotlight.  This is further accentuated by the frequent use of the iris-in and -out.  The curiously unreal effect is particularly noticeable in the village fair scenes.  This setting normally so gay and colorful is reduced here to comparative gloom and is only relieved by the soft-focus photography for Romilde.  The camera concentrates on close shots of actors; long shots seem to be inserted only to relieve the tension of continuous closeups; while the soft-focus photography, in addition, seems to draw a haze of fantasy over the whole scene.

Says Georges Sadoul: “When the portable camera was put into the hands of L’Herbier, he was drunk with the new joyful possibilities into which he plunged wholesale–with the lack of discrimination that belongs only to the intoxicated”–but calls Pascal “a good film–Cavalcanti’s very remarkable sets anticipated Orson Welles in the great use he made of ceilings”.

Paul Rotha opines: “L’Herbier is the supreme virtuoso of the French cinema, his films at all times revealing a high degree of technical accomplishment.  His work suffers from over-intellectuality–essentially the cinematic aesthete rather than the film director.  His technique is too brilliant to be convincing, too clever to be of purpose for dramatic expression”.

Bardeche and Brasillach in History of the Film feel that “about L’Herbier there is little to be said” and list Pascal in a group they consider “simply commercial films of practically no interest”.  But the book’s editor, Iris Barry says in a footnote: “In the editor’s opinion Pascal was a film of considerable and abiding interest”.

N.Y. Museum of Modern Art calls it “the archetype of ‘highbrow’ films”!