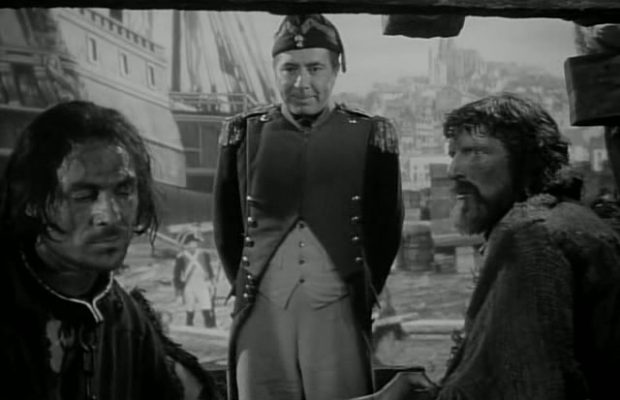 Toronto Film Society presented Les Miserables (1952) on Sunday, October 15, 1989 in a double bill with The Phantom of the Opera as part of the Season 42 Sunday Afternoon Film Buffs Series “A”, Programme 1.

Victor Hugo’s epic novel, Le Misérables, is far more likely to turn up on a university literature course than Leroux’s potboiler, Le Fantôme de l’Opéra.  In fact, the Hugo novel, translated into many languages and constantly in print, is considered to be a key work in the lengthy career of this prolific French poet, playwright and novelist.  Written during Hugo’s exile to the Channel Islands, Le Misérables (1862) is a majestic study of the opposition between an unbridled quest for justice, on the one hand, and a well-earned right to compassion on the other.  Hugo’s well-publicized bitterness towards the France of Napoleon III is best expressed in this fictional exposé of human injustice and in his harshly satirical volume of poetry, Les Châtiments (1853).

Hugo’s literary trademark is his whole systematic exploitation of contrasting themes, characters and moods.  One of his most characteristic pairings is the opposition between the grotesque and the sublime, a pairing which figures tellingly in Hugo’s own treatment of the beauty and the beast legend, Notre-Dame de Paris (1831).  In this tale, often filmed as The Hunchback of Notre-Dame, the beauty of Esmeralda is the antithesis of the physical deformity of Quasimodo.  (One wonders when the musical comedy composers will discover this material for a new production…)  In Le Misérables, the contrasts are just as prevalent, and can be itemized in terms of goodness and evil, compromise and pig-headedness, love and hatred, loyalty and treachery, etc.  Such are the themes, of course, of great dramatic literature, and the potentials for strong emotional confrontation scenes, life and death adventures, and powerful scenes of revelation and concealment have often attracted filmmakers to Le Misérables. 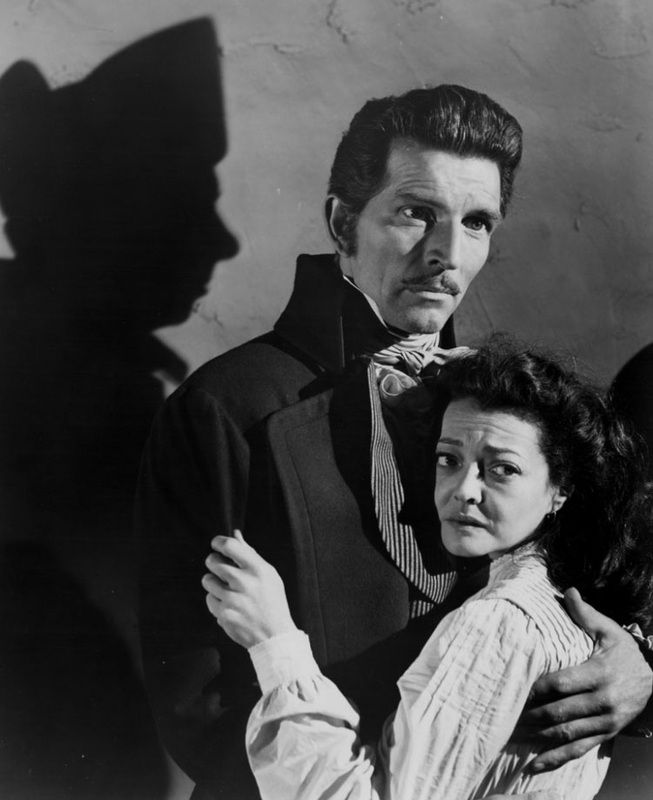 The 1952 Fox version was, it would appear, the seventh filming of Les Misérables.  North American audiences will be most familiar with the 1935 version with Fredric March as Jean Valjean and Charles Laughton as Javert.  But only a few months earlier in 1952, an Italian version was released to New York audiences.

Director Lewis Milestone (who no longer earned quite the respect he had won in the early 1930s with films like All Quiet on the Western Front and The Front Page) fortunately found himself assigned a strong cast and some careful set designers who were long on atmosphere.  The result is a more than respectable film, lit and photographed with care.  The script wisely separates the novel’s content into three episodes: 1. Valjean’s arrest for stealing bread and his imprisonment; 2. His becoming mayor and adopting Cosette; 3. Javert’s haunting of Valjean because of missed parole.  But perhaps because of this tidy paring down of the abundant plot material, several critics complained that this version lacked depth.

Deep or not, the film certainly has style–provided in part by what is currently called ensemble acting.  It is a joy in particular to watch veteran character actors like Edmund Gwenn, Sylvia Sidney, Elsa Lanchester, James Robertson Justice, Rhys Williams and Florence Bates carry on so comfortably in the world of Victor Hugo.  But Toronto audiences of 1989 may be surprised to see that not one of them sings a note!  Hugo must be relieved…