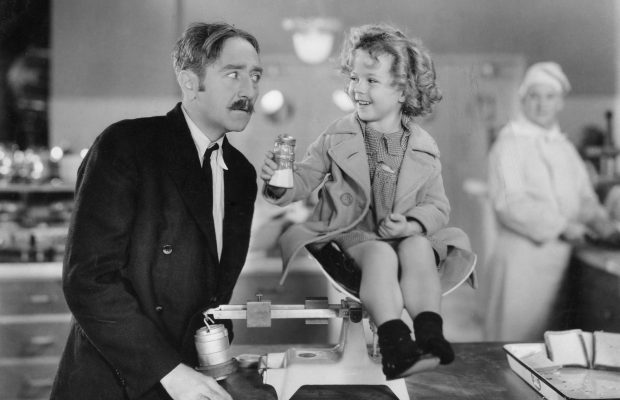 Shirley Temple was signed with Fox Studios and her biggest role up to tonight’s film was in Stand Up and Cheer.  Up until then, starting in 1932 when she was just about to turn four, she had bit parts, mostly in shorts.  Her mother, Gertrude, was worried that Shirley would continue to be relegated to bit roles for the next several years and took the rein in her hands by reintroducing herself, and Shirley, to Henry Hathaway at Paramount who had been kind to them on a previous film.  At this meeting, it was suggested that they see director Alexander Hall who was to direct Little Miss Marker, a film that Gertrude was aware of being in the works for Paramount.  What had they got to lose but a walk down the hall to see Hall.  So while Gertrude waited outside of the director’s door, Shirley was given what she called a three-word test—“aw nuts!” and “Scram!”  The part was hers.

Shirley had never ridden a horse before, so for the scene where she is thrown from a horse, Shirley was wired to an overhead crane, not visible in the final print.  When the horse bolts, she flies off and then was carefully lowered to the ground by the crane which controlled the wires.  Such a pro at such a young age, only one rehearsal and one take were required.

In the days of US racial segregation, Shirley Temple was probably the only white female to dance with black performers, which was normally considered taboo.  But because she was a child and therefore her performances would be considered desexualized, which is a very simple and surface projection of Shirley, we are fortunate to enjoy her play against many of the black stars of her time.  The major performers in her films were Stepin Fetchit in Stand Up and Cheer and Dimples; Bill Robinson, Hattie McDaniel and several children in The Little Colonel; McDaniel, Robinson, Willie Best and Bessie Lyle in The Littlest Rebel; Robinson in Rebecca of Sunnybrook Farm and Just Around the Corner; and with Willie Best in today’s film.  When she was in her teens, she was only allowed to perform with black female actresses, McDaniel in Since You Went Away and Lillian Randolph in The Bachelor and the Bobby Soxer.

Shirley’s the “marker” as a security I.O.U. left with a bookie, and Menjou’s got his hands full dealing with gamblers, too. A nifty film version of a Damon Runyon story. – Barry Chapman

How a child of 4 touched the hearts of a band of race-track ruffians is told in Little Miss Marker, the current film at the Paramount. This picture is a delight in many respects, for it has been produced so pleasingly and with such efficient portrayals that only a dyed-in-the-wool cynic could fail to be affected by its sterling humor and pathos. The story, one written by Damon Runyon, is blessed with originality and it has been adapted to the screen in an understanding fashion.

Considering that some of the adult characters are known by such names as Sorrowful Jones, Bangles Carson, a torch singer; Big Steve, Regret, Sun Rise, Dizzy Memphis, Buggs, Sore Toe and Bonnie the Gouge, it is surprising that the tale possesses so much tenderness and charm. The closing incidents may seem superfluous and somewhat melodramatic, but even so they are set forth with a measure of suspense.

Little Shirley Temple, the lovely tiny lass of Stand Up and Cheer, is virtually the stellar performer in the present work, and no more engaging child has been beheld on the screen. She appears as Little Miss Marker, so named because she is left with the bookmaker, Sorrowful Jones (Adolphe Menjou), virtually in pawn for her father’s $20 bet. Jones is averse to taking the so-called “markers,” but Marky, as she eventually becomes known, attracts his attention. The father does not return and it is understood that he ended his unhappy existence with a bullet.

Tiny Shirley Temple is a joy to behold and her spontaneity and cheer in speaking her lines are nothing short of amazing. Mr. Menjou has given much fine acting to pictures, but he has never done anything better than his characterization of Sorrowful Jones. Dorothy Dell as Bangles Carson also contributes real talent. Lynn Overman, Sam Hardy, Warren Hymer and Frank McGlynn Sr. are among those who make the most of their good opportunities. – New York Times, By Mordaunt Hall, May 19, 1934