Production Company: Columbia, distributed by Ealing Films.  Director: Marcel Varnel. Screenplay: Austin Melford, based on the play “As You Live” by Hugh Deardon.  Cameraman: Gordon Dines.  With Harry Bidgood and his Orchestra.

Tonight, the Lancashire lass meets the Lancashire lad, as we present two seldom-seen British comedies featuring Gracie Fields and George Formby.  Although our two films tonight were made six years apart, the two stars shared the spotlight in Britain for a good many years together.

Most of the names in the supporting casts will not be familiar to filmgoers brought up in North America, but they present those unique, unforgettable faces which the British seemed to have in droves..all of which were just right to fit the occasion.  They bring the feeling of “real people” in a “real world”..far from the glamour of the Hollywood superstar of the same era.

Look Up and Laugh is the story of a “crusader” as Grace Pearson leads the market-stall holders in their effort to prevent the shut-down of the market which provides them with their livelihood.  Black is black and white is white in the film, with the common folk pitted against big business to survive.  The hold-out in the market rivals “Custer’s Last Stand”, except that, in this case, the “little people” come out as the victors. 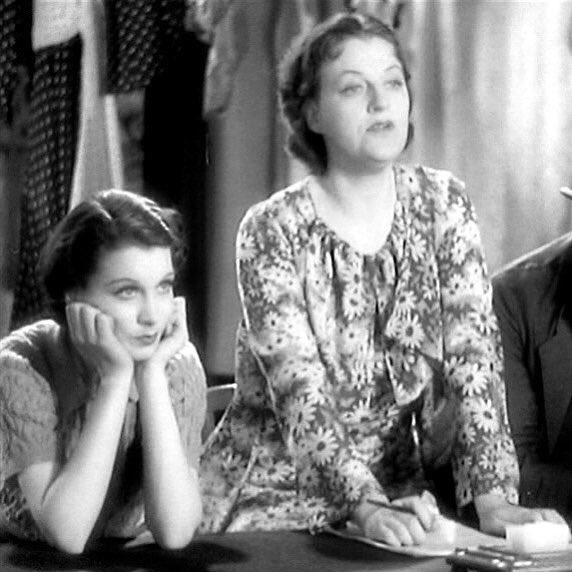 In its review of the film, Variety noted that, like earlier Gracie Fields films, it was not the sort of material calculated to bring long queues out in the West End but added that it would do well “in the provinces.”

Variety, though, has nothing but praise for the star herself: “One thing is certain, she is an exceedingly clever clown, one of the few females in the world who has ever attained any heights in that field.  Her talents are still far from being developed to their capacity.  The main trouble seems to be that having been born a Lancashire girl, and having made good with that dialect, nobody has yet had imagination to switch her into something different.”

“Priestley, the novelist, has supplied her with a machine-made story.  Its unfolding is executed via the medium of the roughest hokum and horseplay, augmented, however, by excellent direction, a splendid company of West End actors, good photography, an elaborate production, and the handling of mob scenes is worthy of a better vehicle.  There are one or two catchy numbers, especially “Love is Everywhere.”

Gracie Fields was born in Rochdale, Lancashire in 1898, and moved into films in 1931 by Basil Dean, who is also her director in tonight’s film.  She quickly became Britain’s highest-paid film star.  Her warm-hearted optimism was particularly welcome during the depression years.  When war came, she was exiled to Hollywood, and far less interesting productions, but was one of the favorites during the war years as she entertained tens of thousands of troops..often not far from the front lines.  Her first film was Sally in the Alley (1931) and Look Up and Laugh was her sixth.  Her final appearance came in 1945 in the American-made Madam Pimpernel.  She died in 1979.

Director Basil Dean was a West End stage producer who was lured into films and found Associated Talking Pictures in the early thirties.  It later became Ealing Studios.  He became head of the Government-sponsored body which produced live performances for the armed services during the Second World War, and was awarded the CBE.

And, look for Vivien Leigh in one of her earliest roles in the film.  It was her fourth picture, and saw her move on quickly, with Fire Over England and Dark Journey her next two film appearances.

In It’s Turned Out Nice Again, George Formby is at the height of his film success.  Formby (1904-1961) was born in Wigan, Lancashire, the son of a famous music-hall artist.  He followed his parents onto the stage..with the toothy smile, and the “ukelele” (actually a banjo), familiar trademarks, along with the risque (fort he time) song lyrics.

In one of the few available reviews of this film, Variety notes the theme (underwear) and the song lyrics might make the film somewhat unsuitable for children.  (However, as you’ll notice in tonight’s print, the British Censor Board granted a “Universal” rating.)

The plot centres around the modern and the traditional in the underwear business, with George working for the old-fashioned “Dawsons” firm..with its woolen knickers and shapeless nighties pitted against the modern daring styles.

Again, it was Basil Dean who took George Formby out of the realm of a North country celebrity and built him into a full-fledged star.  By the end of the 30’s, he was the top male performer at the box office.

However, comedy styles changed, and his last film–George in Civvy Street (1946)–received only minor distribution.

He made a farewell appearance in Canada, with a British Variety show in the early 1950’s, and the crowds turning out showed he was still a popular favorite.

(Just a note for film buffs who enjoy seeing technical snafu’s.  Very early in the film, as George runs down the aisle of the factory, you’ll see the distinct shadow of the dollying camera appear on the floor in front of him.)

(And another note, our pre-show and intermission music tonight includes some of the top recording by both George Formby and Gracie Fields.)

NOTE:  Gracie was recognized by her country for her efforts.  The woman who was known simply as “our Gracie” was honored in 1938 with the CBE, the first the first female variety star to receive the decoration.  In 1979, shortly before her death, she became a Dame of the British Empire.

The film, made the same year as It’s Turned Out Nice Again (1941), shows the battering Britain was taking at the time and shows how the British were able to continue turning out films to make people laugh..at a time when the country itself had little to laugh about.

It’s a promotion for American donations to the “Tea Car Project” undertaken by the YMCA, and has a prologue by Wendell Wilkie.