Toronto Film Society presented Lost Horizon (1937) on Sunday, September 25, 1983 in a double bill with I Am A Fugitive From A Chain Gang (1932) as part of the Season 36 Sunday Afternoon Film Buffs Series “A”, Programme 1.

We are opening our new season of Film Buff films with two of the most famous of 1930s films, Lost Horizon and I Am a Fugitive From a Chain Gang.  The latter film, from 1932, was one of Warner Brothers’ noted social problem films, an up-to-date, grimly realistic account of the forgotten man at the nadir of the Depression.  By the time of Lost Horizon in 1937, the Depression had eased enough for Columbia to release Frank Capra’s beloved version of James Hilton’s tale of Shangri-La.

By 1936, Frank Capra was at the top of his profession: It Happened One Night had swept the Oscars for 1934, and the recently released Mr. Deeds Goes to Town was to become one of 1936’s best loved and most popular films–and would win Capra his second Best Director Oscar; a third ensued for You Can’t Take It With You in 1938–three Best Director and two Best Picture Oscars in  5 years, an accomplishment never duplicated.  It Happened One Night and Mr. Deeds Goes to Town both implied that the common man would inherit the earth; Lost Horizon provided a heaven on earth where wealth mattered little.

Lost Horizon cost $2.5 million to produce (about six times the average Columbia “A” feature) and was an enormous popular success, although critically it has had a less certain fate.  Both The New York Times and Variety raved, citing the picture as easily one of the best of the year.  It was nominated for 7 Oscars, including Best Picture, and won 2 Academy Awards.  But contemporary critics, such as Otis Ferguson and Alistair Cooke, were critical of the direction of Capra’s post 1936 movies, noting that ‘he’s started making movies about themes instead of people’.  Recent writers on Capra’s films have tended to echo Ferguson’s and Cooke’s views, emphasizing the lack of struggle and conflict in the Lost Horizon story as a prime weakness.  Nevertheless, we feel that audiences of all eras will never fail to be moved by the story and the quality of the performances of the remarkable cast.

The casting and portrayal of the High Lama of Sam Jaffe has also proved controversial, with reviewers critical of Jaffe’s make-up and real age (38).  It is interesting to note that Capra’s first choice was to find some very old and forgotten stage star whose face had never been filmed.  Capra found one in a ninety-year old ex-stage star, A.E. Anson, who was brought in for a photographic test reading one of the High Lama’s speeches to Ronald Colman.  When Capra and crew viewed the test the next day, they thought Anson was perfect, especially with no make-up, and phoned his home.  The housekeeper answered and told the old actor of his success.  An hour later, the housekeeper phoned back Capra with the news that A.E. Anson had died right after hearing of his casting!  The next candidate for the High Lama role was Henry B. Walthall, star of The Birth of a Nation, but he died before Capra could test him.  Sam Jaffe was then tested.  He survived and got the part!

Lost Horizon commenced filming on March 23, 1936, and was released in New York on March 3, 1937.  After completing the film, Capra previewed it in Santa Barbara in November of 1936 to disastrous results–the audience tittered and laughed at all the wrong places, especially the beginning of the picture.  Capra spent two nights pondering why the picture failed before a large audience while a small studio group had hailed it as a masterpiece.  He then hit upon the solution of junking the first two reels of the picture, and taking the main title from the beginning of the first reel and splicing it onto the beginning of the third reel, with no other changes, making the picture about 20 minutes shorter.  The next preview was a grand success. 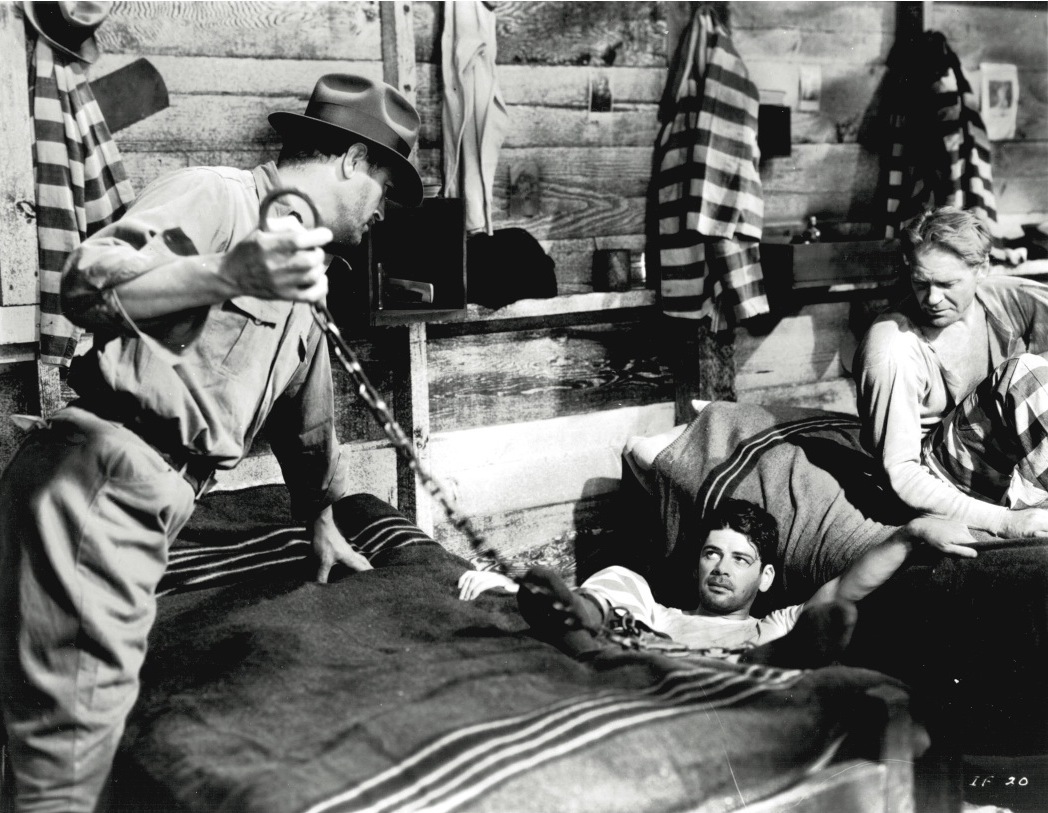 I Am a Fugitive From a Chain Gang had a strong impact on initial release, apparently influencing several changes in America’s prison system, and, unlike Lost Horizon, has continued to enjoy solid critical support through the fifty-one years since it was first screened.  The story and characters of Lost Horizon are so familiar to all–we cannot imagine any of our audience not seeing the film on its many TV revivals at least–that we felt it was unnecessary to go into any detail regarding the fantasy.  But I Am a Fugitive From a Chain Gang has rarely been screened on TV–as have very few Warner Brothers films of 1930-1935 other than The Public Enemy and Little Caesar and the famous musicals–that the film warrants some discussion.

I Am a Fugitive From a Chain Gang charted the course of the forgotten man, from war hero to hobo to criminal fugitive, and was structured as a min-history of America from 1918 to the Depression.  The brilliant last scene, where Muni, as Jim Allen, when asked by his girl friend how he manages to live, with no job and on the lam, replies in total darkness, “I steal”–remains one of the highlights of thirties’ cinema.  Director LeRoy writes in his autobiography that the scene developed by accident.  When they were doing the last rehearsal, just before they went into a take, the fuse on the big klieg lights blew out just as Muni said, “I Steal”.  LeRoy recongnized that the accidental blackout added another dimension to the whole film, and subsequently shot the take in darkness, although deciding to add the darkness gradually with lights dimming rather than with a sudden blackout.

The film was based on an autobiography by Robert E. Burns(a pseudonym), “I Am a Fugitive From a Georgia Chain Gang”, with Georgia being omitted from the film title to avoid legal problems.  Burns was a technical advisor on the film, and had to be secretly smuggled into California, as the state had an extradition agreement with Georgia, to help write the screenplay.  Burns served in a Georgia prison camp as the result of being convicted of a five-dollar grocery story robbery.  After escaping in 1922, he went to Chicago and became a writer, and later, editor, of a magazine.  When his ex-wife revealed his identity, Burns was returned to Georgia.  After escaping a second time, he went to New Jersey to become a tax expert, and wrote the book on which this film was based.  Georgia again demanded his return, but three successive governors of New Jersey refused to extradite him.  Burns finally returned to Georgia tin 1945, when the governor of Georgia had already abolished the state’s chain gang system.  Burns had his sentence commuted; he died in 1955.

The picture was nominated for 3 Oscars, including Best Picture and Best Actor.  It was the second of Muni’s five Oscar nominations.  He was nominated for his first film, The Valiant, in 1929; and also for The Story of Louis Pasteur (he won in 1936); The Life of Emile Zola in 1937; and The Last Angry Man in 1959.