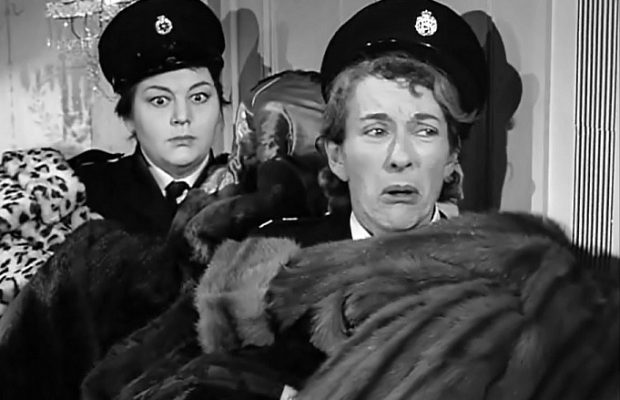 Toronto Film Society presented Make Mine Mink (1960) on Monday, January 30, 1989 in a double bill with Spare a Copper as part of the Season 41 Monday Evening Film Buffs Series “C”, Programme 4.

One of the many fine performances by Terry-Thomas, Make Mine Mink focuses on the blundering excursions into crime of a bunch of pin-head amateurs who specialize in lifting valuable furs and devoting their loot to charity.  (Thomas, the gap-toothed comedian, would hardly appear dashing in a green Robin Hood suit, but you get the idea…)  Dame Beatrice Appleby (Athene Seyler) takes in lodgers to help out her income, and also to provide money for her charitable work.  The idea of crime comes to her when she is able to safely return a fur which has been given to her as a present by her devoted maid (Billie Whitelaw), a reformed thief who is now going steady with a policeman.  The logic is simple (?)…  “If stolen goods can be returned easily, they should be able to be lifted just as safely”.

The “gang” includes Terry-Thomas, a retired officer who plans the raids along strictly military lines, a daffy spinster (Elspeth Duxbury), and Hattie Jacques, the heavy-weight teacher of deportment.  And, by sheer luck rather than judgement, the gang becomes successful.

The plot is hardly a new one in the history of British film comedy, and, in fact, taking into account some of the veteran players, some of the situations can almost be anticipated.  But, when the faces and the actions are on the screen in front of you, the anticipation becomes part of the fun.

Veteran New York Times reporter, Bosley Crowther came up with one of the best descriptions possible of what happens when he noted: “As implausibly broad as is the cleavage between Terry-Thomas’ two front teeth, is the brand of humour in (this film).  But it is the sort that Terrible Terry can sink his choppers into and chew, with the dental drive and diligence of a beaver.”  The film obviously has its roots in The Ladykillers, The Lavender Hill Mob and The Green Man.

Terry-Thomas was born Thomas Terry Hoar-Stevens in 1911, and in the mid-50s replaced Sir C. Aubrey Smith, and others, as the “typical” Englishman in films.  His timing was right, as most of the very funny comic eccentrics had gone, leaving people such as Terry-Thomas and Margaret Rutherford to fill the void, especially in support of American players.  He had worked for a time as a buyer for a grocery firm, then drifted into film as an extra.  In 1938 he began radio appearances, and became one of the so-called “Stars in Battledress” during the Second World War.  At the end of the war, he moved to the stage, supporting Sid Field in the West End revue “Piccadilly Hayride”.  It was then back to radio, and later his own television programme.  Although he had a small part in the 1949 film Helter Skelter, his real film debut was in the 1956 Private’s Progress.  He was one of the hotel guests in The Green Man, and moved on from that point. Other early successes included The Naked Truth, Brothers-in-Law, and Blue Murder at St. Trinian’s.  He made his mark in Hollywood in Bachelor Flat.  Asked at one time why he did so many small parts in film, Therry-Thomas replied: “I don’t have time for big ones.”

Director Robert Asher started his career behind the camera with Follow a Star (1959) and was also the director on A Stitch in Time (1963) and The Intelligence Men (1965) and others.  With his brother, Jack Asher wrote, produced and directed Shell Have To Go (1961).