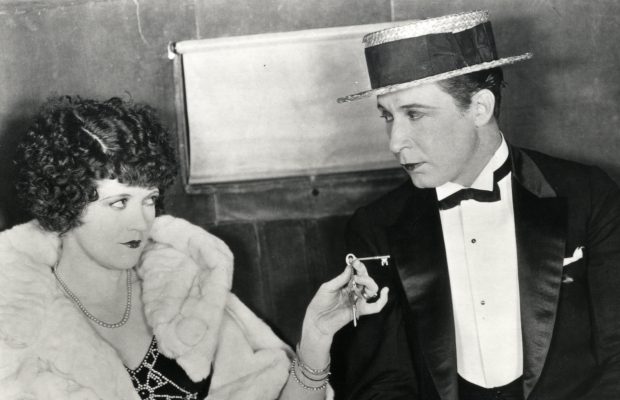 Toronto Film Society presented The Marriage Circle (1924) on Monday, April 14, 1958 in a double bill with Are Parents People? as part of the Season 10 Monday Evening Silent Film Series, Programme 6.

Ernst Lubitsch gained his first fame in Germany as a maker of “humanized” historical spectacles with a dash of earthy humor (e.g. Passion [DuBarry])–and in later years tackled, usually with success, everything from heavy drama (The Patriot, The Man I Killed) to stylish musicals (Love Parade, Monte Carlo, Smiling Lieutenant).  But on his arrival in America in the early ’20’s he specialized in a series of sly, sophisticated drawing-room comedies, the first of which was The Marriage Circle.  Others were Lady Windermere’s Fan, Kiss Me Again, Three Women, So This is Paris and Pola Negri’s Forbidden Paradise.

Paul Rotha in The Film Till Now wrote: “A school of light domestic comedy, displaying a nicety of wit and intelligence, had developed, to be carried eventually to as high a degree of perfection as this lighter side of film allowed.  It had its origin in Chaplin’s memorable satire A Woman of Paris (1923) as well as in Lubitsch’s brilliantly handled The Marriage Circle made in the following year.  It was probably the result of a fusion between the existing school of Hollywood bedroom farce and the imported European talent, the latter being exemplified primarily by Lubitsch.  The Marriage Circle was a witty, superficial, amusing, intimate commentary on modern life in Vienna and Paris, as Hollywood conceived them.”

Lewis Jacobs in The Rise of the American Film says: “Lubitsch’s American comedies all had the common distinction of sophistication, nonchalance, and a new kind of elegance and wit.  They achieved the film equivalent of an epigram, stemming from Lubitsh’s reading of Wilde and Shaw.  Of these The Marriage Circle won the most acclaim and was seriously compared to Arthur Schnitzler’s works.”

Theodore Huff in his Index to the Films of Ernst Lubitsch: “His social comedies were highly successful both artistically and financially, making his name almost a household word.  With subtlety and a Cotinental flavor–Lubitsch introduced or crystallized a new attitude toward sex.  No longer was the instict expressed as a mysterious force, a grand ecstatic passion, or an ennobling spiritual sentiment, but simply as a pleasant pastime.  He playfully and unemotionally satirized the taking of the sex emotion seriously.  In The Marriage Circle it was the first time on the screen that a ‘quadrangle’ plot had been told in a straightforward and casual manner, in the past such marital mixups having been treated either as heavy melodramas or farce comedies. If today this film seems a little tame and slow, it should be remembered that what was then new has been absorbed into the general technique of picture-making; what was then skating on thin ice is now accepted as a matter of course.  However, the picture, though lacking the depth and irony of Chaplin’s A Woman of Paris, had a greater influence.  It started a whole school of light sex comedies, and inspired such young directors as Mal St. Clair, Monta Bell, Harry D’Arrast, etc.”

Herman G. Weinberg says: “‘Lubitsch touches’ were the flowering of an authentic cinema language, and in him derived from a skepticism about the human animal.  They were usually biologic, because sex made Lubitsch laugh harder than anything else.”

Lubitsch himself said: “One shouldn’t single out ‘touches’.  They’re part of a whole.  The camera should comment, insinuate, make an epigram or a bon mot, as well as tell a story.  We’re telling stories with pictures, so we must try to make the pictures as expressive as we can.”

Theodore Huff: “The ‘Lubitsch touch’ can be defined as a swift innuendo or rapier-like comment, accomplished pictorially by a brief camera shot of telling action, to convey an idea or suggestion in a manner impossible in words.  Speaking of the effects for which he is famous, this director said: ‘I let the audiences use their imagination.  Can I help it if they misconstrue my suggestions?’  In this 1923-26 series, he relied on little gestures, facial expressions, unusual camera angles, and a straightforward simplicity to tell the story.  Under his direction the players revealed an ability, vivaciousness and spontaneity never before shown, the director himself often showing them how to perform a scene.  He simplified backgrounds in order to concentrate on the players and the action.  He also used a minimum of titles, The Marriage Circle having less than half the average in a silent feature.  He depended on pantomime and clever use of the camera to put his stories over.  The very limitations of the silent medium and of the American censorship actually seemed to inspire him to circumvent both with an uncanny skill in portraying exactly what he wanted to portray.”

END OF SEASON QUESTIONNAIRE:  What film or films of the 1957-58 season did you like best?

The following silent features are under consideration for next season’s programme.  Please check those you would prefer to see.

Kindly leave after the show, or mail to G.G. Patterson, 10 Bowden Street, Toronto.