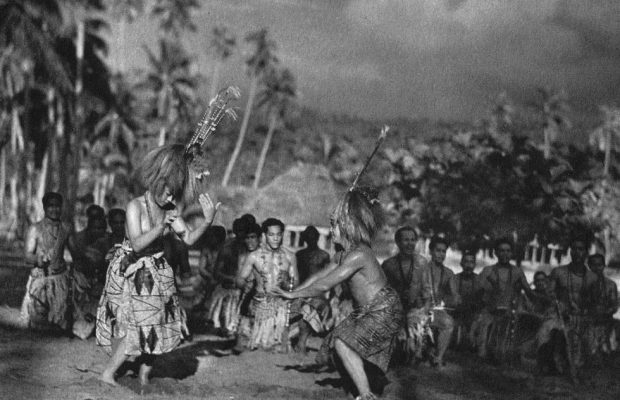 Toronto Film Society presented Moana (1926) on Monday, March 28, 1960 in a double bill with Nanook of the North as part of the Season 12 Monday Evening Silent Film Series, Programme 5.

The films made by that unique artist Robert Flaherty have always represented something pretty special to me–so “special” indeed that in the days of my youth in Winnipeg one was lucky to get to see them at all!  I recall reading about the legendary Nanook for something like a year and wondering if it would ever come to town, when finally it turned up at a lowly “action house” that normally featured the less estimable variety of Western or thriller.  It was an enthralling experience, but disappeared after a week and was never heard of again in our prairie city. Moana did arrive a little more promptly, this time at a more reputable (but still not “de luxe”) theatre, but the powers-that-be evidently feared to present it on its own, so it shared a double bill (then an almost unheard-of institution) with something called Waking Up the Town, Jack Pickford’s last movie and one of Norma Shearer’s first.  I had read reports of Ontario censors having insisted on covering the torso of Moana‘s heroine by some technical means, and so approached the film with certain misgivings.  Fortunately the Manitoba authorities (not always so reasonable) saw nothing untoward in the lady’s mode of attire; and altogether Moana was such a rare treat, such a fresh experience in comparison with other films of the time, and so delighted and impressed me that I could hardly wait to see it again.  As it happened I actually got the chance–it had one second-run showing at a small neighborhood house–this time with Richard Dix in Womanhandled.  I brought a friend and made another Flaherty convert (though he did rather annoy me, during one especially slow, poetic scene, by saying “the greatest melodrama of the year–eh boy?”!).  The first Flahertys of the sound era also appeared on double bills, but in a big theatre!–Elephant Boy (if only that had been all Flaherty instead of part Zoltan Korda!) and Age of Aran.  Those were the last until Louisiana Story briefly but happily appeared at the International Cinema here after the war. Thanks to film societies I’ve been able since then to see and re-see them all to my heart’s content.

Flaherty was now a professional film producer, but his working methods remained uniquely his own.  He chose the Samoan island of Safune because of its large cave with a spring of cold water, where he could develop his negative, and settled his family there–not because it necessarily takes long to make a film, but because understanding a country and its people may be a matter of years.  The wisdom of using this method was soon proved.  Flaherty had not really expected to make “another Nanook” in Polynesia, but he did look for the lements of conflict and struggle which his previous film had taught him were essential to the dramatization of real life.  At first his search was long and fruitless, for Safune afforded no filmable fight for food and shelter.  The Flahertys perforce decided that their picture must record “fa’a-Samoa”, the complex weave of custom, ceremony and tabu which forms the social texture of Samoan life.  In this adhering to the truth of he locale, Flaherty found his dramatic conflict after all, when he showed that Samoans, free from the painful struggle with nature, invented pain to demonstrate their manhood: the climax of Moana is the ritual of the Tattoo.  Moana was one of the first pictures to be photographed entirely on panchromatic stock, and was hailed by critics as a beauty-drenched poem.  But it was not quite as popular as Nanook; distributors complained that it was “hard to sell”, by which they meant, as Flaherty points out, that conventional selling methods could not be applied to an unconventional film.  At any rate, Flaherty now experienced increasing difficulties with his backers. He relinquished the direction of MGM’s White Shadows in the South Seas to W.S. Van Dyke and a projected film of New Mexico was abandoned before it was well started.  Eventually he found sympathetic sponsorship, but the gaps between his films have continued to be long.  Although his films were form the first hailed as educational, the picture of primitive life they present has at no time been free from criticism.  The explorer Vilhjalmur Stefansson rather sharply points out that Nanook may have been a true picture of the way an Eskimo of a hundred years ago fed, clothed and sheltered himself, but that it had little to do with contemporary aborigines who stay close to trading-posts, eat white man’s food, and use guns to kill the animals whose pelts they sell.  Similarly, Flaherty’s argument that the tattoo ceremony of Moana was invented by the Polynesians to prevent their race from going soft is doubtful anthropology.  So it goes through the more recent films: the spectator’s reaction to Man of Aran (1934) becomes complex when he learns that the Aran Islands possess electric light; and Elephant Boy (1937) though made on actual location, is almost wholly in the spirit of the studio film.  The British documentary film-makers, who at first hailed Flaherty as pioneer (Grierson first applied the word “documentary” in a review of Moana), found themselves shortly criticizing his films for their lack of social direction.  It was for awhile the fashion to damn Flaherty as a visionary, a romantic.  Time has altered the impeachment.  It is true that Flaherty cares little for social or economic problems, that his films are usually re-enactments by primitive peoples of the customs of their fathers, and that even these reconstructions are highly idealized.  But Flaherty’s superb technique of camera observation, his method of digging himself into a locale until he knows it, his ability to “provide his people with the real situations which engaged their affections”, are now safely embedded in general documentary film practice.  And if his films do not, like more recent documentaries, struggle toward the future, but rather point the way of escape into a past he loves, they perform this sometimes precious function with a magical sureness to which no other film director has ever pretended.

In another set of Film Notes (published ten years later) the MMA says; with a somewhat different emphasis:

Mast of the fact film, Robert Flaherty and his work has exerted greater influence on film-makers and film connoisseurs than any other director save D.W. Griffith.  “He takes us to far places, not impersonally as in a travelogue, but intimately and warmheartedly.  Without making us conscious that he dramatizes the people he finds there, he draws us into their lives.”  The body of his work deserves the closest scrutiny by students of communications: to date, it most closely realizes the promise of the motion picture as an international and intercultural language of the eye. (Of Moana they say “a film of the inner meaning, in traditional Samoan culture, of such everyday pursuits as hunting, fishing, feasting, dancing, and the ritual of the Tattoo.  The sensitive and seemingly artless organization of this film deserves prolonged study.”

Other films by Robert Flaherty:

The Land (1942), made for the Agricultural Adjustment Agency (5 reels); a rather neglected and abandoned Flaherty film–an interesting departure for him, in some respects (but by no means all) uncharacteristic.