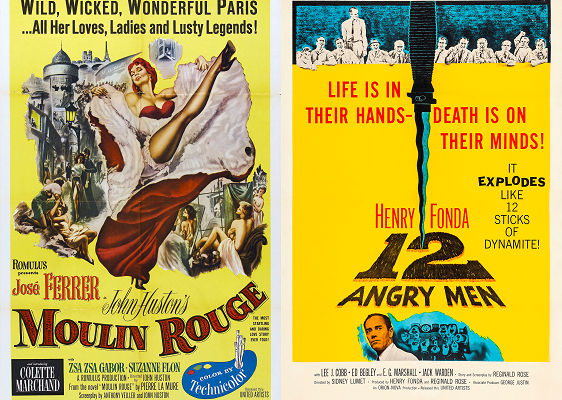 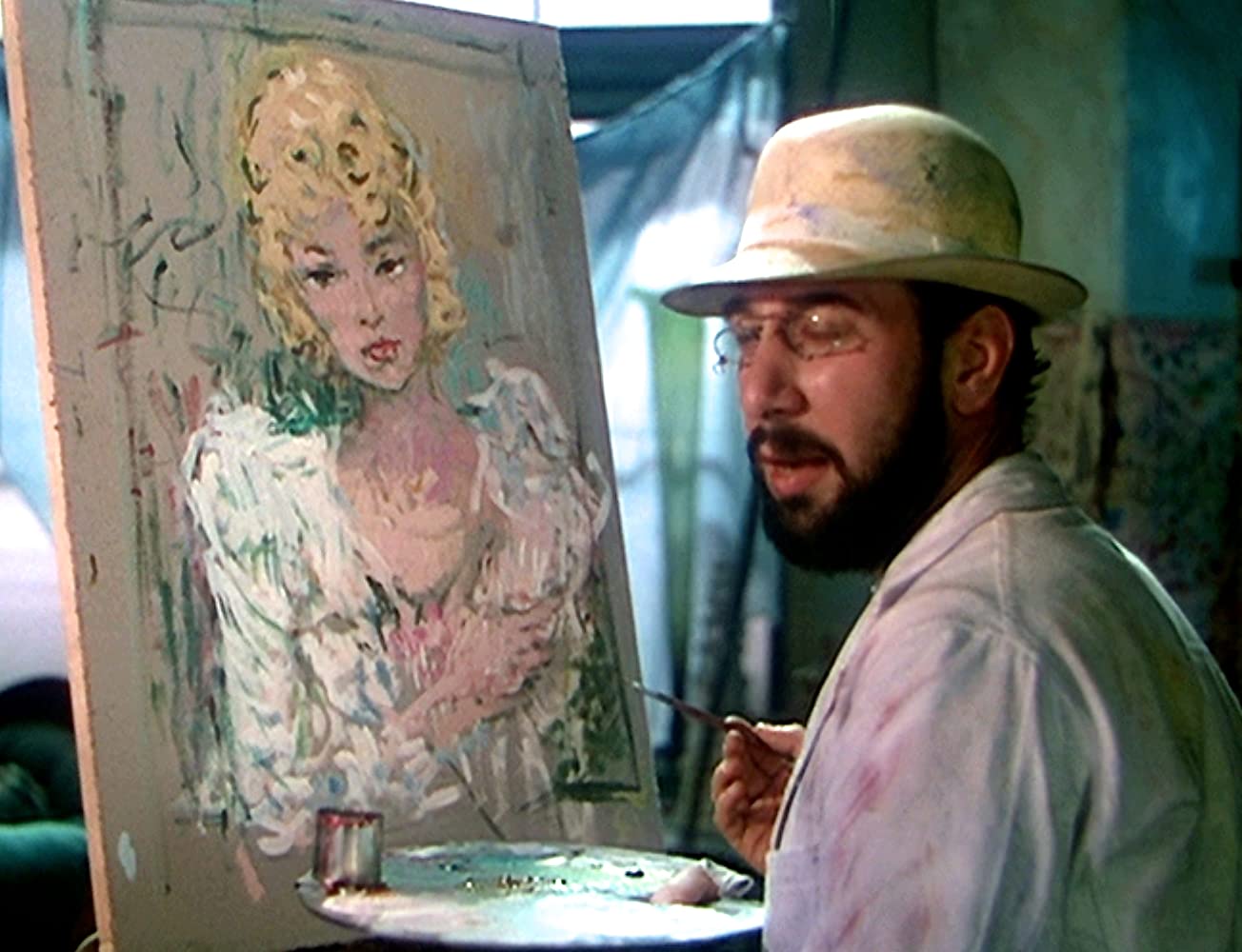 The 1950s was the decade in which the small television screen made its first major impact on the big motion-picture screen, which with Cinemascope was getting begger than ever.  These two films, made five years apart in that decade, represent the polarities.  Moulin Rouge is a large-scale production which makes full (and innovative) use of opulent colour, a big-budget film produced as well as directed by a highly successful director at the peak of his career, and panoramic in its view of Paris in the belle epoque.  Twelve Angry Men is transcribed almost directly from television, is produced by its wealthy and successful star, and its camera is confined–though mobile in its use of close shots–to a small room in a dingy city courthouse.  But it is the first film of a director who along with many others from the rival medium–Delbert Mann, Frankenheimer, Ritt, Schaffner–would transform the film industry over the next ten years.  The ’50s was a decade more than mildly afflicted with elephantiasis (The Greatest Show on Earth, The Bridge on the River Kwai), but it was also the decade of Marty, The Bachelor Party, Fear Strikes Out and Twelve Angry Men.

The two films also revolve around radically different central figures.  Huston’s heroes, from The Maltese Falcon to Wise Blood, have often been self-deceivers, people in disguise, in flight from themselves.  Lumet’s heroes, from this beginning, through Network to Daniel, have been either men of social conscience, seeking to right wrong, or themselves the victims of the social wrong.

Thus Moulin Rouge shows its hero transforming his world through art; and Twelve Angry Men shows its hero transforming his through persuasion.  Moulin Rouge is set in a world of art, and its colour (which we can only hope looks as good thirty years later) attempts to capture the essence of Toulouse-Lautrec’s (“We were after a tonal range which would correspond to oil paint,” Huston has said; and the effect is brilliantly achieved by a combination of filter and smoke).  Lumet’s film is determinedly black and white, and the emphasis is less visual than polemical.  The script was written by Reginald Rose, based on his television play of 1954, and its leterate tone carries the film.  (Imagine Twelve Angry Men silent!)

Though overshadowed by the colour, and the vitality of the Can-Can, Jose Ferrer’s performance is almost the human entirety of Moulin Rouge; Zsa Zsa and the others are the merest appendages, symbolic figures pulling him towards good or evil.  In 1952 Ferrer had twenty years of primarily stage acting behind him, having played Iago opposite Paul Robeson’s Othello on Broadway, and Cyrano de Bergerac on screen, a role which brought him the Oscar for Best Actor of 1950.  His virtuoso performance as the dwarf French impressionist painter of the Moulin Rouge, an excruciating performance, since he had to have his lower legs strapped up behind his thighs, and so walked on his knees through much of the film, brought him still wider fame. To this day he has remained an important screen actor (The Caine Mutiny, Ship of Fools, Fedora), but he has never again so dominated a film as in these two early performances.

In Twelve Angry Men, not even Henry Fonda so dominated the film, and there is a fine discrimination in the etching of the various and distinct types who make up the jury: the man eager to get it over with so he can get to the ballgame; the meticulous man insistent that the accused is guilty on the evidence; the man with the delinquent son who is determined to punish the delinquent defendant; the man of racial prejudice who hates the “them” the defendant represents.  And the subtle etching is done by a group of actors rather than stars, most of them having come to the film from stage or television: Lee J. Cobb had been making films for twenty years, but his best remembered role had been on Broadway, as the original Willy Loman; Ed Begley had been in films for ten years, playing mostly irascible bosses (Sitting Pretty, Deadline USA), but was still remembered for originating on the stage another Arthur Miller hero, in All My Sons.  And E.G. Marshall, Martin Balsam, Robert Webber, Jack Warden, Jack Klugman, George Voscovec, were all associated with stage, Actors’ Studio, or TV at this point in their careers.  Indeed, several of them remain indelibly linked with television series made since: Marshall with The Defenders, Klugman with The Odd Couple and Quincy, Voscovec with the short-lived Nero Wolfe of three seasons ago.

Huston’s film is, like LaMure’s novel, less of a biography than a fictional recreation of the Paris of Impressionism, “a creation,” as Bosley Crowther noted, “that quite o’ershados the famous painter’s poster art.”  But if Huston has often been concerned with the world as fiction, Lumet has as often been concerned with it as fact.  He has been, as a reviewer said of Reginald Rose, “Too obviously on the side of right (as if we always knew what right is).”  His concern that proof of guilt should be beyond a reasonable doubt (a well established legal concept ironically queried in Fritz Lang’s last American film, the year before) stretches the concept to its limit.  As good old Hank strides through the columns of justice, down the steps, and disappears into the urban anonymity (perhaps to sympathise over the dinner-table with an adolescent Jane’s latest run-in with her fascist teacher), one may have the sense here of a miscarriage of justice.  Or at least a question sidestepped.

Both these films figured prominently at the Oscar ceremonies of their years.  Moulin Rouge, Huston and Ferrer were all nominated, though losing to The Greatest Show on Earth, John Ford (The Quiet Man), and Gary Cooper (High Noon).  The picture did win Academy Awards for Art direction and costume design.  Twelve Angry Men, though winning no awards, was nominated for Best Picture, Best Script and Best Director.  It lost in all three categories to The Bridge on the River Kwai.  But the triumph of television was only postponed.