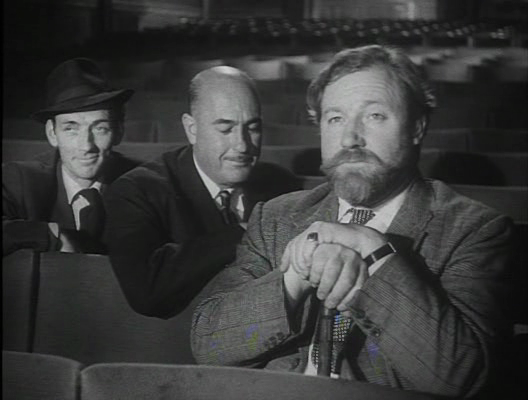 Toronto Film Society presented Murder Will Out [The Voice of Merrill] (1952) on Monday, April 3, 1989 in a double bill with Calling Bulldog Drummond as part of the Season 41 Monday Evening Film Buffs Series “C”, Programme 6.

A case of murder, articulately and suspensefully told as only the British filmmaker could in the 1950’s, Murder Will Out is one of the seldom seen minor productions which showcased the talents of the likes of Valerie Hobson, James Robertson Justice and the largely unknown Edward Underdown.  The story, described by the New York Times reviewer as “another slickly calculated ‘whodunit'”, involves the things of which good mysteries are made: insinuating suspicions, mounting passions, a search for a murderer and a love affair between two of the principals.  The red herrings appear everywhere in the complex, articulate plot.  Valerie Hobson is the beautiful wife of James Robertson Justice, a literary celebrity of doubtful manners and (with Justice in the role) what else but a decidedly acid personality.  She falls in love with Edward Underdown, an unsuccessful writer of mystery stories. The interesting off-beat part of the story revolves around the British Broadcasting Corporation and broadcasters of stories written by the noted but little-loved mate, Justice. 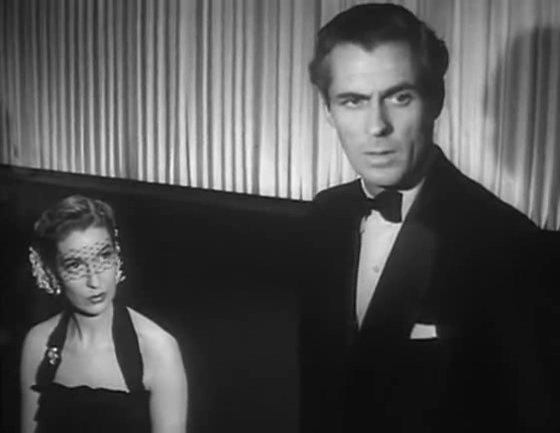 Of the performances, the New York Times notes: “Hobson is beautiful and sensitive as the badgered wife, a lady who finds that the wages of sin are unchanging.  Justice is excellent in the role of the explosively articulate husband, while Underdown is largely placid as the third man in the triangle.  The film offers interesting location shooting in the BBC C. Studios of the early 1950’s.

Valerie Hobson was born in Larne, Northern Ireland in 1917.  She entered films at the age of 16, shortly after making her debut on the London stage.  She was invited to Hollywood in 1935, but returned home a year later, after playing leads in a number of horror and thriller films such as Bride of Frankenstein, The Werewolf of London and The Mystery of Edwin Drood.  Back at home, she developed into one of the prime leading ladies of the British screen…gentle, graceful and elegant, the personification of the English lady.

In 1939, she married Anthony Havelock-Allan, the producer of several of her films.  They divorced in 1952 and she retired from films in 1954, after what turned out to be a marriage soon shrouded in controversy and gossip-column fodder, to politician John Profumo.  She stood faithfully by her husband during the famous Christine Keeler sex scandal, which toppled the British cabinet in 1963, with Profumo a central figure.  Some of her key roles included This Man is News (1938), Great Expectations (as Estella in 1946, Kind Hearts and Coronets (1949).

James Robertson Justice was born James Norval Harald Robertson-Justice in 1905 in Wigtown Scotland.  The luxuriant beard and booming voice became familiar in many British and American film productions starting in the 1940’s until his death in 1975.  He is perhaps best remembered as the irascible senior surgeon in the British “Doctor” series, beginning with Doctor in the House in 1954.  Robertson-Justice was the holder of a Ph.D. degree and was a former journalist and naturalist.  He became an expert in falconry, and trained Prince Charles in the ancient hunting art.  He was almost 40 in his film debut in For Those in Peril (1944).  Other key roles included Scott of the Antarctic (1948), Tight Little Island (1949), Captain Horatio Hornblower (1951), The Story of Robin Hood (as Little John in 1952), Rob Roy (1953), Moby Dick (1956), The Guns of Navarone (1961), Chitty Chitty Bang Bang (1968).

Edward Underdown who plays the role of Hugh Allen, the mediocre writer who becomes involved in a scheme which was not of his making, is another of the long string of British actors who moved from stage to screen in a host of films.  The films in which he played were, like his part in this film, mostly mediocre.  Underdown was born in 1908, was known best as a “thin” leading man, who prior to his stage and screen career, was a jockey.

Underdown entered the film world in 1932 and continued to perform well in the 1970’s.  His first film was Girls Please in 1934.  One of his earliest notable performances was in the 1937 production of Wings of the Morning, with Henry Fonda, Annabella and Leslie Banks.  In 1939, he appeared with Gordon Harker and Alastair Sim in the first of the Inspector Hornleigh films, based on the popular radio drama.

A key role came in 1950, when he played “Phillip” in They Were Not Divided, directed by Terence Young.  In 1953, Underdown portrayed Harry Chelm, in the off-beat John Huston film Beat the Devil, which starred Humphrey Bogart, Jennifer Jones, Gina Lollobrigida, Robert Morley and Peter Lorre.  He had a small role in one of the most underrated and almost forgotten science-fiction films of the 1960’s, The Day the Earth Caught Fire, with Janet Munro, Leo McKern and Edward Judd, directed by Val Guest.  later appearances included Thunderball (1965), Khartoum (1966), The Magic Christian (1970), Running Scared (1972), and the ‘never to be forgotten’, Digby, the Biggest Dog in the World (1973).

Director John Gilling is described by Halliwell as “a man who churned out dozens of pot-boilers” in his years in film.  This may well be classed as a pot-boiler, however the pot is made of the finest quality stainless steel tonight.  Gilling was born in England in 1912, entering British films in 1933 as assistant director.  After service in World War II and service with the Royal Navy, he began writing scripts.  He made his debut as director in 1948, turning out man low to medium budget thrillers and adventure pictures.  He continued to write screenplays for his own films, as well as for those of others.