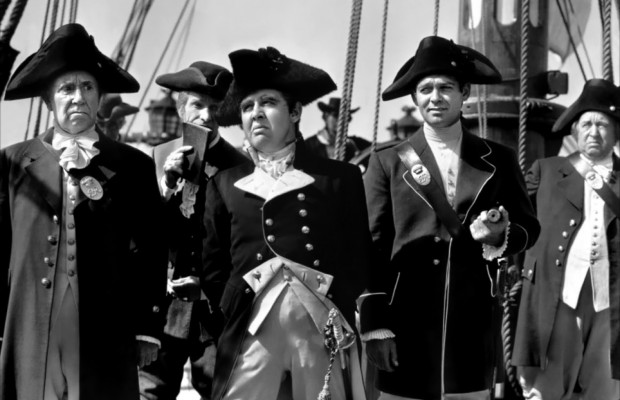 Toronto Film Society presented Mutiny on the Bounty (1935) on Monday, February 2, 1981 in a double bill with Grand Hotel as part of the Season 33 Monday Evening Film Buff Series, Programme 6.

“In the long and crowded gallery of memorable portrayals on the screen, none stands out more clearly than that of Charles Laughton’s Captain Bligh in Frank Lloyd’s Mutiny on the Bounty.  In this enactment of the most famous naval mutiny in all history, Mr. Laughton gave an inspired performance of the British captain’s inhumanity, of despotism beyond all reason, and of incredible cruelty to his crew.  One cannot recall another portrait of a tyrant performing within the limits of his lawful prerogatives, which were those of a sailing ship’s master in the late eighteenth century, to match in energy and detail the exhibit that Mr. Laughton gave of the captain of the Bounty on its historic voyage in the South Seas.  Whether ordering the hideous keelhauling of a poor sailor who had merely besought an extra ration of drinking water, or compelling a master-at-arms to complete the specified flogging of a culprit who had already died beneath the lash, Mr. Laughton was a monument to brutality.  Pacing the deck with his jaw jutted forward like a ship’s prow and his hands clasped firmly behind his back, he looked the evil embodiment of a monster prepared to destroy.  Mr. Laughton’s characterization immortalized the name Bligh far beyond what had been accomplished by the writers of history.  Or by James Norma Hall and Charles Nordhoff, from whose three exciting books–‘Mutiny on the Bounty’, ‘Men Against the Sea’, and ‘Pitcairn’s Island’–this splendid film was derived.”

“From the bare historical truths of a saga of the sea, the greatest maritime film since The Sea Hawk surges with virile force across the screen.  Some of you, however, may miss the customary love interest and a justice-triumphant ending.  For the story of the Bounty’s mutiny–faithfully culled from the Nordhoff-Hall book, is a brutal, sweat-and-blood tale of man’s inhumanity to man, and its tragic consequences.  It is not a pretty film, but it is grand and real, and so are its characters…A superb sweep of reality distinguishes the entire film, which is finely mounted…”