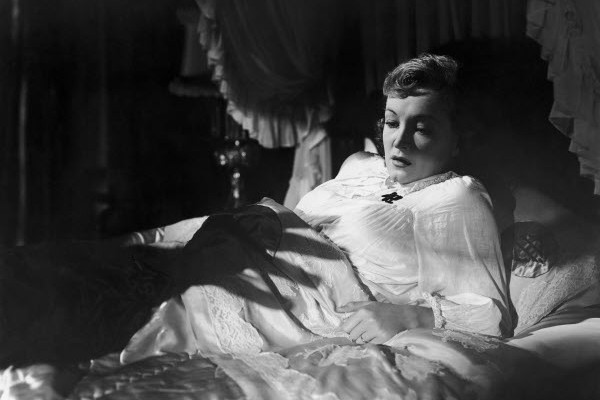 Toronto Film Society presented My Name Is Julia Ross (1945) on Monday, December 13, 1976 in a double bill with  The Moon’s Our Home as part of the Season 29 Monday Evening Film Buff Series, Programme 4.

It would be easy to overrate My Name Is Julia Ross due to its reputation through the years, which would be unfair to the film.

By any standards it’s a superior, well-knit thriller, proceeding at a pace that makes the brief running time seem even briefer.  However, the glowing accolades attributed to it since its initial release would lead the unwary to expect something of a masterpiece, which it most definitely is not.  By the end of World War Two, there was a product shortage caused by the necessary readjustment by Hollywood to peacetime pursuits.  The number of first-run theatres in key cities were hard put to find worthy films; not that there weren’t a goodly number of presentable films, but the number of houses demanding them were greater and nearly exceeded the supply.  When My Name Is Julia Ross was previewed, Columbia executives wisely foresaw the possibilities in advertising it as a ‘sleeper’, that is a film of high merit without cast names of star stature, and its opening engagements were not on the bottom half of a double bill, for which it had been intended, but as a single feature in moderately important showcases.  Fortunately, the reviews lived up to expectations.  With subliminal prodding of the word-of-mouth preceding it, the film obtained resoundingly favourable critical comments, and in one or two instances wound up on the ten-best-of-the-year lists.

The script proceeds without frills or fancies in a manner calculated to maintain maximum interest, and the leading roles are in the more than capable hands of one novice with potential (Foch) and two veteran scene-stealers (Whitty and Macready).  In its disfavour it might be said that the supporting players are no more than adequate at best, while the English background is occasionally open to question; but these drawbacks did little to mar the general effect.

Instead, Lewis emerged with the success of My Name Is Julia Ross, an ambitious baroque exercise that excited critics and audiences alike.  Although of programmer length, the gfilm was clearly budgeted beyond the normal restrictions attendant on a sixty-five minute running time, and Lewis responded with flourish to his expanded resources.  The virtuosity displayed in Secrets of a Co-ed here serves the devious purposes of suspense direction, and since Lewis is working with creditable performers, for the first time in his career a sense of personal relationships comes through with some success.  The film, extraordinary as it is, is not nearly so rich a work as his next film, So Dark the Night (1946), and it suffers from formal deficiencies that are more the fault of an overly contrived script than of Lewis’ very fastidious, deliberate direction.  Lewis’ penchant for shooting through foreground bric-a-brac makes an extensive debut, and the competition between self-conscious awareness and calculated artistry ends in something of a draw.  I prefer to consider awareness and calculated artistry ends in something of a draw.  I prefer to consider Julia Ross a prelude to the complete achievement of the subsequent So Dark the Night, which reveals Lewis at last as a filmmaker of astonishing complexity.

The director and scenarist of the new mystery, My Name Is Julia Ross, deserve a B-plus for effort at least.  It is quite evident that they strived earnestly to whip up excitement and suspense, but somehow that electrifying quality which distinguishes good melodrama is lacking in this transcription of the Anthony Gilbert novel, The Woman in Red.

The elements of a mystifying entertainment with psychological overtones are present in this story about a girl who is engaged as a private secretary by a rich old dame and discovers that her employer plans to driver her crazy and thus cover up evidence of a previous murder.  Julia, you see, is a dead ringer for the victim, and the scheme is to produce her as the corpus delicti.

While Joseph Lewis, the director, succeeds in creating an effectively ominous atmosphere, he has not been as adept in handling the players, and that, we suspect, is why My Name Is Julia Ross misses the mark.  As the frightened heroine, Nina Foch depends chiefly on studied expressions of shock and bewilderment, and she gets only routine support from George Macready and Dame May Whitty.