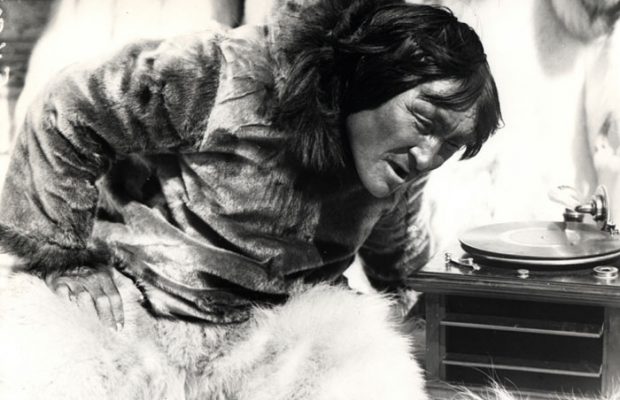 Toronto Film Society presented Nanook of the North (1922) on Monday, March 28, 1960 in a double bill with Moana as part of the Season 12 Monday Evening Silent Film Series, Programme 5.

The films made by that unique artist Robert Flaherty have always represented something pretty special to me–so “special” indeed that in the days of my youth in Winnipeg one was lucky to get to see them at all!  I recall reading about the legendary Nanook for something like a year and wondering if it would ever come to town, when finally it turned up at a lowly “action house” that normally featured the less estimable variety of Western or thriller.  It was an enthralling experience, but disappeared after a week and was never heard of again in our prairie city.  Moana did arrive a little more promptly, this time at a more reputable (but still not “de luxe”) theatre, but the powers-that-be evidently feared to present it on its own, so it shared a double bill (then an almost unheard-of institution) with something called Waking Up the Town, Jack Pickford’s last movie and one of Norma Shearer’s first.  I had read reports of Ontario censors having insisted on covering the torso of Moana‘s heroine by some technical means, and so approached the film with certain misgivings.  Fortunately the Manitoba authorities (not always so reasonable) saw nothing untoward in the lady’s mode of attire; and altogether Moana was such a rare treat, such a fresh experience in comparison with other films of the time, and so delighted and impressed me that I could hardly wait to see it again.  As it happened I actually got the chance–it had one second-run showing at a small neighborhood house–this time with Richard Dix in Womanhandled.  I brought a friend and made another Flaherty convert (though he did rather annoy me, during one especially slow, poetic scene, by saying “the greatest melodrama of the year–eh boy?”!).  The first Flahertys of the sound era also appeared on double bills, but in a big theatre!–Elephant Boy (if only that had been all Flaherty instead of part Zoltan Korda!) and Age of Aran.  Those were the last until Louisiana Story briefly but happily appeared at the International Cinema here after the war. Thanks to film societies I’ve been able since then to see and re-see them all to my heart’s content.

Nanook of the North (1922).  Produced and directed by Robert J. Flaherty, for Revillon Freres. Editing and Titles by Carl Stearns Clancy.

Nanook begins in the old “scenes-around-the-trading-post” manner, and many of its later sequences of hunting, fishing and igloo-building are familiar travelogue material.  But soon it is clear that both the approach and the presentation are new.  The director’s interest is no longer in the way the Eskimos looked, but in how they lived.  That life, as Flaherty had seen it, consisted of an unremitting struggle against hunger and cold.  Therefore he stresses those incidents with illustrate the struggle; as the film progresses, every scene is conflict–between Nanook and the walrus, Nanook and the seal, and finally, in the summatory coda which concludes the film, Nanook and the North.  Second only to this factor of dramatic selection in giving Nanook its emotional appeal is the insight with which Flaherty reveals the behavior of an Eskimo family.  In his definitive article, Flaherty (Cinema Quarterly, Autumn 1932) John Grierson says: “The revelation of feelings, as I gathered it, was seldom, if ever, achieved by the staging of expressions.  The camera was used much more intimately than usual, in the sense that it attended on action rather than had action presented to it.  Flaherty spoke almost mystically of the camera’s capacity for seeing beyond mortal eye to the inner qualities of things.  With Fairbanks, he agrees that children and animals are the finest of all movie actors because they are spontaneous, but talks also of the movements in peasants and craftsmen and hunters and priests as having a special magic on the screen because time or tradition has worn them smooth.  He might also add–though he would not–that his own capacity for moving the camera in appreciation of these movements is an essential part of the magic.  No man of cameras, to my knowledge, ca pan so curiously, or so bewilderingly anticipate a fine gesture or expression”.  These qualities made an immediate impact on film audiences:  Nanook was not only popular throughout the world, but acclaimed as a new and memorable kind of experience–education become drama, reality made as imaginative as fiction.  “Flaherty’s screen is not a stage to which the ation of a story is brought, but rather a magical opening in the theatre wall, through which one may look out to the wide world” (Grierson). Everyone wanted to see more of the world through this magical window, and soon Flaherty was sent by a Hollywood studio to Samoa to film “another Nanook“.