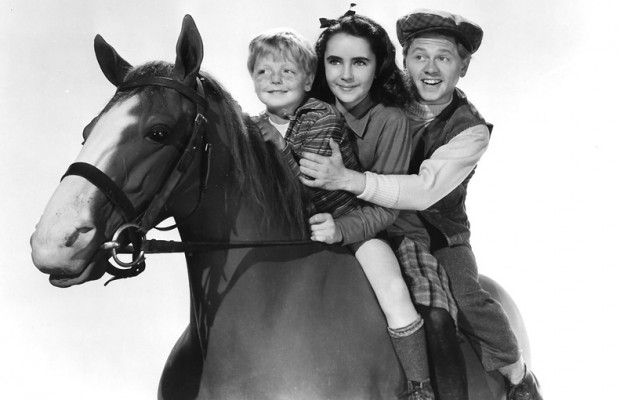 Toronto Film Society presented National Velvet (1945) on Monday, May 25, 1981 in a double bill with The Master of Ballantrae as part of the Season 33 Monday Evening Film Buff Series, Programme 10.

With not only the New York Times but also the New Yorker now raving over Elizabeth Taylor’s performance as the Grand Bitch of the American Theatre, Regina in “The Little Foxes”, it may be interesting to look back nearly 40 years to see what ol’ Bosley had to say of an earlier performance of hers in (on?) a rather different vehicle:

“In the true spirit of Christmas, the Music Hall is showing rare good will not only toward human beings but toward animals in its current bill.  For both the holiday stage show and the new picture, which opened there yesterday, are abundant in sympathy and benevolence toward creatures of two and four legs.  The stage show offers jovial acquaintance with some entertainers in the latter class, and the new film National Velvet, should be a joy to all right-minded folks.  For this fresh and delightful Metro picture, based on Enid Bagnold’s novel of some years back, tells by far the most touching story of youngsters and of animals since Lassie was coming home.

Indeed, in its simple comprehension of the faith and affection of youth it is likely more tender and affecting than even the story of Lassie was.  And it certainly is more exciting in its vivid, dramatic display.  For this tory of two English youngsters, the daughter of a butcher and a youthful vagabond, who train a magnificent sorrel gelding to run in the Grand National Steeplechase, is rich in the gentleness and confidence that only young people truly have.  And it speaks, through the tenderness of children, of the more benevolent spirit that is in man. …

Mr. Brown has also drawn some excellent performances from his cast, especially from little Elizabeth Taylor, who plays the role of the horse-loving girl.  Her face is alive with youthful spirit, her voice has the softness of sweet song and her whole manner in this picture is one of refreshing grace.  Mickey Rooney is also affecting, though somewhat less airily so, as the boy who helps her train her jumper and gains a new and happy outlook thereby.  Anne Revere and Donald Crisp are splendid as the little girl’s mother and dad, and a large cast of other performers creates a genial county air most winningly.  (For folks who like juvenile cuteness there is little Jack Jenkins as the family tike.)

As the mother of Velvet puts it, ‘Everyone should have a chance at a breathtaking piece of folly at least once in his life.’  That chance is now open to anybody who has the price of admission to the Music Hall.