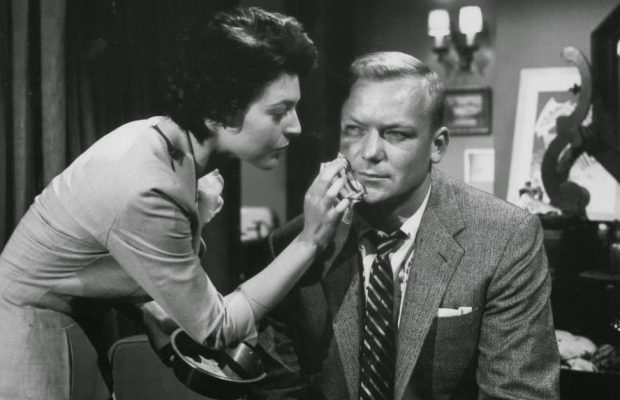 Toronto Film Society presented Nightfall (1956) on Monday, July 22, 2019 in a double bill with Kiss of Death as part of the Season 72 Summer Series, Programme 3.

Toronto Film Society presented Nightfall (1956) on Sunday, November 10, 1991 in a double bill with Ride the Pink Horse as part of the Season 44 Summer Series, Programme 2. 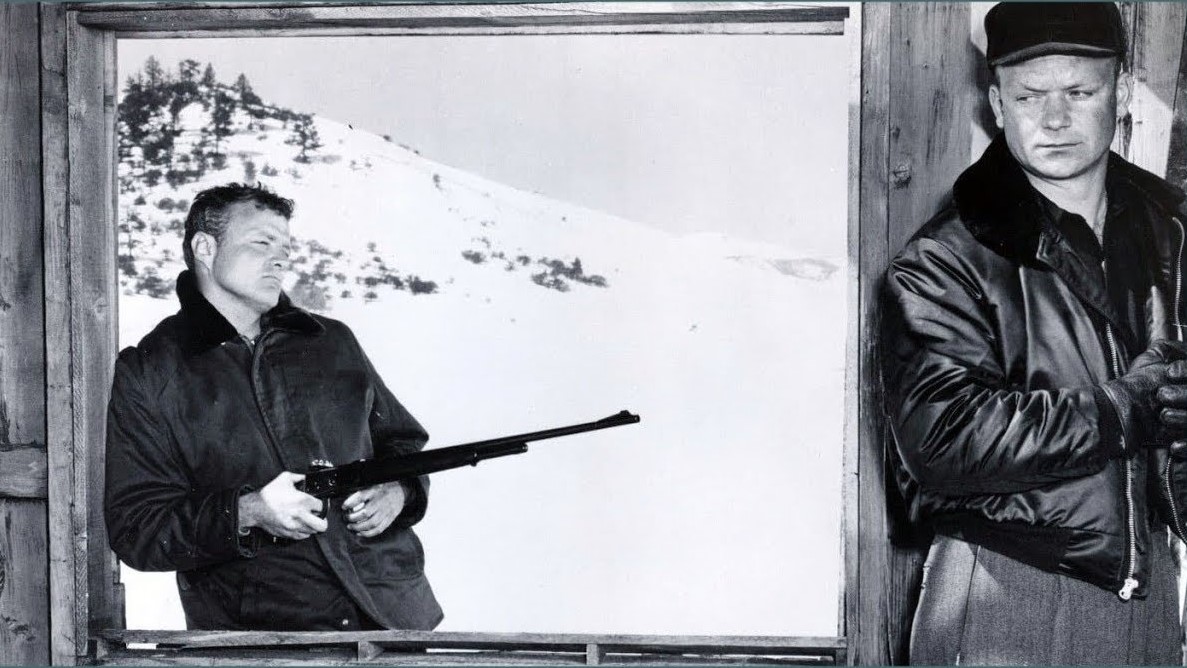 Both of tonight’s films come from studios that are not primarily associated with film noir.  R.K.O, Warner Brothers and Universal seemed to have a monopoly on directors and cameramen who fitted the mold.  M.G.M., for instance, rarely entered the field, sticking mostly to its high-key lighting and sunnier stories.  Kiss of Death was from 20th Century-Fox, better known at the time for Betty Grable musicals and race-track romances like Henry Hathaway’s own Home in Indiana.

Columbia Pictures had seriously entered the world of noir for the first time with the unforgettable Gilda.  After that, the studio used Gilda’s star, Glenn Ford, in a number of noir films like The Big Heat and Human Desire.  These two films had the advantage of the prestigious noir director, Fritz Lang, at the helm.  Nicholas Ray made In a Lonely Place with Bogart for the studio.  But the pantheon noir directors were otherwise absent from Columbia until the studio acquired the services of Jacques Tourneur, the director of the R.K.O. archetypal film noir, Out of the Past.

The son of Maurice Tourneur, the famous silent film director, Jacques Tourneur had been previously under contract at R.K.O. to film creepy films like The Cat People.   His shot-in-studios aesthetics were ideally suited to horror films, and, later, film noir.   But he evolved enough that he filmed part of Out of the Past outdoors on location.  Therefore, by 1956, he was certainly ready to shoot Nightfall in outdoor locations that were indispensable to the story. His experience in film noir also made him comfortable with the film’s flashbacks.

The story here is Hitchcockian, inasmuch as we have an innocent man mistakenly identified as a killer and on the run.  Think of The Thirty-Nine Steps and North by Northwest.  The film even has a McGuffin in the form of 350 grand from a bank robbery.

The author of the source novel, David Goodis, is also the author of a novel used by François Truffaut for Shoot the Piano Player, and of the original screenplay for the Bogart film, Dark Passage.  Goodis is usually listed with Dashiell Hammet and Raymond Chandler among the important writers of noir pulp fiction.

Fog-horn voiced Aldo Ray, a Columbia Pictures contract player, is the lead, in a role that would have been perfect for Glenn Ford.  Anne Bancroft left Hollywood for Broadway at the end of the 1950s because of unchallenging roles like this.  Competent as she is here, you see little possibility for her to play an Oscar-winning role as Annie Sullivan in The Miracle Worker six years later.  There is more of the promise of Mrs. Robinson in The Graduate.  If you want to read a truly bitchy profile of Miss Bancroft, I encourage you to read Frank Langella’s memoirs, called “Dropping Names: Famous Men and Women as I knew them”.

The story of Nightfall, an interesting mystery from the mid-1950s, is a familiar one: an innocent, honest man plunged, by unexpected circumstances, into a nightmare of terror and forced to run for his very life. In this case, Aldo Ray is an artist on holiday in the Wyoming woods with an old friend, a doctor (Broadway star Frank Albertson). They are surprised by a pair of bank robbers who kill the doctor and leave the artist for dead; but, in the excitement, they take the doctor’s medical bag instead of the one containing the loot. Soon, Mr. Ray finds himself not only suspected by the police of robbery and murder, but being pursued by the bank robbers, as well. Flashbacks, a common device of the period but one that is virtually ignored today, are used to piece the story together.

Anne Bancroft, who began her career in programmers in the early-1950s, is a model who helps and loves Mr. Ray. Miss Bancroft’s career soared skyward in 1967 in The Graduate, as the neighbour’s wife, Mrs. Robinson, who seduces the college graduate played by Dustin Hoffman. Brian Keith, whose father, Robert, was also an actor, is laconically effective as the more intelligent of the two robbers, while Rudy Bond is, oddly enough, amusing as his vicious, trigger-happy partner. James Gregory, who played the police detective in 1957’s The Young Stranger (also shown by TFS, in Season 43), has a similar role in this earlier film, as a sympathetic insurance investigator. Jocelyn Brando, of course, is Marlon’s sister. Her screen career was limited to supporting parts, with probably her best-remembered one being as Glenn Ford’s doomed wife in 1953’s The Big Heat. Aldo Ray, a husky, rugged actor, starred in some major pictures in the late-1950s, such as The Naked and the Dead and God’s Little Acre, but never made it to the top. By the early-1960s, his film career was on the wane, and he has since appeared in small roles on television.