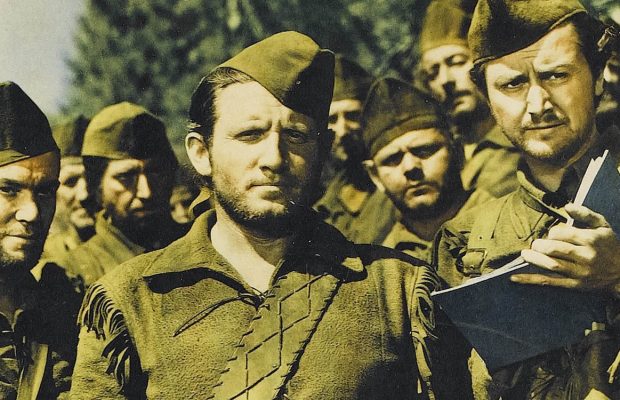 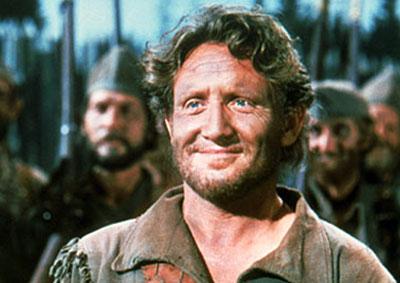 Northwest Passage, is a unique film in that M-G-M originally intended it to be two films.  It was based on historical novelist’s KennethRoberts sprawling account of the life of Major Robert Rogers, a real-life figure in pre-revolutionary America.  Our film tonight covers Book One of Roberts novel.  Although Northwest Passage did well at the box office it had costs so much to produce that M-G-M got cold feet and cancelled the sequel.  This may have been partly due to the lengthy and difficult shooting in the wilds of Idaho (standing in for colonial New York State and Vermont).  M-G-M was at this time the most studio-bound of all Hollywood companies, and must have felt uneasy when a film crew went on lengthy location shooting.

The title of course refers to Rogers’ attempt to find the legendary route through the Pacific across the unmapped Western U.S.–a shortcut to the Orient.  However, most of the film deals with a raid by Rogers Rangers (a company of colonial soldiers attached to the forces of British General Amherst).  Incidentally Amherst was another real-life figure who is immortalized in Amherstburg, Ontario, (near Windsor), Amherst, New York (A Buffalo suburb) and Amherst, Massachusetts.

The year is 1759 and Rogers and his two hundred men set out on a raid on an Indian village just across the Canadian border, to wipe out a band of marauding Abenakis.

Director Vidor, a renowned director of action films, superbly captures the difficulties of their joining, portaging heavy boats, marching through swaps, wading through icy rivers, constantly dodging French troops.  The raid on the village at St. Francis is handled with Vidor’s characteristic sweeps and flair.

In Spencer Tracy, of course, Vidor had one of the finest actors America has ever produced.  By 1940 he was a seasoned veteran with almost 20 years of stage and screen experience behind him.  Like Gary Cooper, Tracy made it all seem so easy, with his projection of intelligence and integrity, shrewdly underplaying when the occasion called for it but dominating the screen with his presence.  He seemed, like Cooper, to be playing essentially, himself.  Nevertheless he learned his profession well, and between 1936 and 1967 received nine Academy Award nominations.  Tracy is the only actor to be awarded the Oscar in two consecutive years, for Captain Courageous (1937) and Boys Town (1938).

Northwest Passage is set in a period–the early days of America–which oddly enough, has received scant coverage by Hollywood over the years.  Perhaps it’s just as well, however, that M-G-M didn’t bother with the sequel, for the second half of Roberts’ book seems of considerably less interest than the first.