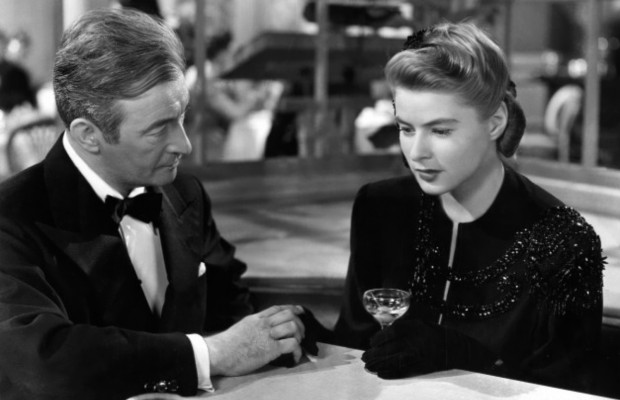 Production and directorial skill of Alfred Hitchcock combine with a suspenseful story and excellent performances to make “Notorious” force entertainment.  It’s a romantic drama of topnotch caliber that will pay off big.

The Ben Hecht scenario carries punchy dialog but it’s much more the action and manner in which Hitchcock projects it on the screen that counts heaviest.  Of course the fine performances by Cary Grant, Ingrid Bergman and Claude Rains also figure.  The terrific suspense maintained to the very last is also an important asset.

Story deals with espionage, the picture opening in Miami in the spring of 1946.  Miss Bergman’s father has been convicted as a German spy.  Yarn shifts quickly to Rio de Janeiro, where Miss Bergman,

known to be a loyal American, unlike her father, is pressed into the American intelligence service with a view to getting the goods on a local group of German exiles under suspicion.

Inducted into espionage through Cary Grant, an American agent with whom she is assigned to work.  Miss Bergman, because she loves Grant, doesn’t want to go through with an assignment to feign love for Claude Rains, head of the Brazilian Nazi group.  She finally does so under the mistaken notion Grant does not love her.  She even goes so far as to marry Rains that she may get the desired information, which revolves around iranium ore deposits which have been discovered by Rains’ gang in Brazil.  When Rains and his mother discover that they have a spy under their roof, they go about poisoning her, but in a very dramatic final scene Grant rescues her.

This is Miss Bergman’s best job to date.  Opposite her Grant gives an excellent account of himself, while Rains is also tops.  His mother is played very effectively by Madame Konstantin.  Among members of the Rains ring, all of whom are well cast, are Reinhold Schunzel, Ivan Triesault and Alex Minotis.  Louis Calhern acquits himself creditably as boss of the U.S. Intelligence force in Brazil.

Impressive sets and colorful backgrounds, as well as the music, give the picture outstanding production value.  Photography, including special effects, is of the best.

NOTORIOUS, screen play by Ben Hecht; directed and produced by Alfred Hitchcock for RKO-Radio Pictures.  At the RadioCityMusic Hall.

It is obvious that Alfred Hitchcock, Ben Hecht and Ingrid Bergman form a team of motion-picture makers that should be publicly and heavily endowed. For they were the ones most responsible for “Spellbound,” as director, writer and star, and now they have teamed together on another taut, superior film. It goes by the name of “Notorious” and it opened yesterday at the Music Hall. With Cary Grant as an additional asset, it is one of the most absorbing pictures of the year.

For Mr. Hecht has written and Mr. Hitchcock has directed in brilliant style a romantic melodrama which is just about as thrilling as they come—velvet smooth in dramatic action, sharp and sure in its c

haracters and heavily charged with the intensity of warm emotional appeal. As a matter of fact, the distinction of “Notorious” as a film is the remarkable blend of love story with expert “thriller” that it represents.

Actually, the “thriller” elements are familiar and commonplace, except in so far as Mr. Hitchcock has galvanized them into life. They comprise the routine ingredients of a South American Nazi-exile gang, an American girl set to spy upon it and a behind-the-scenes American intelligence man. And the crux of the melodramatic action is the peril of the girl when the nature of her assignment is discovered by one of the Nazis whom she has wed.

But the rare quality of the picture is in the uncommon character of the girl and in the drama of her relations with the American intelligence man. For here Mr. Hecht and Mr. Hitchcock have done a forthright and daring thing; they have made the girl, played by Miss Bergman, a lady of notably loose morals. She is the logically cynical daughter of a convicted American traitor when she is pressed into this job of high-echelon spying by the confident espionage man. The complication is that she and the latter fall passionately and genuinely in love before the demands of her assignment upon her seductive charms are revealed. And thus the unpleasant suspicions and the lacerated feelings of the two as they deal with this dangerous major problem form the emotional drama of the film.

Obviously, that situation might seem slightly old-fashioned, too. But Mr. Hecht and Mr. Hitchcock have here treated it with sophistication and irony. There is nothing unreal or puritanical in their exposure of a frank, grown-up amour. And Miss Bergman and Mr. Grant have played it with surprising and disturbing clarity. We do not recall a more conspicuous—yet emotionally delicate—love scene on the screen than one stretch of billing and cooing that the principals play in this film. Yet, withal, there is rich and real emotion expressed by Miss Bergman in her role, and the integrity of her nature as she portrays it is the prop that holds the show.

Mr. Grant, who is exceptionally solid, is matched for acting honors in the cast by Claude Rains as the Nazi big-wig, to whom Miss Bergman becomes attached. Mr. Rains’ shrewd and tense performance of this invidious character is responsible for much of the anguish that the situation creates. Reinhold Schunzel and Ivan Triesault are good, too, as Nazi worms, and a splendid touch of chilling arrogance as a German mother is added by Madame Konstantin. Louis Calhern and Moroni Olsen are fine in minor American roles.

Check up another smash hit for a fine and experienced team.