Toronto Film Society presented Nurse Edith Cavell (1939) on Sunday, November 8, 1987 in a double bill with The Man I Killed [Broken Lullaby] as part of the Season 40 Sunday Afternoon Film Buffs Series “A”, Programme 3.

The first film produced under the arrangement for the distribution of British films in the US and the exchange for British and American stars by Wilcox and RKO was Nurse Edith Cavell.  This film was a sober and dignified account of the English nurse in Belgium during WWI whom the Germans executed.  Although some effort was expended to avoid appearing one-sided, this film’s effect was anti-German.  Miss Neagle’s heart-felt performance in it added to her public stature as a feminine personification of the British ethos.  The picture was made in Hollywood, and in the expectation of producing additional pictures there, Wilcox and Neagle brought with them several of their colleagues at Pinewood.  But WWII was declared the week Nurse Edith Cavell opened in NYC and Wilcox and Neagle made only three more pictures in Hollywood.

Owing to a slight change in the international relations of 1928, Nurse Edith Cavell did not unleash such vast elemental forces of controversy within the British Empire as did its silent predecessor, Dawn, which was also produced by Herbert Wilcox.  In that peace-loving epoch, the German Ambassador protested; Sir Austen Chamberlain, speaking in Commons as “an English gentleman,” indignantly refused to see the picture; the Countess of Oxford and Asquith deposed: “When the efforts of every civilized nation are being directed toward peace and good will, it can serve no good purpose to revive the ugly memories of war.”  But for the 1939 release, owing to the aforementioned slight change in international relations, there had been no whisper of protest this time from the Chamberlain family.  Unconstrainedly, without thought of diplomatic complications, Mr. Wilcox’s second edition of Edith is a dispassionate, uninflammatory and deeply affecting tale of individual heroism under the crushing influence of modern warfare.  Transcending its obvious propagandistic aspects, the film becomes an eloquently factual preachment against militarism, and may be said to be anti-German only in so far as the Germans were pro-war. 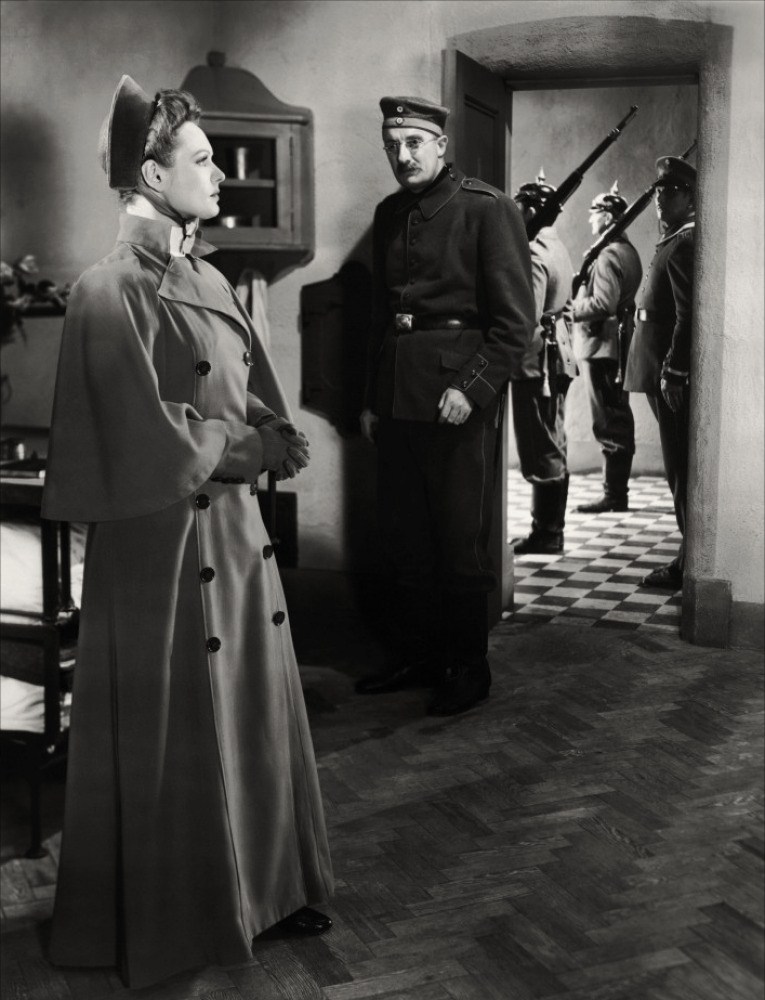 Anna Neagle wrote about her experience on this film in her autobiography.  To begin research, she visited the Imperial War Museum and the curator helped her get in touch with Miss E.B. Wilkins, who had been Nurse Cavell’s Assistant Matron in Brussels from 1912 until they were both arrested in 1915.  Two of the smaller parts in the film were filled by people who had been involved with Nurse Cavell.  One of them was Joseph Schenck’s (the head of Twentieth Century Fox) butler, a Belgian, who had been a butler to Brand Whitlock, the American Minister in Brussels at the time of Edith’s arrest and execution.  He remembered two of the nurses (one had been the above-mentioned Nurse Wilkins) arriving at the American Embassy in great distress on the night of October 11, 1915, to beg for help in saving the life of their Matron.  The butler played “himself” in the film.  The other small character part was played by a man who had been in the same prison, at the same time, as Nurse Cavell.  He remembered how, when she was taken out for execution, the other prisoners banged on their cell doors in protest, knowing, through that mysterious grapevine which grows in prisons, what was about to happen.  They also had in the cast a German sergeant who had been a German sergeant in the 1914-18 war.  Both Neagle and Wilcox were distressed by the fact that with war on the horizon, and their intention of the film being an anti-war film, they were often either accused of, or congratulated on, making war propaganda; the last thing they had had in mind.  Neagle was told that while the film was being shown in Paris, the invading troops arrived and she and Wilcox were immediately put on Hitler’s blacklist.  However, more comforting was the letter Anna received in 1946 from the Superintendent of the Edith Cavell-Marie Depage Institute for Nurses in Brussels, saying that she had received permission to project the film each year on October 12th, as an example to successive generations of nurses.

The picture has been given topnotch production outlay and contributions of all the technical departments are excellent.  Photography by F.A. Young and Joseph August is maintained in low key to accentuate dramatic effect.

Another silent production based on incidents of the Cavell case, with dramatic additions, was also made in 1918 for an independent company, with John G. Adolphi directing and Julie Arthur, of the stage, portraying the title role.

Notes taken from Films in Review