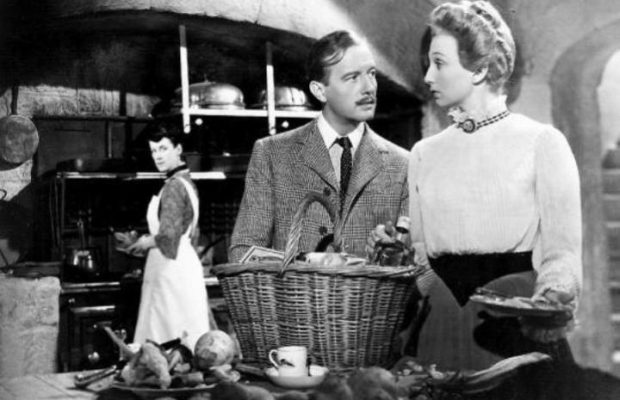 Toronto Film Society presented On Approval (1944) on Monday, December 10, 2018 in a double bill with An Ideal Husband as part of the Season 71 Monday Evening Film Buff Series, Programme 3.

Plot: Two wealthy Victorian widows are courted tentatively by two impoverished British aristocrats. When one of the dowagers suggests that her beau go away with her for a month to see if they are compatible, the fireworks begin.

Fun Facts: Stage sensation Beatrice Lillie made only six feature films between 1926 and 1967. The play upon which this film is based opened on Broadway at the Gaiety Theatre on October 18, 1926 and ran for 96 performances, until January, 1927.

“Minor British gem showcasing the hilarious Bea Lillie as a woman who decides to give her prospective husband a trial run, with unexpected results. Drawing-room comedy par excellence. Leading man Brook also directed, produced, and co-wrote the script (from Frederick Lonsdale’s play)—the only time he ever worked behind the camera!” 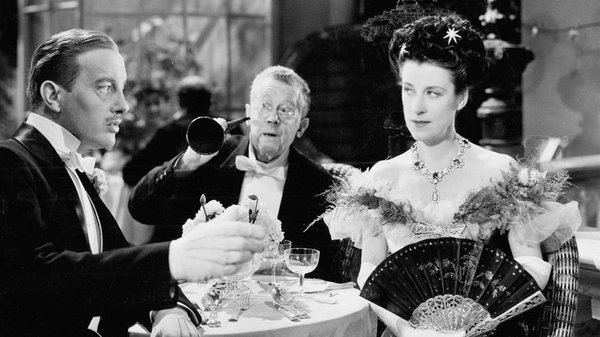 “It won’t appeal to everyone; those who have no taste for whipped cream, or for fancifully antiquated drawing-room-battle-of-the-sexes contraptions, will respond poorly to On Approval. Whatever, their loss. Relatively unknown in America, this impish 1944 film adaptation of the 1926 Frederick Lonsdale comedy provides spacious roles for two peerless actresses. They are Googie Withers, the wry beauty once described by filmmaker Michael Powell as a ‘strange and provocative’ presence, and Beatrice Lillie, the elongated, inspired comedienne of whom critic George Jean Nathan once said: ‘With one dart of her eyes, she can spare a skit writer a dozen lines.’ In the 1920s, well before Noel Coward scandalized the globe with his classic ‘Private Lives’, Lonsdale’s relatively outré premise raised eyebrows. (The play closed quickly on Broadway but found a wide audience in London.) The women are an American pickle heiress (Withers), warm and genial, and her friend, a withering, snappish British widow. The men, one a bona-fide duke without sixpence to his name, are described as having ‘the very highest breeding and the very lowest income.’ Love is in the air for these four, though nobody starts out smitten with the right mate. All four converge on a remote Scottish island for a month-long trial marriage, during which time they realize their hearts are ripe for realignment.

On Approval was filmed in 1930 and then again 14 years later by director and co-star Clive Brook. As adapter, he made a significant change or two to Lonsdale’s play, relocating the action back from the 1920s to the late-19th century. Brook’s sole directorial film effort is no stuffy, stilted affair; it’s fleet-footed and punchy, opening with a brash bait-and-switch series of then-topical World War II newsreel clips full of machine guns and bomber planes. Oh, no, says the narrator, not another war picture! Forget all that for a while. Let’s revisit a time ‘before the days of petrol rationing,’ instead. The movie, revered by many British critics, falls shy of being a classic: Lonsdale was more an efficient craftsman than a divinely inspired comic sensibility. The male characters may as well be labeled NINNY ONE and NINNY TWO, though Brook’s outlandish arrogance as the duke contrasts nicely with Roland culver’s wide-eyed naiveté. Withers and Lillie are another, higher story. Outfitted in some knockout Cecil Beaton-designed Victorian wonders, they’re paragons of high comedy, transcending Lonsdale’s limitations with every knowing aside. Like the great Powell/Pressburger film released a year later, I Know Where I’m Going!, On Approval uses its stormy Scottish locale as an occasion for righting romantic wrongs, the way Shakespeare exploited the nearest forest to sort things out in the wile. My favorite bit has Lillie giving Brook’s nose a good twist out of sheer frustration, and then Brook whining a little later on: ‘She pulled my nose!’ Feeling for something that isn’t there, he adds in a huff: ‘Why isn’t the damn thing bleeding?’”