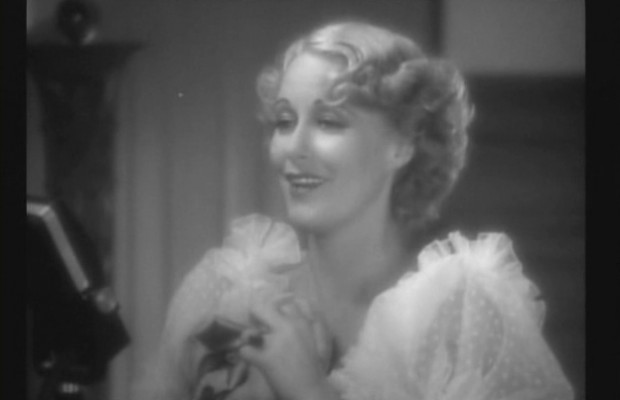 Toronto Film Society presented One Night of Love (1934) on Sunday, April 12, 1981 in a double bill with Roman Holiday as part of the Season 33 Sunday Afternoon Film Buff Series, Programme 9.

It almost beggars belief that Grace Moore was once a popular film star, but at the time she was considered an attractive as well as an accomplished artist.  True, she was skinny at a time when prima donnas were expected to be obese.  Unfortunately, as well as her opera-trained voice, she brought to films too many prima donna characteristics (including tantrums on the set).  She was always inappropriate: her face though not uncomely bore an unhappy resemblance to that of comedienne Joan Davis, disqualifying her for the dainty heroines she ventured to play; too often she frisked about the screen, like a horse thinking it was a kitten.  But here is a contemporary opinion: ‘She is one of the few signers who is easy to look at even when tackling a high C; she acts pleasantly, moves engagingly, has obvious wit and character.’  (C.A. Lejeune on One Night of Love).

She was born in Del Rio, Tennessee, in 1903, and educated at Nashville, where her remarkable voice was first trained; while still a student she sang in a Martinelli concert at the National Theatre, Washington.  She went into operetta and had her first important role in ‘Up in the Clouds’.  She also appeared in some of the Music Box Revues (in 1924 edition she introduced ‘What’ll I do?’) and was in one of the later ‘Hitchy Koo’ shows.  She continued to study voice–with Maraflot–but really turned her attention to higher things when she was befriended by millionaire music patron Otto Kahn: under his auspices she studied in Europe and began to give concerts.  She made her Metropolitan debut in 1928 as Mimi in ‘La Boheme’.

MGM signed her to a contract and put her into two films, A Lady’s Morals (1930), and inept concoction based on the life of Jenny Lind, and New Moon, with Lawrence Tibbett, which kept the songs but threw away the story of the stage version,  Both were resounding failures, and Moore returned to opera and concerts.  In 1933 she starred on Broadway in ‘The Dubarry’, and her success caused Hollywood to look at her again.  She desperately wanted to return to MGM, who had dropped her ignominiously three years earlier, and when she heard that they wanted her for The Merry Widow she was prepared to waive her fee.  But neither she nor Chevalier would accept second billing, and when MGM backed Chevalier, she dropped out and Jeanette MacDonald played the part.  She was consoled by a contract from Columbia at $25,000 per film.  But Columbia had second thoughts and wanted out.  Moore threatened to sue, so they went ahead with One Night of Love in which she mixed ballads with bits of grand opera.  To everyone’s surprise, the public lapped it up (and even more surprisingly, the star was nominated for an Oscar).  Thalberg at MGM now wanted Moore more than ever, and MGM announced that she would appear for them in both Rose Marie and then Maytime; but she missed the schedule on the first and again MacDonald played both parts; ;with the death of Thalberg, interest in Moore at MGM ceased.

Her temperament was a Hollywood byword, and, after Love Me Forever, The King Steps Out, When You’re in Love and I’ll Take Romance (1937), when no further offers were forthcoming, she accepted the lead in Charpentier’s Louise (1939), made in France.  Abel Gance directed it and it was a monumental bore.  She never filmed again, but in 1953–six years after she was killed in an air crash on a Copenhagen runway–Warner Brothers made a biopic, So This Is Love, with Kathryn Grayson as Moore.

By this time, chunks of opera were accepted screen fare.  In 1935 Grace Moore had been a pioneer.  The Society of Arts and Sciences had given her a gold medal for ‘distinctive service in the arts, especially for conspicuous achievement in raising the standard of cinema entertainment’.