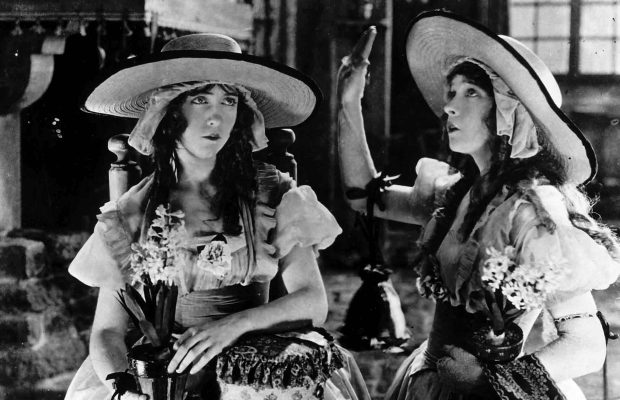 The following programme notes have been kindly furnished by the Programme Director of the Theodore Huff Memorial Film Society, New York City.

Orphans of the Storm is dismissed rather casually by most historians as representing “Griffith in the decline”.  This seems a most unfair and inaccurate generalization.  At worst it can be said to represent Griffith the showman rather than Griffith the innovator.  Here the old maestro was out primarily to make a money picture–but one backed by all the know how and cinema mastery he had acquired in the preceding years.  If there are no new innovations, the old ones are re-employed, polished up, and developed.  The fast, rhythmic cutting in the bacchanal sequence, as the prisoners are released, is one of the finest episodes ever created by Griffith–an exciting and powerful sequence that can rank with the famed machine-gun sequence in Eisenstein’s October, which is preceded by many years.  And even if the climactic mob scenes and the race of Danton’s troops through the streets do seem a repetition of the climax of The Birth of a Nation, what wonderful repetition it is!  Next to the might Intolerance, this film is probably Griffith’s biggest spectacle–sets, crowds, the surge of action, all are out of Griffith’s top drawer.

The film is based on an old stage success, The Two Orphans–a melodramatic tale relying to a great degree on audience acceptance of rather improbable coincidence.  Griffith, no doubt realizing this, and that it was pretty trivial stuff as originally conceived, re-shaped it considerably–to the extent of dumping the whole thing bodily into the French Revolution (which formed no part of the original at all!)  Having made this decision, D.W. as usual went the whole hog, re-creating many actual events, characters, and introducing his beloved “historical facsimiles”.  Many standard reference works were consulted, in particular Thomas Carlyle’s History of the French Revolution.  As with all Griffith’s historical epics, any errors are usually deliberate errors of omission (e.g. one gets the impression at the film’s end that the Revolution is all but over.  Since Danton is one of the film’s heroes, no mention is made of his subsequent execution!)  In every way possible the film is accurate in detail.  Of the dresses and costumes, D.W. wrote: “While many of the costumes, particularly those of the women, may seem strange to our eyes, they are proper duplications of those of the period”.  Of the film’s cost he wrote (presumably as a blurb for ads and programmes): “This production is the most costly of all our efforts both in money and time.  This should mean nothing as long as it pleases the Public, whose servant we are”.

Orphans of the Storm is still wonderfully vigorous and exciting are, and hasn’t dated–except for some of the titles!  But Griffith’s florid titles have always had a certain charm of their own, and taken in the right context add a good deal of flavor.