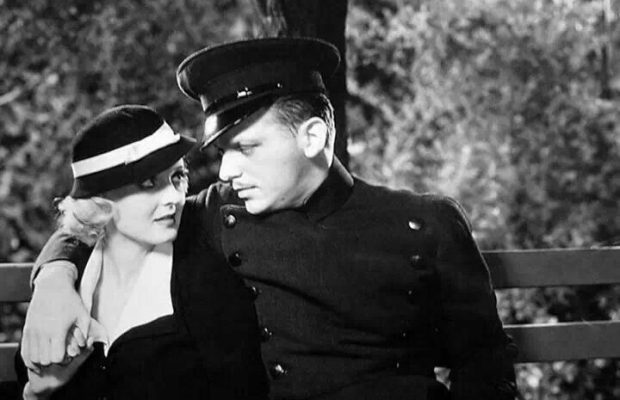 Toronto Film Society presented Parachute Jumper (1933) on Monday, January 13, 2020 in a double bill with I Wake Up Screaming as part of the Season 72 Monday Evening Film Buffs Series, Programme 4.

To praise Parachute Jumper is to defend it. The stars of the movie hated it; those chronicling Bette Davis’ magnificent career ignore it. In such low esteem was the film held that nearly 30 years later, footage from it was used in Whatever Happened to Baby Jane? (1962) as an example of bad acting. More about all that later. First it must be said that Parachute Jumper is fun—a pre-Code film with that spark you’re looking for when you want to watch one. The characters are young and bold, struggling to survive yet bubbling with vitality. Theirs is a world in which everything is for sale, and sex and violence are the currency. Throw in some fine aerial photography, courtesy of Hollywood pilot Paul Mantz, and you’ve got a perfectly defensible use of 65 minutes.

Douglas Fairbanks Jr. stars as Bill Keller, a United States Marine Corps pilot newly returned to civilian life. Bill and his best friend (and fellow pilot), Toodles (Frank McHugh), need work. Bill, having the advantage of looking like Douglas Fairbanks Jr, has more luck, landing a chauffeuring gig for a horny socialite (Claire Dodd). Her gangster boyfriend, Leo Carrillo (Kurt Weber) doesn’t take kindly to this, however, and plans to kill him. In the end he hires him instead, first as muscle, then as a pilot, running—Bill assumes—illicit booze. Meanwhile, Bill and Toodles’ duo has become a trio. Patricia “Alabama” Brent (Bette Davis) meets Bill in a park, in midday. She approaches him first; Bill incorrectly assumes she’s a prostitute, which offends her less than you’d expect. Soon she’s rooming with them, splitting their rent, helping with meals, and quickly falling in love with Bill.

This being a pre-Code talkie, Bill and Alabama’s living arrangement is dealt with directly. Early on he saunters into her bedroom, just to “see how she’s getting on”, and she threatens to leave. Though Bill swears he has nothing untoward in mind, there is no ambiguity. That Alabama has nowhere to go, especially at that hour of the night, isn’t addressed—and one could argue that this is both an indictment of Bill’s character and a celebration of it, since he does not press the issue further. Fairbanks and Davis had a cordial, if not quite warm, relationship on-set. “[Davis] thought director Al Green’s sense of humor as infantile as the story we were obliged to act out,” Fairbanks wrote, years later. “She was always conscientious, serious, and seemed devoid of humor of any kind. But then, there was not much to be humorous about. It was a job and she attacked it with integrity. …[O]ur only interest was to get the damned thing over with.” This was a frustrating time for the famously driven young actress. She was now working on her fourteenth film, playing another in a series of what she considered to be substandard roles. Not long after this she would take Warner Bros. to court, in an attempt to get out of her contract, in the hopes of gaining more control over her career. Fairbanks, too, had professional concerns. He was good friends with Darryl F. Zanuck, and when Zanuck resigned from Warner Bros., Fairbanks’ relationship with Jack Warner deteriorated. “My first ‘punishment’,” he recalled, “was the withdrawal of a fine story I had approved and the substitution of a sub-average story called Parachute Jumper. I decided to be docile. Today I have no more idea of the story of Parachute Jumper than what anyone may guess from the title.” 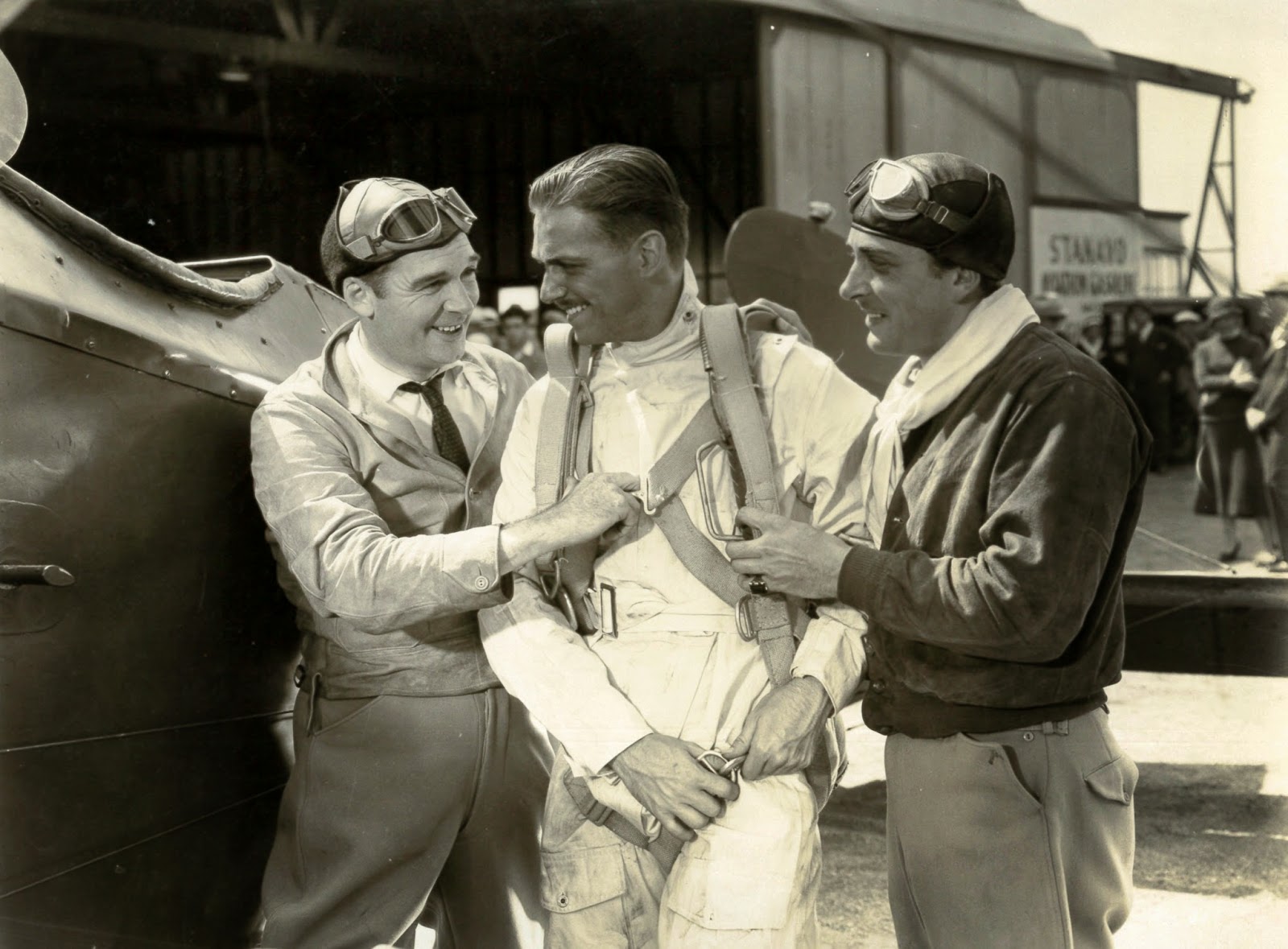 The actors may have felt themselves in Purgatory, but in a sense, they aren’t the real stars of Parachute Jumper anyway. It is the stunt footage that any viewer remembers best: a thrilling sequence that comes early in the film, when Bill, hard up for cash, agrees to a “shoot exhibition”—a parachute jump for the entertainment of a crowd. The jump, as depicted, is complex. Bill must not only exit one biplane; he must climb out onto its wing, then transfer himself to the wing of a second biplane flying alongside. Only then can he dive to his potential doom. The image of the biplane in midflight, bobbing and jerking in the manner that such old-time aircraft did, with a human figure balanced on the extreme end of one wing, as though unbalancing it, is thrilling; even if it is clear that Fairbanks isn’t really in harm’s way. Closeups of the actor are cut seamlessly into the aerial footage, making it clear what he’s doing, and when he tumbles off the wing, there is a moment of uncertainty as to whether something has gone wrong. It is an expertly filmed piece of business, and unquestionably Parachute Jumper’s best moment.

“I don’t think anybody’s ever gonna want that picture again,” grumbles Ben Golden (Bert Freed), the producer tasked with turning Baby Jane Hudson into a grownup star. For the makers of the 1962 horror classic, Parachute Jumper was a useful example of Bette Davis getting it wrong. But don’t take their word for it. If Bill Keller could take a leap, you can take one too.